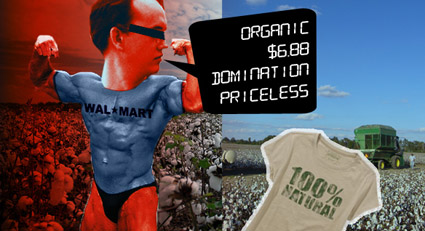 I used to shop at Wal-Mart, until I figured out that low prices based on lousy labor practices and shoddy made-in-China schlock are not such a bargain. But now that Wal-Mart--America's largest food retailer--has jumped on the organic bandwagon, it's making organic products available to folks who lack the access or means to shop at farmers' markets or, say, Whole Foods. Wal-Mart has also made a great show of going green, and just shelled out more than $352 million in what may be the "largest settlement ever for lawsuits over wage violations."

As Elanor Starmer, the Ethicurean"s resident agriculture policy expert, noted a couple of weeks ago, Wal-Mart has a terrible track record when it comes to workers' rights. So, I felt compelled to ask Elanor, can Wal-Mart ever be a force for good? Is it OK to advocate shopping there if it's the only way you can get your hands on organic stuff (even if it's industrial organic)? Elanor graciously took time out from her holiday sledding to shed light on whether Wal-Mart's been naughty or nice:

This is the perennial question, isn't it? Wal-Mart is so huge that it's easy to make the argument that any "good" thing Wal-Mart does - from stocking organic food to changing to energy-saving lightbulbs - makes a huge impact. And in a sense, that is absolutely true. But its potential to make a huge positive impact in one arena can't be viewed in isolation from its potential to hugely screw things up in other arenas. Looking at the sum total seems to be the only way to answer that question fairly.

On the plus side, it's pretty clear that Wal-Mart has gotten organic food into the hands of people who might not otherwise buy it or have access to it. But a major caveat is the quality of organic product that Wal-Mart actually provides. Wal-Mart isn't just a seller -- it's also a buyer, one that is able to offer lower prices to consumers (and still turn a massive profit) in part by lowering the prices it pays to its suppliers. In many cases, lower prices equals a lower-quality product. We saw this play out publicly when Wal-Mart decided to offer organic milk: Organic Valley was originally bidding for the contract along with Horizon (owned by dairy giant Dean Foods, which controls some 60% of the organic milk market in the US). Reportedly, Organic Valley dropped out of the bidding process because it realized that it couldn't maintain its high standards, including the tradition of offering its farmer-members a "fair" price for milk, given what Wal-Mart was willing to pay. Horizon ended up with the contract.

So is that good for consumers or not? Not so much. Consumers buy organic milk for a lot of different reasons -- because the cows aren't fed synthetic hormones or antibiotics, because they have access to pasture (and some studies suggest that grass-fed cows produce healthier meat and milk products than cows fed grain), because organic producers have to manage their dairies in more environmentally-responsible ways than conventional dairymen may, or because they want to help keep family farms in business by paying them a fair price for milk. What we're seeing with Horizon and other industrial-organic dairies is that the pressure to sell milk cheaply becomes pressure to cut corners on the organic standards. Horizon and Aurora, another big organic milk company, have been sued by the Cornucopia Institute for violating the standards by confining cows in giant feedlots rather than letting them out on pasture. The USDA has been pathetically lax in forcing the big guys to comply with the rules. As a result, consumers buying organic milk at Wal-Mart are getting milk that is far closer to the conventional stuff than most of them would probably ever imagine.

If consumers want to pay more for milk from cows that are fed organic feed but otherwise raised in conditions not unlike those of their conventional brethren, then Wal-Mart will help them do that. If they want healthier milk from cows that munch on pasture, where family farmers are able to care for the animals and the land because they're paid a fair price, then Wal-Mart isn't the answer. And as the pressure on suppliers to provide organic food at very low prices gets stronger and stronger, we'll see fewer domestic family farms able to compete and more organic food coming in from China and elsewhere, where enforcement of the standards is even weaker than it is here at home. The U.S. organic movement has spent so long building strong organic standards - it would be a tragedy if the label went the way of so many downtown shopping areas, drained of all its life by Wal-Mart's market power.

There's one more angle to this issue as well, and that's the fact that in addition to being a seller and a buyer, Wal-Mart is also an employer. Wal-Mart's labor track record is horrendous -- riddled with union busts, gender discrimination, refusals to pay overtime or provide health benefits or pay decent wages (the average full-time associate's salary was $13,000 a year in 2001) -- and the result is a major population of workers who struggle to put food on the table. It's arguably Wal-Mart's pathetic labor record, not its organic food sales, that has the greatest impact on the health of low-income consumers. After all, Wal-Mart workers are also consumers, and Wal-Mart is the single largest employer in the United States.

I can't help but think that there has to be a better way to increase access to organic food. I recently read a 2004 report by the House Committee on Education and the Workforce that estimated that one Wal-Mart store with 200 employees costs U.S. taxpayers over $420,000 per year in subsidies for free or reduced school lunches for the employees' kids, Section 8 housing assistance, public health care coverage, and other programs. That begs the question of whether, instead of using that taxpayer money to effectively subsidize Wal-Mart's operating costs, we could use it to increase poor households' access to healthy and organic food in other ways. I mean, does it really have to be a choice between Wal-Mart organics and no organics at all? I am definitely not an expert on food access policy, but I know there are other options out there; WIC coupons that can be redeemed at farmers markets are but one small example.

If we want to increase low-income access to organic food, pay family farmers a fair wage for their sustainability efforts, and safeguard the strength of the organic label - all requirements for a healthy, functional organic system - we'll need new policy solutions. That's not a short-term fix by any means, but anything less won't get us where we want to go. In the meantime, each of us will have to decide whether or not to shop at Wal-Mart -- and not delude ourselves about what we're getting if we do.
Download
Calling all HuffPost superfans!
Sign up for membership to become a founding member and help shape HuffPost's next chapter
Join HuffPost
Follow Kerry Trueman on Twitter: www.twitter.com/kerrytrueman
Voting Made Easy
Register to vote and apply for an absentee ballot today
Register now