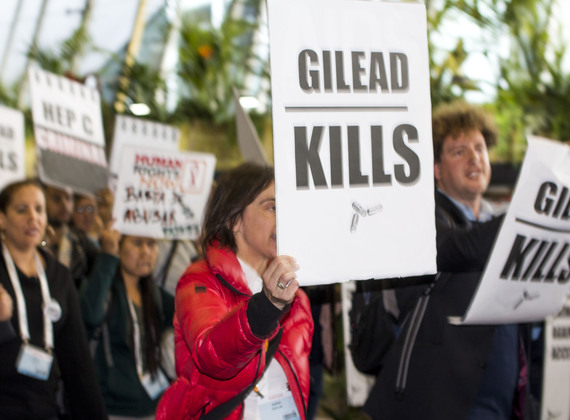 Protestors at the 20th International AIDS Conference in Melbourne, Australia

This year's 20th International AIDS Conference in Melbourne, Australia, was marked by a catastrophic loss before the first red ribbon was donned by any of its attendees. Malaysia Airlines Flight 17 was carrying six conference delegates, including Dr. Joep Lange, a Dutch AIDS researcher, a pioneer in the field of HIV/AIDS activism and a former president of the International AIDS Society. Although much of the initial IAC coverage focused on this untimely tragedy, the various components of the conference carried on as researchers, activists and pharmaceutical representatives gathered to discuss the latest in all things HIV.

Thursday was panning out to be a seemingly ordinary day in the goings on of the IAC when the shouts of a group of protesters began rumbling throughout the Melbourne Convention Center halls.

It would appear that, with signs reading "Gilead Kills," these protestors were up in arms over the pharmaceutical company that holds the overwhelming majority of HIV medications. But once they marched through the halls of Melbourne Convention Center and surrounded the glossy and impressive Gilead pharmaceutical exhibition -- the first brand you see when entering the exhibitor's room -- it became clear that another pill was the target of the chant.

The drug that these protestors were angry about is called sofosbuvir (Gilead markets it as Sovaldi), and it is used to treat hepatitis C. It is the first of its kind and is considered a breakthrough therapy for hepatitis C- and for HIV-positive people battling co-infection.

But this new miracle pill comes with a very big price tag. A single pill of Sovaldi costs $1,000, and the normal 12-week daily dose prescribed to most patients comes in at a whopping $84,000.

So the protestors surrounded the glitzy Gilead exhibition and demanded to have their voices and their concerns heard. They shouted in anger, demanding to have Gilead answer their questions while accusing the drug company of being cowards whose greed is taking precedent over the fight to save lives.

"We want Gilead to explain, number one, what they're basing their price, whether it's $84,000 in Europe and the United States, or even $2,000 in another country," said Karyn Kaplan, director of international hepatitis and HIV policy and advocacy at the Treatment Action Group in New York City. "We want to understand what is their price based on and why won't they give a price that will be affordable to all who need it."

Researchers at the University of Liverpool claimed that the hepatitis C cure could be produced for a few U.S. cents a pill, and that even pricing the medication at $1 a pill would yield a hefty profit for Gilead. So why the ridiculously exorbitant markup?

When Gregg Alton, executive vice president for corporate and medical affairs for Gilead Sciences, was asked about the reasoning for the cumbersome price, his answer raised more than a few eyebrows.

Alton said that, when evaluating the price, the public should consider that a patient who is cured of hepatitis C is free from the disease and also free from the costs of future treatments.

"So actually on a cost basis, if you just look at pure cost, it is actually less expensive than treating HIV, because HIV, being chronic, if you actually put the cost of actually treating for life, it turns out to be more," Alton said. "And, again, the other thing is that we actually hope the cost comes down. That's the purpose of the generic licensing."

Good news for the people with hepatitis C, but bad news for those with HIV who will continue adhering to one of Gilead's five HIV medications. Good news for Gilead as well. Last week the company announced second-quarter sales of Sovaldi at a staggering $3.5 billion. It would appear that the estimated 150 million people around the world who are reported to be living with the chronic liver disease are eager to be cured, come hell or high pharma bill. And it would appear that Gilead is banking on it.

Protesters were also shaming the drug company for altering the prices for some countries depending on their ability to pay. Alton confirmed that Sovaldi will be priced differently around the world. He says that Egypt, for example, a country with a high rate of hepatitis C, will receive the drug for as little as $300 per month.

Gilead is no stranger to accusations of unfair prices and a refusal to relinquish patents on their incredibly lucrative HIV medications. By far, the company holds the lion's share of the market when it comes to antiretroviral HIV medications. Their brand Atripla is the most popularly prescribed HIV drug on the market, followed up by other one-a-day pills such as Complera, Stribild and Truvada, which is now also prescribed as pre-exposure prophylaxis, or PrEP. Each of these pills has a price tag exceeding $1,000 a month. Stribild, Gilead's newest pill du jour, comes in at $28,500 per patient per year in the U.S. And as Alton points out, these medications come with a lifelong prescription. So while Gilead lacks in an immediate financial jackpot -- like Sovaldi -- the company makes up in long-term, forced customer loyalty.

And boy, is Sovaldi a jackpot. Early estimates indicate that it will be one of the company's most lucrative prescriptions to date. Sales are expected to rival the pharmaceutical juggernaut Lipitor.

After nearly two decades of constant protests for AIDS research and demands that people living with AIDS and HIV to be treated as humans, Gilead has escaped the brunt of the AIDS activists' anger -- partly due to near exhaustion from the fight. Although many patients and doctors alike have shamed the company for refusing to relinquish certain patents or reducing the cost of pills, Gilead has remained the largest beneficiary of the AIDS epidemic to date.

"We are not at all against Gilead making money," said Kaplan. "They are a corporation; they are a for-profit entity. So we all recognize and agree that originator companies make investments, and they should be appropriately rewarded. However, what that appropriate reward is -- and the lack of transparency in how pharmaceutical originators [pharmaceutical companies] come up with that price -- is not in touch with reality."

The thing about greed is that even if you have more than anyone else, you are never satisfied with enough. This time, however, Gilead may have just awoken a sleeping giant.