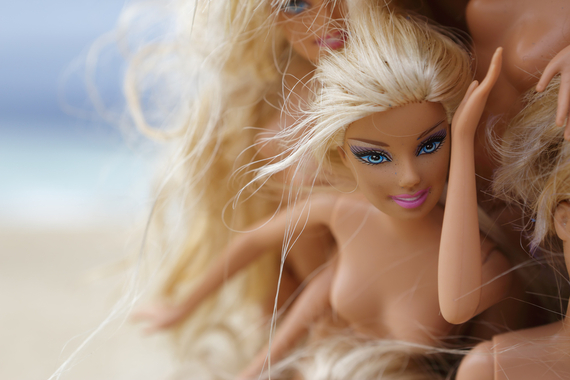 It's not a new idea.  As far back as the 1800s we have been making toys that seem to talk to us. From simple dolls that could only say "Mama" to the 80s' Teddy Ruxpin or the 90s' Furbies, we have long been fascinated by the idea of toys that could play with children.

Now, Mattel and its partner ToyTalk have brought Barbie into the 21st century with an Artificial Intelligence (AI) driven doll called Hello Barbie.

Hello Barbie has a microphone concealed in her necklace that records what anyone says to her and transmits it to the servers at ToyTalk. There, the recording is parsed, analysed, and the correct response selected and sent back for Barbie to deliver -- all in under a second.

Every one of Barbie's potential conversations is mapped out, like the branches of a tree, with more than 8,000 lines of dialogue available to her as possible responses. Barbie also remembers what children say, storing answers to be used later in conversation.

If, for example, a child says their favorite musician is Taylor Swift, Barbie will remember and might bring it up in an exchange days or weeks later. And unlike Siri or Cortana, who use automated voices, every line Barbie speaks is recorded by an actor, giving her a more lifelike sound. Updates will be recorded periodically so that Barbie is always up on the latest pop culture.

The result is not something that would ever pass a Turing test, but easily fits into a child's worldview, which is predisposed toward more magical thinking -- especially when it comes to wanting her toys to come to life.

But some experts are not sure a Barbie that gets this personal with a child is a good idea.

The Campaign for a Commercial-Free Childhood has launched a campaign it calls #HellNoBarbie warning parents against the toy.

One major reason? Barbie isn't the only one listening.

All of the child's responses are recorded and stored on ToyTalk's servers, where parents and employees of ToyTalk, Mattel, and their undisclosed partners can listen back to the conversations.

The conversations become part of a huge cache of data that the companies say will only be used to help improve the technology, but will hold all kinds of insights into what children say, do, like, and don't like.

The Campaign for Commercial-Free Childhood asserts, "Even parents shouldn't listen to secret recordings of their children!"

ToyTalk has said in a statement that the data collected will not be used for advertising purposes, but the potential is certainly there. If Barbie can remember that your child loves Taylor Swift, she can -- theoretically -- also be sure to let that child know when Taylor's new album is out or when concert tickets go on sale.

In addition, critics worry that a Barbie who can direct the conversation can also have a huge impact on how a child sees herself.  In 1992, a more primitive version of a talking Barbie, Teen Talk Barbie, was roundly criticised for phrases she used like, "Math is tough."

The Mattel and ToyTalk teams were extremely cognizant of this, but even the 2015 version has lines of script that say things like, "Now let's talk about something really important... FASHION!"

The bottom line is that Hello Barbie is likely to be just the first in a long line of AI enabled toys that will take advantage of deep learning algorithms to interact with us in more and more realistic ways.  Google and other companies are already predicting that we will eventually use voice commands more than typing on our mobile devices.

And so -- ready or not -- Hello Barbie may be the wave of the future for a generation of kids who will grow up totally accustomed to having inanimate objects answer back.

I'd be interested to know your thoughts. Would you buy a Hello Barbie for your kids? Is it just a cool toy, or something more?  Let me know in the comments below.