"There never really was a Big Bad Wolf," my hunter father taught me when I was raised on a U.S. Forest Service wilderness in the High Sierra. "Wolves are all gone from these forests." Then he added, "But the wolf is a mighty hunter. And wolves have tight-knit families--just like us."

Like the wolf packs, my family hunted and lived off wild game. Growing up, my father would take me along on his hunting trips to keep camp. These hunters weren't looking for trophies, so much as sustenance. Their job as men, alpha males, and fathers was to feed their families. 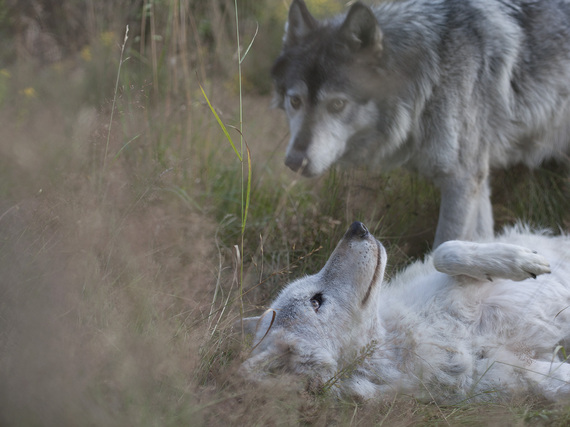 This Father's Day, I'm reminded of how I grew up strong on my father's wild game, by a current New York Times editorial, arguing that the "alpha male stereotype comes from a misunderstanding of the real thing. In fact, the male wolf is an exemplary male role model."

Wolves and men as good role models are also echoed by Diane Gallegos, Executive Director of Wolf Haven International, a nationally recognized sanctuary for captive-born and displaced wolves in Washington State. Even among these sanctuary wolves, she says, it's all about family--and alpha males are loyal providers. They really are Big, Good Wolves. 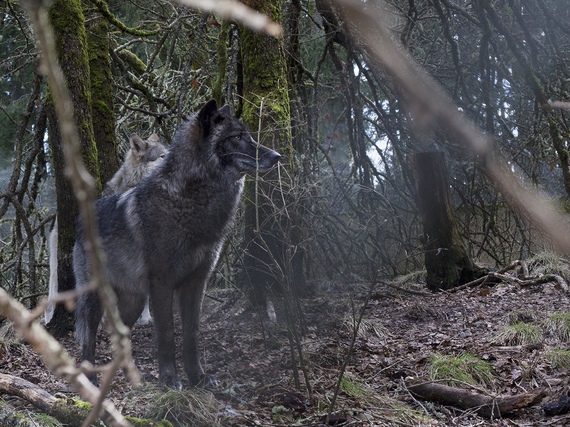 Gallegos explains that in May, the Mexican Gray Wolf pair gave birth to a litter of three pups as part of the Species Survival Plan (SSP) captive-breeding program. The Mexican Gray Wolf, also known as "the lobo," is one of the rarest mammals in the world. Every pup born now is crucial to the survival of this most highly endangered subspecies of gray wolf. The wolves cared for at Wolf Haven--mother (Nieta) and father (Coal)--are fond, attentive parents as documented in this video of Nieta (F962) and Coal (M752) nuzzling. As in the wild, Coal then regurgitates to feed his mate and pups.

Like many human hunters, alpha male wolves hunt food for their family packs year-round. Men and wolves should be respectful allies, not enemies. We need more positive stories of wolves and men. Here's one of my favorite:

My friend, Mike, a strapping hunter who is deaf and loves gardening and boat design, tells the story of hunting with his Alaskan buddies. "I was alone up on the ridge with a grizzly nearby and a pack of wolves just below me," he says. Not the best position as night and cold descended. "I tell you, I was afraid of those wolves and one of them was acting kinda crazy, spinning around and howling. Maybe he was playing."

Finally Mike had to risk hiking down to camp. Most of the pack had moved behind him. "But I had to scoot right past that lone wolf . . ." he pauses with a smile and the punch line: "And when I got back to camp, it was my buddies who duct-taped me in my sleeping bag--and then, they threw me in the river."

Like Mike, there are many hunters who understand the beneficial top-predator role that wolves offer. Since wolf reintroduction, scientists have discovered that when wolves return to their natural habitats, they actually help restore the ecosystem: Overgrazed trees regenerate and there's a dramatic increase in biodiversity.

Here in Washington we're still in the very early stages of wolf recovery. Wolves are on the state's endangered species list; to recover they need 15 breeding pairs. Currently, there are only five such pairs, out of 16 packs--68 wolves total. Can Washington now manage its wolf reintroduction more sustainably than other states, like Wyoming, Idaho, and Montana who focus on "lethal control"?

"We have an historic chance to be a model for wolf management," adds Diane Gallegos.

She credits the collaborative work of the Wolf Advisory Group to listen to sportsmen, ranchers, and wolf advocates as they focus on science, education, and enlightened solutions. Ranchers are learning non-lethal and practical tools to protect their livestock, employing range riders (off-vehicle herders) and not grazing sheep near known wolf ranges. If ranchers sign a cooperative agreement with state wildlife officials to practice "conflict avoidance" they can receive radio collar alerts when wolves are near livestock.

Pacific Wolf Coalition reports that 100,000 West Coast residents joined one million citizens from across the country urging the government to maintain federal protection for gray wolves--even as a new bill threatens to reverse recent wolf protection and revive brutal wolf hunts in the West.

Jim Dutcher of Living with Wolves explains, "When you decimate a pack--especially the experienced alphas--you end up with a younger, dysfunctional, and smaller pack. The young wolves don't know how to take care of themselves or hunt down larger prey. So they go after slower, easier livestock."

Alpha males teach the young to maintain and assure the survival of the family pack. It's not about dominance--in fact the alpha female is a true peer with her mate. Alpha males, comments wolf biologist, Rick Intyre, demonstrate a "quiet confidence and self-assurance . . . You know what's best for your pack. You lead by example . . . You have a calming effect." 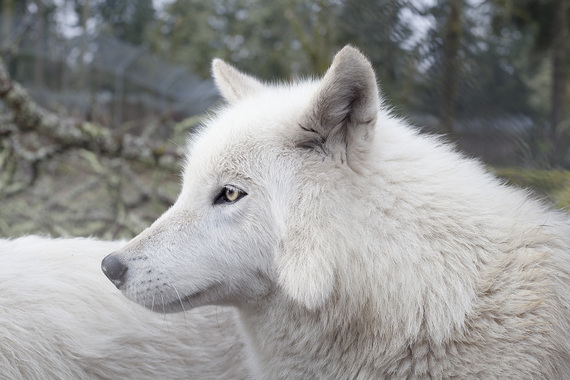 We can find a calmer, more sustainable and balanced way to live with wolves, based on science, not politics. Or prejudice. The key is dialogue, education, and social tolerance. As rancher, Sam Kayser, who pastures his cows on public land near Teanaway, explains, "I want to co-exist with wolves . . . there is room for all of us out there."

And this Father's Day there is room for many more stories of Big Good Alpha Males, both human and wolf.

Brenda Peterson is a National Geographic author of 18 books, who has covered wolf issues for national medias since the Yellowstone reintroduction in 1995. Short sections of this article originally appeared in "Living with Wolves" Ampersand magazine. For more: www.BrendaPetersonBooks.com

Sign a petition to help stop wolf hunting in Alaska.