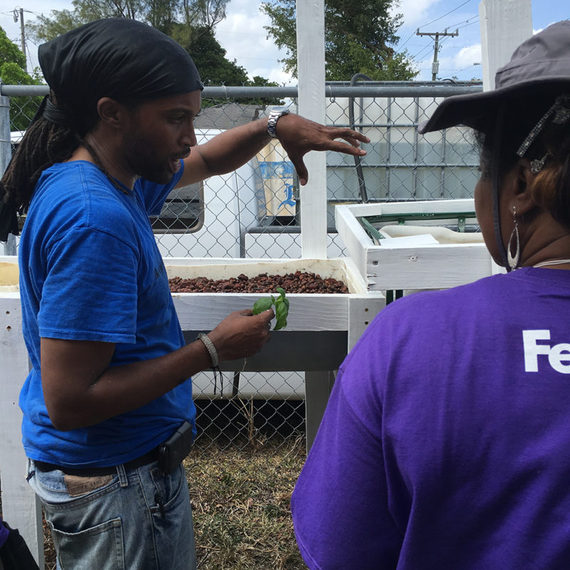 After a lifetime of eating with disposable knives and forks, Michael Caballero, a 25-year-old industrial engineer at FedEx, looked the plastic cutlery in his workplace cafeteria in a new way. "I think in terms of process," he says, tallying the environmental upheaval required to manufacture each fork -- the extraction of oil from the ground, the overseas shipping, the refining and molding in a factory, the waste created by its packaging -- a massive amount of pollution created for just a few minutes of usage before being tossed in a landfill.

Today, thanks to EcoTech Visions, a Miami incubator for green enterprises, Caballero's 18-month-old company, Earthware, Inc., is building better disposable silverware. At EcoTech Visions's current headquarters in Liberty City, Fla., Caballero is a member of a class of 26 "ecopreneurs" who receive 15 months of support and have access to office space, manufacturing equipment and other environmentally-minded folks. In the co-working space, architects and designers chat with electricians and engineers -- a technical collaboration that's rare but vital to successfully manufacture products, from battery-run motorcycles and aquaponics systems to plastic-based handbags and aloe salves.

The buzzing incubator is the vision of Dr. Pandwe Gibson, an African-American businesswoman who wanted to spark a sea change in commerce by supporting green jobs, particularly manufacturing ones. Because the consequences of environmental harm are so visible in southern Florida (as atmospheric temperatures rise, the sea levels follow, causing the Atlantic's high tides to annually creep nearly one inch closer to the art deco real estate along Miami's coastline), city residents are eager to embrace products that won't further damage the Earth in the process. When Gibson first came up with EcoTech Visions three years ago, she used her iPad to share the idea with anyone who had time to listen to her elevator pitch. Since its launch, the incubator has created 15 new jobs, won grants for nine of its companies to work on prototypes and helped three other businesses obtain seed funding to kick start operations.

Last year, EcoTech was one of NBCUniversal Foundation's 21st Century Solutions grant challenge winners, supporting progressive community solutions. "What we love is that it has the four Cs -- it's a catalyst for out-of-the-box solutions, it offers a destination for collaboration, it's building a community for idea-creators and problem solvers and it's driving local change by expanding small businesses and jobs," says Beth Colleton, senior vice president of corporate social responsibility at NBCUniversal.

EcoTech Visions played a vital role in helping Earthware produce a durable alternative to the 16 billion pieces of plasticware thrown away in America each year (its cutlery is made with a corn-based resin that decomposes in just six months) and grow to its current state. Perhaps most importantly, the incubator covers the entry-level costs that can prohibit a business from entering the market -- office space and manufacturing equipment -- while Caballero still works at Fed-Ex to make a living. Without the support, he would have needed to front the money for Earthware's first injection molding machine (which spits out products in the shape of pre-made molds) and a consultant to help him pick the right one; instead, Caballero pays a small rental fee to EcoTech in order to use the machine they purchased on his behalf.

Additionally, the incubator introduced Caballero to other locals that could bolster his burgeoning enterprise, including sustainability advocates and potential customers, like the local school board, which recently put out a request for compostable cutlery bids. "The whole goal is to become a leading provider of compostable, sustainable products, using Miami as a hub into Latin America and the Caribbean," footholds to an international expansion, Caballero says.

Clean tech and green manufacturing, as sectors, could provide the biggest hope of restoring jobs that have been lost due to the historic decline in American manufacturing (nationwide, about 5 million have disappeared since the millennium). Unlike other compostable products, which ship foreign-made cutlery to the U.S., Caballero's eco-friendly business aims to create high-paying, manufacturing jobs right here in America; the two dozen other companies at EcoTech Visions will only add to this green wave of business. Caballero believes green industries will be most successful if others join the movement. The demand for sustainable products is already there, he notes, but supply will only match those levels if more entrepreneurs and manufacturers arrive on the scene. Even though they'll technically be his competitors, there will be enough supply that prices will fall and consumers generally will see planet-friendly products as the new standard.

EcoTech Visions is looking to expand nationally, starting with Los Angeles next. If it achieves its goals, not only will Caballero be just one of countless American manufacturers producing environmentally-conscious items and providing jobs around the country, but the incubator could find itself leading the United States into the green industrial revolution.

EcoTech Visions is a recipient of last year's 21st Century Solutions grant powered by the NBCUniversal Foundation, in partnership with the NBCUniversal Owned Television Stations. The grant celebrates nonprofits that are embracing innovative solutions to advance community-based programs in the areas of civic engagement, education, environment, jobs and economic empowerment, media, and technology for good.