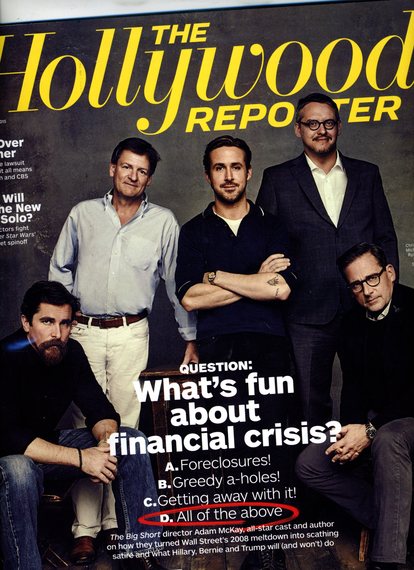 A cover story in the November edition of The Hollywood Reporter was, in my opinion, the best promo for The Big Short. The cover said it all:

What's Fun About the Financial Crisis?
A. Foreclosures
B. Greedy a-holes!
C. Getting away with it
D. All of the Above

"All of the Above" is highlighted in bright red and while the film is "fun" to watch, the damage done in the wake of the meltdown is not. Nevertheless, The Big Short is as powerful an indictment of Wall Street's major con job as you can expect from Hollywood and a title card at the end makes this abundantly clear (no need to proffer any spoiler alerts).

When the dust settled from the collapse, 5 trillion dollars in pension money, real estate value, 401k, savings, and bonds had disappeared.

Clearly, the filmmakers and cast were impacted by the events leading up to the meltdown with Brad Pitt telling Variety that "too many people lost their homes, their savings and families were put on the streets, yet no one was held accountable"

I left the Paramount press screening of The Big Short pumping angry testosterone just dying to get home and start banging out my own J'accuse. But I kept hearing Brad's admonition about Bad Bankers and their lack of culpability.

Maybe Brad could take the lead and spearhead a crusade to make sure that the message of the film is heard on Main Street? After all, we're entering a contentious electoral season with candidates screaming at one another and while they do Wall Street schemes and strategizes on how best to take advantage.

It's also Academy Award season and The Big Short's principals -- supported by legions of publicists/agents/managers/lawyers -- are angling for nominations and a shot at the Golden Man and it would certainly be a shame if they get their deserved kudos then kiss and run to the next project (which is the usual advice of the aforementioned publicists/agents/managers/lawyers).

I've got some skin in The Big Short game worth mentioning. In 2007, when I was represented by Hollywood talent agency, CAA and beginning work on a documentary, Tale of Two Streets, about the unfolding foreclosure crisis my then agent took the idea to Plan B for a possible partnership but didn't get any traction.

It was understandable... the shit hadn't really hit the fan.

Hollywood has a long history of social activism and like it or not celebrities with passion, commitment, and more than half a brain cell can snatch the public's attention and whether it's George Clooney on fracking; Sean Penn on the horrors of post-earthquake Haiti, or Jessica Lange on the human damage wrought by farm foreclosures, people do listen. One may argue about how long they'll listen before tuning in the Kardashians but it's a worthwhile effort considering how much is riding on the actions of the next President.

If you thought that the crisis brought an end to all those Quant-created financial weapons of mass destruction ("CDO's" "Credit Default Swaps"), think again. Another title card reminds us that Wall Street is taking the same old discredited bullshit and recycling the crap; something Goldman Sachs calls a " bespoke tranche opportunity," as if they were selling high quality Saville Row suits.

Goldman Sachs is just one of several institutions counting on the stupidity of investors to make the same old mistakes again and there are no shortage of financial industry retreads working hard to profit off the misery of those they originally helped make miserable. Whether it's homeowners or students - "distressed debt" - is the place to be for these so-called Garbage Collectors.

And speaking of retreads: who can explain the resurrection of Neel Kashkari? As the controversial interim treasury secretary he lorded over some $700 billion bucks of Tarp bailout dough destined for Wall Street's coffers.

Now, if you ever want to see the perfect take-down - by a pissed off Republican Congressman, no less -- it's well worth watching Illinois' Don Manzullo instructing a sheepish Kashkari on the differences between Main Street and Wall Street.

You'd think that a dressed down Kashkari would go slinking off - tail between legs - to spend some quality time away from the public spotlight.

Like some fledgling Citizen Kane bent on satisfying a craving for political power he decided to make a run for California's governorship. Despite a hefty investment of time and money he lost to Jerry Brown.

So what was his consolation prize?

On January 1, 2016, he'll ascend to the head of the Minneapolis Federal Reserve thus injecting himself back into the inner circle of one-per centers who decide the economic fate of the rest of us. The Goldman gang, it seems, consider these top Fed jobs as positions of entitlement..
.
In a sidebar interview in The Hollywood Reporter Brad Pitt explains that he's angry and "nothing's really changed."

Brad, we need you to keep fighting the good fight and help to spread the flames of Wall Street discontent.

It'll be a mitzvah.

Joel Sucher is a filmmaker/writer with Pacific Street Films and frequent contributor to Huffington Post. He's also written on the consequences of the financial meltdown for publications that include American Bankerand In These Times.