We're an enigma, those of us born at the tail end of the '70s and the start of the '80s. Some of the "generational" experts lazily glob us on to Generation X, and others just shove us over to the Millennials they love to hate. No one really gets us or knows where we belong.

We've been called "Generation Catalano", "Xennials", and "The Lucky Ones", but no name has really stuck for this strange micro-generation that has both a healthy portion of Gen X grunge cynicism, and a dash of the unbridled optimism of Millennials.

A big part of what makes us the square peg in the round hole of named generations is our strange relationship with technology and the Internet. We came of age just as the very essence of communication was experiencing a seismic shift, and it's given us a unique perspective that's half analog old school and half digital new school.

You Have Died of Dysentery

If you can distinctly recall the excitement of walking into your weekly computer lab session and seeing a room full of Apple 2Es displaying the start screen of Oregon Trail, you're a member of this nameless generation, my friend.

We were the first group of kids who grew up with household computers, but still novel enough to elicit confusion and wonder. Gen X individuals were already fully-formed teens or young adults when computers became mainstream, and Millennials can't even remember a time before computers.

But, when we first placed our sticky little fingers on a primitive Mac, we were elementary school kids whose brains were curious sponges. We learned how to use these impressive machines at a time when average middle class families were just starting to be able to afford to buy their own massive desktops.

This made us the first children to grow up figuring it out, as opposed to having an innate understanding of new technology the way Millennials did, or feeling slightly alienated from it the way Gen X did. 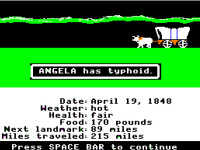 Did you come home from middle school and head straight to AOL, praying all the time that you'd hear those magic words, "You've Got Mail" after waiting for the painfully slow dial-up internet to connect? If so, then yes, you are a member of the Oregon Trail Generation. And you are definitely part of this generation if you hopped in and out of sketchy chat rooms asking others their A/S/L (age/sex/location for the uninitiated).

Precisely at the time that you were becoming obsessed with celebrities, music and the opposite sex, you magically had access to "the Internet," a thing that few normal people even partially grasped the power of at the time.

We were the first group of high school kids to do research for papers both online and in an old-fashioned card catalogue, which many millennials have never even heard of by the way (I know because I asked my 21-year-old intern and he started stuttering about library cards).

Because we had one foot in the traditional ways of yore and one foot in the digital information age, we appreciate both in a way that other generations don't. We can quickly turn curmudgeonly in the face of teens who've never written a letter, but we're glued to our smartphones just like they are.

Those born in the late '70s and early '80s were the last group to have a childhood devoid of all the technology that makes childhood and adolescence today pretty much the worst thing imaginable. We were the last gasp of a time before sexting, Facebook-shaming and constant communication.

We used pay-phones. We showed up at each other's houses without warning. We often spoke to our friends' parents before we got to speak to them. And we had to wait at least an hour to see any photos we'd taken. But for the group of kids just a little younger than us, the whole world changed -- and that's not an exaggeration. In fact, it's possible that you had a completely different childhood experience than a sibling just five years your junior, which is pretty mind-blowing.

Thanks to the evil genius of Sean Parker, most of us were in college in the heyday of Napster and spent many a night using the university's communal Ethernet to pillage our friends' music libraries at breakneck speeds. With mouths agape at having downloaded the entire OAR album in under five seconds, we built our music libraries faster than any other dorm-dwelling generation in history.

We were the first to experience the beauty of sharing and downloading mass amounts of music faster than you can say, "Third Eye Blind," which made the adoption of MP3 players and music streaming apps perfectly natural. Yet, we still distinctly remember buying cassette singles, joining those scam-tastic CD clubs and recording songs onto tapes from the radio. The very nature of buying and listening to music changed completely within the first 20 years of our lives.

A Youth Untouched by Social Media

The importance of going through some of life's toughest years without the toxic intrusion of social media really can't be overstated. MySpace was born in 2003 and Facebook became available to all college students in 2004. So if you were born in 1981-1982, for example, you were literally the last graduating class to finish college without social media being part of the experience.

When we get together with our fellow Oregon Trail Generation friends, we frequently discuss how insanely glad we are that we escaped the middle school, high school and college years before social media took over and made an already challenging life stage exponentially more hellish.

We all talked crazy amounts of shit about each other, took pictures of ourselves and our friends doing shockingly inappropriate things and spread rumors like it was our jobs, but we just never had to worry about any of it ending up in a place where everyone and their moms (literally) could see it a hot second after it happened.

But unlike our older Gen X siblings, we were still young and dumb enough to get really into MySpace and Facebook in its first few years, so we understand what it feels like to overshare on social media and stalk a new crush's page.

Time after time, we late '70s and early '80s babies were on the cusp of changes that essentially transformed modern life and, for better or worse, it's shaped who we are and how we relate to the world.

Anna Garvey is the Director of Content and Social Media for WebRev Marketing & Design, a boutique firm in Chicago. In past lives, she's also been an ex-pat in Italy and a 6th grade teacher on the Southside of Chicago. When she's not scouring the internet for social media and blog fodder, she enjoys Netflix binges, soulful music and New Orleans culture.