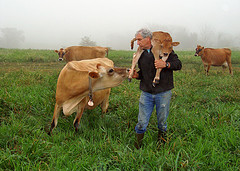 Michael Pollan said "For the food movement," this may be "the most important election this year." Slow Food chef Kurt Michael Friese named it, The Most Important Race You Never Heard Of. And Change.org wrote, "There are a lot of important face-offs going on throughout the country, but none may be more important to farmers and food activists than the race in Iowa for Secretary of Agriculture."

We're talking Francis Thicke versus incumbent Bill Northey. It's the archetypal challenge between cutting edge farming methods that can create a healthy and sustainable agricultural system (that's Thicke, pronounced tick-ee), versus industrial methods that push top soil into our streams, animals into confinements, toxins into our environment, and farmers off the land (that's Northey, pronounced Monsanto).

The race is statistically a dead heat. If Thicke wins, Food. Inc. director Robert Kenner says he will be "a game changer who can fix our agricultural system." Grist says, "it would be a huge win not only for sustainable agriculture in Iowa, but the nation. And it would send a clear message to Congress as lobbyists and activists begin putting on their battle overalls for the next Farm Bill."

Although this sounds like a lot to expect from one small state election for Ag Secretary, it's not just any state, and it's not just any candidate. "Iowa is one of our agricultural heavyweights," says the Iowa Independent, which also predicts that Congress will definitely pay attention to whoever wins this election."

"Iowa has always focused the nation's agricultural vision," says author Bill McKibben, who founded the global climate change organization 350.org. "We need Francis Thicke," he says, "to help frame that new vision, right in the middle of the Heartland."

According to Fred Kirschenmann, a father of the sustainable farming movement, "Thicke's vision for Iowa agriculture is informed by his own experience as a farmer and by his academic study and research."

For the past 27 years, Francis Thicke has run a successful organic dairy farm just outside my little town in Southeast Iowa. Folks here know and love his Radiance Dairy milk, yogurt, cheese, and ice cream, which Francis processes right on his property. In fact, local restaurants post signs bragging that they use Radiance Dairy. Francis has got the small town farmer thing down.

But Francis is also a scientist. He has a PhD in agronomy and a masters in soil science. Moreover, he has applied his expertise advising numerous state and national government committees, agricultural universities, extension agents, and research organizations over the past three decades. He has served on so many groups and is so deeply connected with the nation's farmers, that whenever I speak at farm organizations anywhere in the country and mention where I'm from, people invariably say with a warm smile, "Well you must know my friend Francis Thicke."

Yes I'm proud to say that I've known Francis for many years. And although I thought I knew him pretty well, when I started his book A New Vision for Iowa Food and Agriculture (free download), I realized just how brilliant he was and how pivotal he can be. On the one hand, he manages the intricate systems on his own farm, including a solar powered watering system and a cow grazing program that "mimics the prairiegrass/bison ecology that contributed to building the Midwest's deep, fertile prairie soils." On the other hand, Francis lays out practical and proven strategies for a complete agricultural makeover, where successful farmers can grow fuel, boost the economy, and contribute healthy delicious food to local communities. As Food, Inc's Kenner says, "Francis Thicke has a vision of how our agricultural system can work that will benefit our communities, our farmers and the consumer."

"When one combines a scholarly understanding with on-the-farm practice," says The Land Institute's Wes Jackson about Thicke, "it's hard to beat." That's the hope of those working round the clock in the week before the election.

But they are reminded of Northey's dark tactics used in the final days of his last election. Trailing behind another organic farmer, he poured lots of big-Ag's money into a smear campaign, which allowed him to just squeak by on Election Day. And apparently he's been paying them back ever since.

Will Iowans re-enlist an Agriculture Secretary who is a mouthpiece for huge corporations, or will they go for Thicke's "New Vision?" Author and legend Wendell Berry says, "I think we need people who take agriculture seriously, for a change, and I trust Francis Thicke to take it seriously."

Jim Hightower, a well-known populist, himself the former Agricultural Commissioner of Texas, says:

"In Iowa's election for Secretary of Agriculture, the choice couldn't be clearer. On one hand, you've got Francis Thicke, who has worked as a dairy farmer for 27 years, selling his products locally and actually building the economy. On the other hand, you've got Bill Northey who has led a team that invested $1 million in Brazil's ethanol production. In a world where money talks, maybe Bill Northey should be running for Secretary of Agriculture in Brazil."

I hope Northey doesn't take Jim's recommendation seriously. I've visited Brazil many times and they already have far too many Monsanto men running the show. And for that matter, so do we. I'm looking forward to finding out on November 2nd how many Iowans agree.

Jeffrey M. Smith is the Executive Director of the Institute for Responsible Technology and the international bestselling author of Seeds of Deception and Genetic Roulette. He has seen first hand how the corporate driven industrial agriculture model, embodied by Monsanto and promoted by their hand-picked candidates, has devastated farmers, economies, and ecosystems around the world.