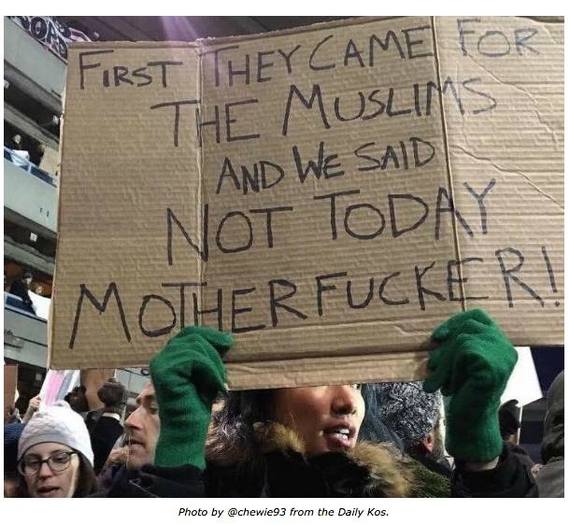 It's refreshing that for once Jews aren't at the front of the line for rounding up and persecution.

I don't often play the Jew card, but this time, an exception. Because we as Jews have a particular understanding of what it means to be the target of religious persecution, and special insight into where incremental restrictions on freedom of movement, association, and commerce can lead. As I remind my wife Kate often, we've been seeing it for the last 5,000 years.

The Muslim ban is not about defeating terrorism. It would have done nothing to stop any of the terrorist attacks in recent memory - not 9/11, not San Bernardino or Boston or Orlando, not Oklahoma City. The ban is about identifying an enemy, sowing divisions and creating chaos as a precursor to increasing state control and persecution, something with which we as Jews are all too familiar. To think that Jews will somehow escape unscathed in a country engaging in religious persecution is to deny history and the evidence right in front of our eyes.

The ban was announced on Friday, Holocaust Remembrance Day. That same day, the White House put out a statement on the Holocaust that failed to mention the 6 million Jews killed. This was not an inadvertent error. It was, by their own admission, a deliberate effort to be "inclusive" and not single out any specific group, because all lives matter (sound familiar?).

Josh Marshall from Talking Points Memo summed it up best: "It is true that millions died under the Nazis who were not Jews. They included targeted ethnic groups like Roma (Gypsies), homosexuals, left-wing dissidents, people with disabilities, etc. But it has long been a trope of Holocaust deniers and white nationalists to insist that Jews were only incidentally targeted. In any case, there are no word limits in presidential statements. A more logical and worthwhile approach would be to note the various groups who were victimized. This isn't accidental. The new administration is riddled with anti-Semites and those who want to cater to anti-Semites." Jews who think there's no danger, that they're not coming for us this time, should think again - there are many white supremacists inside and outside this administration who would welcome the opportunity to prove you wrong.

There are certain things our country must never do. State-sanctioned religious discrimination is one. Pretextual policies, deprivations of liberty, and ignoring court orders all in furtherance of government-sanctioned religious discrimination is unacceptable under any circumstance. It's part of what makes us Americans. Mr. Henderson taught me that in 8th grade. By reading the Constitution. Where it says so in the very first amendment. Trump's order changes nothing.

There's been a lot made that the ban is not religiously based, not discriminatory, not that big of a deal because it's only temporary. Which to me is more of the same "are you going to believe me or your lying eyes" bullshit we've been getting out of Trump's minions this past week. But Trump said it was a ban on Muslims during the campaign. Giuliani said the same just yesterday. They tried to ram it through narrow legal loopholes and got caught. And now they're paying for it in the currency of America's reputation and who knows how many lives lost. Until we see any indication that this is anything other than a first step in a broader effort to demonize Americans of color, we have to assume the worst from an administration that has lied to us repeatedly since their first days in office. And we have to oppose it completely - not after it has progressed to become intolerable, not only when it affects us or our communities personally, not only when it affects everyone, but when it affects anyone.

The biggest fuck you we can present to Donald Trump is to use his efforts to sow division between us as a rallying cry to unite around what we all share as Americans, and to build a movement strong enough to defeat him, his unconstitutional actions, and his anti-American aspirations.