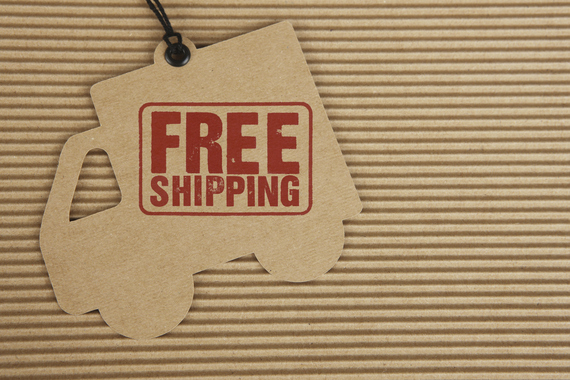 Do you know what is driving higher conversion rates on e-commerce sites?

Big data, from multiple sources in real-time, crunched by powerful programs that ultimately recommend products to you based on where you are, what you have bought in the past, what people like you are buying right now, the weather, your travel plans and your credit score... to name just a few of the inputs?

Simple little data, which takes what you just looked at and keeps serving it wherever you go online?

One? Some? None? All of the above?

If you said none of the above, you are going in the right direction - bottom line, it ain't the vaunted algorithm. Nope...

It is the newest and most powerful asset of the digital e-commerce age: FREE SHIPPING.

That's right -- FREE SHIPPING.. .an innovation of our time that changes a customer's relationship with the merchant in magical and powerful ways and drives up that all-important conversion rate, meaning that more transactions are completed and fewer goods are left to rot in e-shopping carts.

If you detect a mild sarcasm here, you are no Sherlock Holmes -- in fact, you are 100% wrong, off base, no clue.

Mild sarcasm? No way. Deep and disgusted sarcasm? Yes...in fact, I'd say the level of digibabble found in analysts' portrayal of FREE SHIPPING is beyond anything else I have ever seen before.

Only a few months ago the Wall Street Journal reported:

"Free shipping was supposed to be a temporary enticement in the early days of e-commerce, but customers came to expect it, and even demand it."

And so, as the WSJ further reported:

"In a recent survey of 5,800 US online shoppers, half said they have abandoned an order if they didn't qualify for free shipping...and nearly 90% of retailers offer some sort of free shipping options, compared with about 65% two years ago."

As someone who was an early online retailer mixing catalog and digital sales, I can tell you that for eons direct sellers viewed shipping as a profit center. In fact many products that were advertised as free or two-for-one made serious profit margins for their sellers because of the shipping costs. And of course return shipping has always been an inhibitor to purchase...which is why catalog merchants began offering free returns...funded of course by overall shipping costs.

"Online shopping site Zappos was among the first to offer free delivery, but it was done as a surprise for select customers," said Carol Spieckerman, retail consultant with New Market Builders in Bentonville.

"Customers very quickly started expecting it...the game changer, though, is when retailers like Wal-Mart are doing it...shipping is no longer going to be a game or a profit center for retailers."

"For Online and Brick and Mortar, the Holy Grail is for those to become sort of a seamless, blurred channel."

Lee Peterson, Executive Vice President for creative services for WD Partners in Dublin, Ohio, said shipping costs have always been an "inhibitor" from the shopper's point of view. Consumers are smart enough to know that if they are buying, in store, a product manufactured in China, the cost of shipping the product is built into the price...remove shipping charges to customers, and online purchases are likely to rise even faster.

Peterson said retailers can make their margins in categories other than the items they ship for "free":

"More than anything, the customer never likes to be told, 'I'm going to charge you for these things that you've always gotten for free.'... Retailers can build the cost into price as they currently do with MasterCard or Visa fees."

Build the cost in, raise those prices, then it's not really free -- but a "sucker is born every minute," so they say....

Scott Galloway is a professor at NYU and a great cynic whom I admire. His view of current e-commerce practices is simple:

And for the sake of our discussion on shipping charges he points out the following:

"We have revealed Amazon's Achilles' Heel -- shipping costs are exploding and non-sustainable -- they forced everyone else to do free shipping -- two-thirds of Christmas shopping came free when it used to be one-third..."

He points to a list of the online businesses that are growing faster than Amazon...

And finally Target, which also began shipping for free, had a good season:

"Target's investment seems to have paid off. Its online conversion rate among holiday shoppers, or the proportion of visits that turned into purchases, rose to 58% in December 2014 from 31% in 2010, according to Kantar Retail ShopperScape data."

And of course the next battleground will be same-day shipping, followed by just giving away the merchandise without cost....

Look, let's be clear -- FREE SHIPPING, SAME-DAY SERVICE, is not new -- Sears might have pioneered it in the late 1800s and L.L.Bean claims to have invented it in 1912 -- both companies are still in business BTW....

But neither just gave it away...nor claimed it to be anything more than it was -- a customer benefit that the customer actually paid for, one way or another.

What gets me is the lemming line of analysts who gush over tactics that were once tried and true -- and Lazarus like have been resurrected from the graveyard of margin death -- paraded around as innovation -- and linked to digital as if they are native...

Folks -- this is what kills true innovation -- this is what inhibits original thinking -- real client service -- and by the way, if you follow the crumbs I have scattered, it should give you a good and true view of just how well big data plays are currently working online, despite all the hype.

And more -- in China, same-day door delivery seems slow compared to their holiday tradition of "hongbao" -- gifting cash-stuffed envelopes to friends and family -- that is now delivered by mobile.

What drove Tencent's success over Alibaba is key -- "a tie-up with state broadcaster China Central Television, whose New Year's Eve gala is the country's most-watched TV program. At specific moments during the broadcast, WeChat users could shake their phones for a chance to win cash gifts."

Time to step back. Look at business plans. Understand consumers. Deeply understand consumers reward them, incent them, excite them, just don't give it away or you too will become a mere commodity and disappear like so many others.

"Macy's and Home Depot said on Tuesday that they were still trying to untangle gridlocked shipments at West Coast ports, a logistics nightmare that has affected merchants across the country."

And there you have it, digital is everything but not everything is digital.

The challenge of the retail business is the human condition. -- Howard Schultz

In the end it's not the algorithm or the user interface or even FREE SHIPPING -- it's all about the merchandise, the need, the service, the style. In short, the human condition...

Excuse me -- have to finish placing my order for a tube of toothpaste to be delivered free today....love that service....