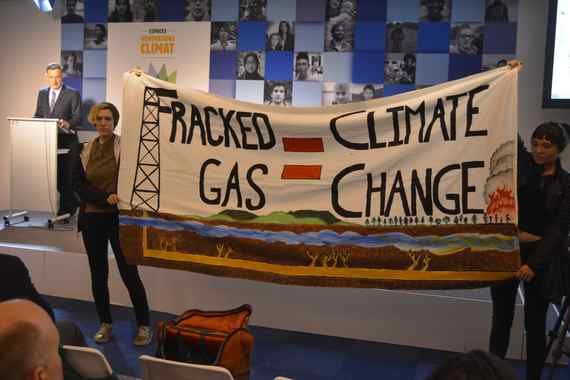 The biggest moments in youth activism at the United Nations climate negotiations (COP21) were focused on limiting global temperature rise, supporting the efforts of the most vulnerable populations, and bringing domestic issues to the international arena. Youth led actions highlighted the necessity of leadership at the national and sub-national level - because without action at home, the Paris agreement won't save us.

On the first day of the negotiations the Climate Vulnerable Forum, a partnership of the countries most vulnerable to a warming planet, adopted the Manila-Paris Declaration. The Declaration represents the most unified call from UN member states for 100% renewable energy by 2050 to keep warming below 1.5℃ - a lower target than the 2℃ agreed upon in Copenhagen in 2009. Unfortunately the announcement was overshadowed by speeches from Presidents Obama and Hollande, so youth leaders from around the world came together with an action to draw attention to the coalition's goal on two days later.

More than 100 international youth gathered inside the conference. We wore circles of face paint around our right eyes to symbolize 0 - zero fossil fuels by 2050, necessary to keep warming below 1.5℃. A march to the COP21 civil society space followed, led by indigenous youth. A major demand from the coalition and the youth action was for the Paris climate deal to reflect the historical and current responsibility of developed countries to lead by commencing an immediate phase out of fossil fuels and providing finance and technology to aid developing nations. Another crucial tenet of the youth mandate was a just transition to renewable energy within countries, ensuring support for workers and fossil fuel dependent communities.

The steady drumbeat to limit global temperature rise to 1.5℃ continued throughout the conference, and led the United States, among other developed nations, to make statements in support of the lower limit.

During the second week, the issue of fracking hit the international stage with a bang. While resistance to fracking in the United States has been extensive - with opposition from local communities at nearly every extraction point, pipeline, gas plant, and export terminal - our political leadership continues to push fracked gas build-out as a solution to climate change.

Throughout COP21, anti-fracking advocates from around the world, including explicitly fracking focused delegates from Thailand, Australia, Indonesia, and across the U.S., were vocal about the need to end fossil fuel extraction. They engaged in rallies, panels, bird-dogging and more to raise the issue.

On Wednesday of the second week, a group of fracking opponents from Vermont, Texas, California, Colorado, the Marcellus Shale region of Pennsylvania, and more brought their concerns to a panel that sought to highlight "local climate leaders" - many of whom support fracking or fracked gas infrastructure.

I interrupted my Governor, Peter Shumlin, to draw attention to his support for a fracked gas pipeline in Vermont. My message: "Fracked Gas = Climate Change". His support for fossil fuel infrastructure is incompatible with climate leadership. The interruptions made waves at home, and helped bring local realities to the global stage.

Finally, youth from around the world pulled together a mass action outside the conference center on the Friday before the weekend the deal was signed. Nearly 500 youth attended, calling for the international community to follow the lead of young people, indigenous communities, and those most affected by climate change. It was a show of power for solidarity with the most vulnerable.

These actions and more called attention to the deep need for domestic leadership. Politicians must follow the young people organizing against fossil fuel infrastructure, for divestment from fossil fuels, and in support of renewable energy, in addition to other people-focused movements - the Fight For 15, the DREAMers, Black Lives Matter and more. We have entered a new phase where no issue lives in a silo, and the connections between all of these movements are becoming clearer by the day.

The Paris Agreement represents a global consensus that climate change is among the most eminent threats to humanity. It is a definitive signal that the fossil fuels era must end, but it is not a road map for how to implement a transition to renewables by 2050 and limit global temperature rise to 1.5℃. In order to ensure the survival of those put most at risk by climate change we need real commitments from our local, state, and national leaders. Our leaders must support a just transition - and as we showed in Paris, young people are committed to ensuring they do.