EAST RUTHERFORD, N.J. (AP) — The last place most people expected to find the San Francisco 49ers through three weeks of the season was last place.

That's where the preseason favorites in the NFC West reside, behind even the Rams. Keeping company with such NFL dregs as the Browns, Bills, Lions and Panthers seems so unbecoming for a franchise supposedly on the rise.

Maybe the Niners will turn it around and surge to the top of a division where the champion just might finish with eight victories. Or maybe they will continue to underachieve, because there are some deep-seated problems in San Francisco.

Indeed, all five of the 0-3 teams have major issues, but none had the expectations placed on them that the 49ers did.

Here's how we see it - the league's most disappointing five teams. 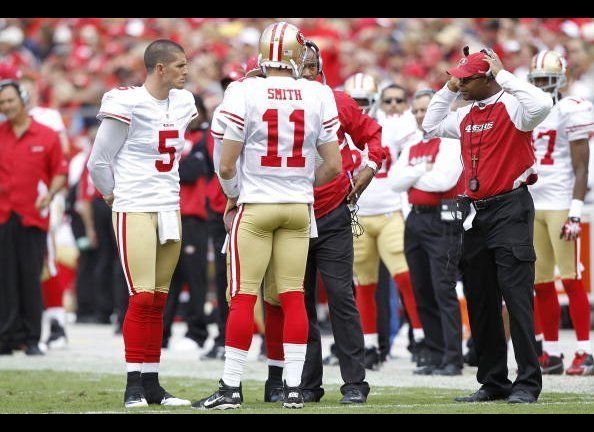 1 / 5
San Francisco 49ers
If 49ers fans are confused by this wretched start, all they need focus on is the confusion on the sideline, in the huddle, in the locker room. Everywhere. The Niners have had communications problems, whether in play-calling, getting defenders lined up properly or even in reaching agreement among the coaches on what to do. Something as basic as having the correct number of players on the field has been an issue at times. San Francisco ranks 27th running the ball, which might be understandable if Frank Gore was sidelined. He's fine, but there's been little running room because of inconsistent blocking, and too much emphasis on the pass, where the line also has struggled: Alex Smith has a 66.2 quarterback rating with seven sacks. Defensively, the Niners have a beast in All-Pro linebacker Patrick Willis. But they've forced only two turnovers and have seven giveaways on offense. Singletary fired offensive coordinator Jimmy Raye on Monday. His own job could be on the line next if the 49ers don't get straightened out. "When you have a situation like we have right now, when you have a team that's 0-3, particularly when you were expected to do great things by the media at the beginning of the season, it is important for us to maintain the focus of being the best team that we can possibly be," Singletary says. "It is our focus to win the division. It is our focus to continue to move forward and get that done." (Photo by Getty Images)
Getty