Brace yourself for another round of ideologically-driven hysteria from wealthy right-wing power brokers, aided and abetted by the entrenched power elite which Bill Clinton and his kind of Democrat have come to represent.

They won't call it "hysteria," of course. They won't even call it "ideology." But they're really peddling an ideologically-driven assault on two of government's finest programs, Social Security and Medicare, in the form of a "Grand Bargain" which President Barack Obama has proven all too eager to embrace in the past.

Don't fall for the hysteria or the hype. Benefits cuts to Social Security and Medicare will only make things worse. Social Security is essentially healthy, and its long-term issues can be fixed by lifting the payroll tax cap. To fix Medicare, which should be our sole concern, we need an overhaul of our health system to remove the corrosive effects of the profit motive on our medical economy.

But they don't want to talk about it.

We appreciate the fact that President Clinton said such eloquent things about Levon Helm, and he's right that Helm "never forgot his roots." Let's hope that the same can be said about the former president's party in the years to come. But the signs aren't promising, and the former president isn't helping. He's planning to peddle more of the Pete Peterson crowd's destructive nonsense next month, and the nation would be better served if he didn't.

The report released today by the Trustees of the Social Security Administration has already occasioned some of the usual nonsense from the wealthy and highly-funded insider group represented by Clinton and his peers in both parties. And they're planning to double down on the budget-cutting rhetoric and the demand for a "Grand Bargain" like the one President Obama tried to cut with Republicans last year. That would involve the same kind of broken austerity-economics thinking that's shattering Europe, and it would spell political doom for Democrats.

More importantly, it would spell financial doom for America's seniors, hurting current disabled and retired Americans and creating even more pain for the generations to come. Is that the legacy that these Democrats want for themselves and their party?

Bill Clinton's the headliner at next month's "Fiscal Summit" of the Peterson Foundation, along with Tim Geithner, Paul Ryan and John Boehner. That's the organization founded by billionaire Pete Peterson to carry out the traditionally right-wing goals he spelled out in the 1980s: to cut Social Security and Medicare and other government programs, and to lower taxes for the wealthiest Americans even more.

Peterson attempts to cloud the ideological divide because he would pay for (some) of these moves through the "liberal" expedient of raising taxes -- primarily on the middle class, that is -- by ending the tax deductions that are often the only slender thread separating ordinary Americans from financial ruin.

Next month's appearance will be a return engagement for the former president. Democrats like Bill Clinton add to the false "bipartisan" gloss of these elite events, when the truly bipartisan positions are those which polls show are shared by many or most Republicans, as well as most independents and Democrats: No cuts to Social Security or Medicare to balance the budget. Tax hikes for millionaires to make up for any shortfalls.

But Clintonite Democrats are all too eager to embrace this false "centrism," taking the lead from the ex-President who made false statements like this one at the last "Fiscal Summit": "... on Social Security it was meant to be self-sustaining, and with the retirement of the baby boomers it won't be anymore."

That's simply wrong. The program was overhauled by the (truly) bipartisan Greenspan Commission in the 1980s, when everyone was fully aware of baby boomers and their impending retirement. It's till self-supporting, and without any changes will still be able to pay 75 percent of projected benefits in 20 years.

Since that shortfall is due to the wealth inequity that exploded over a couple of decades (including Clinton's years as President), eliminating the payroll tax cap would be a simple and elegant fix. But former President Clinton chose to amplify the false fear-mongering instead.

Nobody expects the Spanish Inquisition

In a quote that Peterson's group is using to promote this year's event, last year Clinton also told the radical right-winger Ryan that "if we can break out of theology and get back to evidence and experience and aspirations of ordinary people, I think we can have bipartisan cooperation."

The Peterson crowd loves to accuse its opponents of "theology" or "ideology," and of ignoring "evidence and experience." But here's an enormous body of evidence and experience to consider: that of every other industrialized nation on Earth. Every other industrialized nation has some form of public health financing system -- and costs that are so far below ours that it would fix our budget fears entirely if we could match them.

Our real financial problem is Medicare, not Social Security. Medicare's getting much better financial results that private health insurance in this country, but that's not enough to fix the problem.

The problem isn't that Medicare is a government program: The problem is for-profit healthcare. For-profit hospital and other medical providers have increased their hold over the US healthcare system. Our system for reimbursing doctors encourages overtreatment. We refuse to allow our government to negotiate with pharmaceutical companies. And for-profit health insurance companies fail to manage costs, which makes it increasingly difficult to rein in that portion of the health economy that Medicare supports.

There are effective ways to fix that problem. But instead of explaining that, President Clinton used last year's summit to smear more reasonable members of his party for not yielding to budget cuts, saying, "I think the Democrats are going to have to be willing to give up maybe some short-term political gains by whipping up fears on some of these things if it's a reasonable Social Security proposal, a reasonable Medicare proposal."

The entire "centrist" crowd is quick to slander anyone for looking at the problem with a clear eye and offering solutions that don't fit their own theological (and financially beneficial, at least for the wealthy) preconceptions. And they do it by pronouncing heresy against anyone who differs with them.

Cutting Social Security means never having to say you're sorry

But then, that's how the elites of both parties roll, and they get plenty of help from centrist Democrats who follow the ex-president's lead. Rather that take responsibility for their own actions, the "centrist" crowd prefers to promote the deceptive illusion that both the overall Federal deficit and Social Security's problems were caused by middle-class Americans themselves. The blame itself take different forms: Sometimes they blame Americans for having the temerity to be born in large numbers during the Baby Boom. At other times they blame them for living longer. And at other times they sneeringly dismiss them as "greedy geezers."

But longevity and the Baby Boom didn't cause this downturn in these programs' finances, and it certainly isn't contributing to a long-term deficit. David Shure at Media Matters helpfully links to this CNN chart, which undercuts the conventional wisdom even as the article itself promotes it: 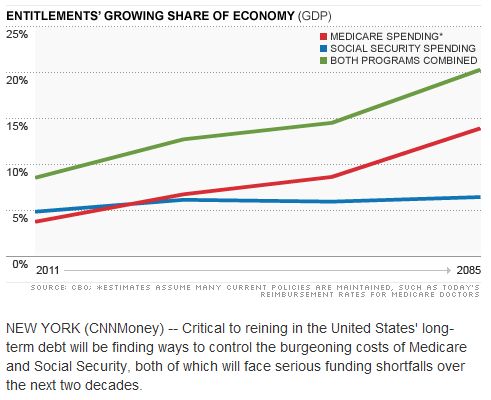 "Medicare and Social Security" don't have a long-term problem: Medicare has a problem. No amount of spin or double-talk can change that.

This year's slight downturn in Medicare and Social Security finances was caused by the financial crisis of 2008, as lost jobs and wages led to lost revenue for the program. And that disaster was caused by the deregulation of Wall Street, which was carried out the same bipartisan crowd that's now pushing cuts to these programs. The longer-term 25 percent shortfall to Social Security was caused by the increasingly unequal distribution of income (see here for more details), which is also the result of the GOP/Clintonite crowd's "bipartisan" policies.

The pseudo-centrists have come to their latest "bipartisan" consensus: Let ordinary Americans pay for the problems they created.

Now they want ordinary Americans to take a hit to both their Social Security and Medicare benefits. A Social Security cut would be needless and counterproductive, and the nation would be better served with a benefit increase (which could be funded as Sen. Tom Harkin proposes). What's more, since Social Security is forbidden by law from contributing to the deficit, it's absurd to connect its financing to discussions of the Federal debt.

Medicare's another story. Unless we address the runaway cost of providing health care to seniors, our Federal budget and are entire economy are in dire trouble. Notice, however, that we said "address the runaway cost" and not "shift the runaway cost," as the Republican proposal first pushed by Rep. Paul Ryan would do. His plan will merely place an arbitrary cap on government spending (although he goes to great pains to conceal that fact). That's is exactly what proposals from pseudo-"centrists" like Alan Simpson and Erskine Bowles push in their personal set of proposals (which is often misrepresented as the work of the deficit commission they co-chaired, which failed to produce recommendations).

But capping government spending doesn't control the cost of health care for seniors any more than cutting the FEMA budget would lower the number of disasters we experience. These plans just shift the cost burden onto seniors -- while at the same time cutting the Social Security benefits that most seniors use as their primary source of income.

President Clinton says "the left" -- meaning those people who speak for a majority of Republicans, as well as Democrats and independents -- don't have a "reasonable" Medicare proposal. But they do, and here it is: Implement a German-style, or Taiwanese-style, or Swiss-style healthcare system. We have the "evidence and experience" to know that it will work.

How do you implement a change this big? Create a public option that's available to all Americans. Free up Medicare to negotiate with drug companies. Rein in rapacious for-profit hospital chains. Redesign our provider reumbursement system.

Steps like these will fix the long-term federal deficit, address any concerns about Medicare funding, and ensure retirement security for all Americans. Will President Clinton use the "Fiscal Summit" to embrace this reasonable and rational approach, or are he and his fellow "centrists" be so bound by their "theology" of budget cuts that they'll help the Right mock and ignore these real solutions instead?

Unfortunately, I think we already know the answer. The question now is whether President Obama will follow the misguided advice of Bill Clinton and his elite pseudo-centrists, as he's tried to do in the past, and whether Nancy Pelosi and other Hill Democrats will fight for Social Security and Medicare ... or join the Clintonites in the theological wilderness of false centrism, dooming their party to defeat and millions of Americans to a future of financial insecurity.

The other possibility is that the former president and the current one could rise to the occasion, reject the scare tactics, and confront our real problems. Which means the real question is this: Will the Democrats forget their roots?