If you're interested in living a long, healthy, and rewarding life, take note of this: There is a direct correlation between how long and how well you will live and the quality of your connection to other people. The Nurses' Health Study at Harvard, the longest running study on health, found that the more friends people have, the less likely they will become physically impaired as they age, and the more likely they will be leading happy, successful lives.

A study in Science Magazine reported that the health risk associated with neglecting our social relationships is equal to cigarette smoking, elevated blood pressure and blood lipids, and obesity. Social isolation also increases emotional reactivity to stress, dumping toxic stress hormones into our system that, when chronic, damage our heart, impair our immune system, alter our DNA, predispose us to depression, and prematurely age us. And, the greater the stress the greater the likelihood of marital problems and family dysfunction. 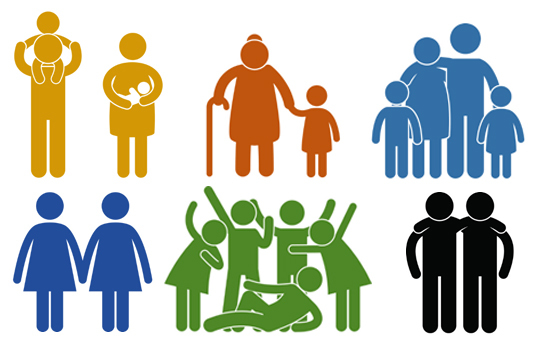 The sense of belonging that positive relationships instill has a great deal to do with how we thrive and succeed. Yet many of us don't get the biological and psychological importance of our connection to one another. Surveys show we are becoming more and more disengaged from friends and family, and we don't join clubs, volunteer, or interact with neighbors as much as previous generations.

Our stressful careers have taken over to the point that people routinely miss family events, and we tend to think we're too busy, too stressed, or too tired to spend time with a friend, forgetting the way that friendship revitalizes us. Our friends actually have an even bigger impact on our psychological well-being than family relationships

It would do you enormous good if you took this moment to reflect on a friend or family member who you've been meaning to connect with, and followed through in doing so. Calendar it and hold yourself accountable to following through. Make this as important to your health as going to the gym or eating healthy foods or not smoking... because it is that important.

Here's the story that led science to come to this conclusion.

The first study to reveal the biological connection between interpersonal connection and health was the Roseto Study. It has come to be called the Roseto Effect. Fifty years ago, medical researchers were stumped by a bewildering statistic in Roseto, Pennsylvania, a village populated mostly by descendants of Italian immigrants. The local health officer discovered that Rosetans were nearly immune to the number-one cause of death in America--heart disease. Cardiac mortality rises with age, but not in Roseto. It dropped to near zero for men aged fifty-five to sixty-four.

Moreover, the local death rate for men over sixty-five was half the national average. This made no medical sense, given that most of the men smoked, drank lots of wine, ate a high-fat diet, and made their living at backbreaking work in a rock quarry. 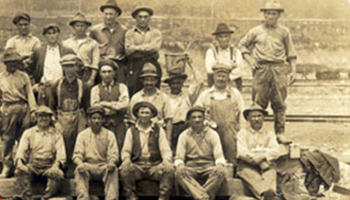 A team of medical researchers from Oklahoma University descended on the village to try to find out why. They pulled death certificates, performed physical exams, and conducted extensive interviews with villagers. But they could find no biological, genetic, environmental, or any other physical reason to explain the people's resistance to heart disease--until one of the researchers stumbled across two telling social factor.

When researchers dug deeper, they found that the community took care of their poor. They also found that family structure in Roseto was close-knit. Nearly all the homes contained three generations, and elders were held in high regard. Mealtimes were much more than a matter of eating; they were family time. Community events were also common in Roseto. In warm weather, neighbors took evening strolls and dropped in to visit one another.

Sociologist John Bruhn of the University of Texas said that Rosetans "radiated a kind of joyous team spirit as they celebrated religious festivals and family landmarks. Their social focus was on the family . . ." 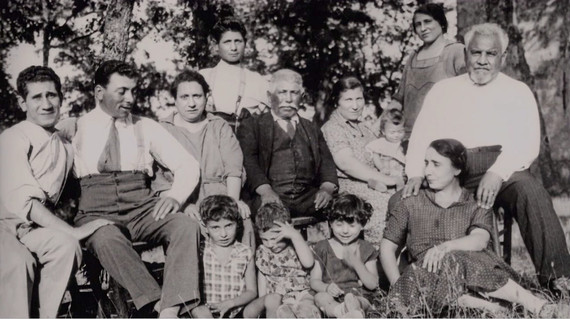 The researchers finally concluded that the village's immunity to heart disease and an early grave was the result of the strong sense of belonging that people felt.

But sadly, the effect didn't last. The children of Roseto went off to college in pursuit of the American dream, and after graduation most of them moved to the big city, where the high-paying jobs were. As a result, the community gradually lost its cohesion, and in 1971 the village recorded its first death of a person under the age of forty-five from coronary disease. It went downhill from there.

In his book, Why Zebras Don't Get Ulcers (p. 107) Robert Sapolsky of Stanford University relates a story about a boy who was severely abused, emotionally and physically. After he became a ward of the court, it was discovered that he had zero growth hormones in his bloodstream. Chronic stress had completely shut down his growth system, threatening his life. He was hospitalized but didn't improve.

During his hospital stay, he developed a close relationship with one of the nurses, undoubtedly the first loving relationship he had ever experienced. To everyone's amazement, his growth hormone levels zoomed back to normal. But no one could explain it at first.

The medical staff got its first clue when his friend the nurse went on vacation. As soon as she was gone, the boy's blood level dropped back to zero. The second clue came when the nurse returned from vacation and his blood level shot up again.

Think about it. The rate at which this child was depositing calcium in his bones could be explained entirely by how safe and loved he was feeling in the world.

Scores of other studies have corroborated the Roseto Effect. In a recent review of 148 separate studies involving a combined 308,849 participants, it was found that people who cultivate strong relationships with friends, family, neighbors, and coworkers improve their odds of survival by 50 percent. More and more, the evidence shows that who we become is not determined by genes alone. Love has a lot to do with turning up the intensity in genes that strengthen us and turning down genes that weaken us.

So, how do you reconnect and stay connected? The formula for sustaining positive relationships is simple but not always easy. Here it is: 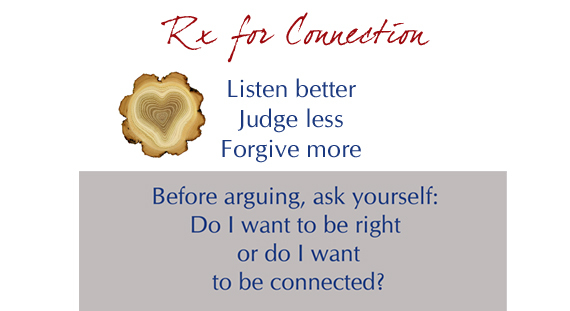 It means listening better, with empathy. It's judging less and accepting people exactly as they are, and it requires a willingness to forgive. No relationship can last long without forgiveness. It also means asking yourself, Do I want to be right or do I want to be connected, when you're about to dig in your heels during an argument with a loved one.