I'm a journalist and author of the new book Tasty: The Art and Science of What We Eat. It's a brief biography of our sense of flavor -- how it evolved, what it is, where it's going. I'm blogging on some of the biological mysteries of flavor.

The hottest food trend of the 21st century is... heat. As American cuisine as a whole has gotten spicier, the spiciest food is reaching truly infernal levels.

The Guinness world record for hottest chili pepper (currently held by one called the Smokin' Ed's Carolina Reaper) has changed hands repeatedly since 2010 as growers compete to breed ever-hotter chilies. The upper bound of chili heat have approximately doubled in that time, from about 1 million to 2 million Scoville heat units (the scale used to measure it, named for the scientist who invented it 100 years ago). This is about 4,000 times as hot as a jalapeño.

Counterintuitive as it may seem, this is one of those rare times that a form of culinary indulgence has measurable health benefits. 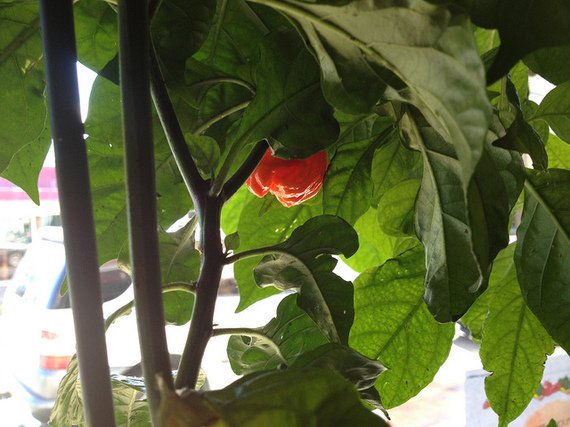 The human affection for chili heat -- a form of irritation -- is mysterious; for painful ultra-hotness, simply bizarre. But taste is not merely a sensation, pleasing or not, in food. It is a biological force. Chili heat taps into the body's heat and metabolic regulation systems in ways scientists are only starting to grapple with. But so far, virtually all of its biological effects are beneficial. Like acetylsalicylic acid, the active ingredient in aspirin, which not only alleviates aches and pains but cardiovascular problems and many forms of inflammation, the compound capsaicin responsible for the burn may be a kind of all-purpose drug, both beneficial and non-toxic (in moderation).

Capsaicin -- ironically, a close chemical relative of vanilla -- triggers receptor proteins in our mouths, nose, skin and eyes that detect heat, tricking the body and mind with a sensation that the temperature is rising. These noxious effects are what make pepper spray so powerful. But they have also been tested for use in therapies targeting cancer cells.

The burning is temporary. Keep eating, and a numbing effect sets in. This secondary action has been used for centuries to treat topical pain, and drug companies have been working to find ways to exploit it more systematically.

Capsaicin also works inside the body; receptors that detect has have recently been found in the gut, brain, bladder, kidney, spleen, and heart. And there, too, the news has been consistently good.

Chilies and spicy food were once thought to aggravate heartburn and ulcers. But the opposite appears to be the case: capsaicin has been shown to cool heartburn and help suppress the formation of ulcers.

Capsaicin affects the whole body in ways scientists are struggling to understand. Eating a lot of chilies modestly boosts metabolism, burning calories faster and helping in dieting and weight loss. In some studies, it has helped satisfy the appetite quickly, so people eat less. In some experiments, eating chilies reduces blood sugar.

In 2014, scientists at the University of California, Berkeley, got the most remarkable results yet. Capsaicin receptors seem to malfunction as we age, one reason why metabolisms slow down and people put on weight. The Berkeley scientists studied mice genetically-engineered to have no capsaicin receptors at all. The mice had some problems -- they couldn't sense heat, after all -- but they also lived 12 to 15 percent longer than their wild-type counterparts.

Of course, you can't get rid of your capsaicin receptors. Nor would anyone want to. But the scientists speculated that the numbing effect of capsaicin -- which effectively paralyzes the cells involved -- has a similar effect, temporarily shutting down the malfunctioning cells and possibly enhancing metabolism and over health in the process. It's not clear whether a diet heavy in chili peppers can extend the human lifespan, but this study offers tantalizing clues.

Capsaicin's positive effects are modest. But they are real. All of this is to say, the obsession with chili pepper heat may be a fad. Or a form of masochism. But it may also reflect -- for once -- popular taste and nutrition in a happy alliance.

Read more about my book at tastybook.net.