The lives of the founders of the world's religions are fascinating to study -- whether you believe in any particular religion or no religion -- just from the perspective of history alone. A few years ago, I lived in Israel, and remember a powerful realization that struck me as I went on a trip to Rome. The day before my flight, I visited the Sea of Galilee, and saw the very spot where, two millennia earlier, a small group of humble fishermen had heard the immortal words of a Carpenter from nearby Nazareth. Then I took my Alitalia flight, which for some reason that day seemed to go on forever. While looking out the window at the Mediterranean sea, it struck me that one of those fishermen who I had pictured in my minds eye yesterday had crossed this same vast ocean without the help of Alitalia, had been killed in Rome, had affected the lives of billions, and here I was twenty centuries later about to visit his resting place under a magnificent dome designed by Michelangelo.

What were the odds of anything like this happening? My fellow Huffington Post blogger Nassim Nicholas Taleb describes highly improbable events that make a huge impact on human history as "black swan" events that we need to pay attention to. Again, we see a similar series of seemingly improbable events with a massive impact on human history occurring with the rise of Islam -- from the perspective of a statistician, how would you explain that someone who lived in Arabia in the sixth century still has such a profound influence over the lives of a billion of the world's people fourteen centuries later? 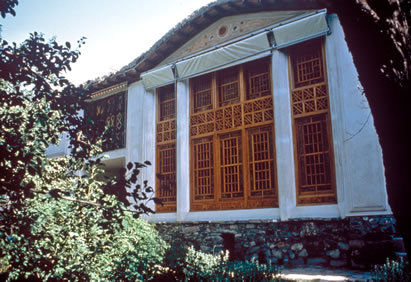 The childhood home of Baha'u'llah, destroyed by the Iranian government in 1981.

On November 12, about five million Baha'is around the world will celebrate the 196th anniversary of another rare event that may have an increasingly large impact on human history. Mirza Husayn Ali, who later took the title "Baha'u'llah", was born on this day in 1817 in Tehran, Persia. Despite a life of imprisonment and serial exile at the hands of Nasridin Shah of Persia and Sultan Abdul Aziz of Ottoman Turkey, His writings number over 100 volumes, are now spread over 200 countries and territories, and have been translated into over 800 languages. I have seen with my own eyes remote villages in Papua New Guinea that have built a special house to hold one of the books He wrote -- a sign of respect in their culture, and something the Shah of Persia could not have believed in his wildest dreams.

The central aim of Baha'u'llah's life and work was to establish the peaceful organization of the entire human race -- something that has not yet successfully occurred in recorded history, but which scientists such as Martin Rees warn must happen in the not too distant future if the human race is to survive. Baha'u'llah summarized the aim of His Mission in an 1890 interview with Edward Granville Browne of Cambridge University:

We desire the good of the world and the happiness of the nations, that the bonds of affection and unity between the sons of men should be strengthened ... what harm is there in this? ... these fruitless strifes, these ruinous wars shall pass away, and the 'Most Great Peace' shall come. 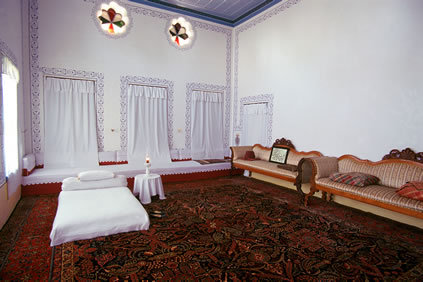 The room where the interview between Baha'u'llah and Professor Browne took place.

The celebration of this particular Baha'i holy day in recent times is sadly ironic as it can be freely observed in hundreds of thousands of localities around the planet except in the very city and country where the event took place. As you read this article, the leadership group of the Iranian Baha'i community is serving their sixth year of a twenty-year prison sentence and over a hundred of their coreligionists, including women with their nursing infants, are also currently behind bars for their beliefs. Iranians are fond of their poetry, and the irony is summed up in the lines of a Persian poet: "I searched the wide world over for my Beloved, while my Beloved was waiting for me in my own home."

If you want to learn more about the life of Baha'u'llah, a good place to start is the website Bahaullah.org. In terms of reading some of Baha'u'llah's writings, a good way to start is with a small collection of passages known as "The Hidden Words." Baha'u'llah describes these short meditations on a variety of subjects as being the "inner essence" of the fundamental teachings of religion "clothed in the garment of brevity." The following words of Queen Marie of Rumania provide a fitting summary:

It is a wondrous message that Bahá'u'lláh and His son `Abdu'l-Bahá have given us. They have not set it up aggressively, knowing that the germ of eternal truth which lies at its core cannot but take root and spread.... If ever the name of Bahá'u'lláh or `Abdu'l-Bahá comes to your attention, do not put their writings from you. Search out their books, and let their glorious, peace-bringing, love-creating words and lessons sink into your hearts as they have into mine.