One of the first words that a new student of Arabic learns is "Bab." It is one of the simplest combinations of the two initial letters of the alphabet, and means "gate" or "door." This easy combination, however, becomes a gateway or a door to countless hours of study needed to master one of the world's richest languages.

My Arabic professor on that first night of class at George Washington University also said this, with a smile on his face: "The word Bab means "gate," "door" or "the co-founder of a world-religion." "That last reference was to a young merchant named Siyyid-Ali Muhammad who was born in the city of Shiraz, Persia (now Iran) on October 20, 1819. In his mid-twenties, he announced that he was the bearer of a new religious message and took the title of "the Bab." One interpretation of his reason for choosing this title is that his teachings would serve as a gate for religion to evolve to an entirely new phase. Another interpretation is that his teachings would serve as a gate to the holy land that is potentially within all of us -- the human heart or soul. 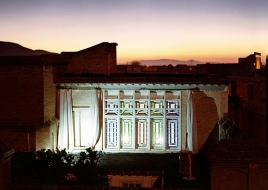 (Image: The House of the Bab in Shiraz, Iran.
It was demolished soon after the 1979 Islamic revolution)

Siyyid-Ali Muhammad rapidly attracted many followers and was subsequently charged with heresy. He was tried before a panel which included the heir to the throne of Persia, Nasridin-Mirza (later known as Nasridin Shah) and was asked: "Whom do you claim to be, and what is the message which you have brought?" His answer was clear: "I am, I am, I am, the promised One! I am the One whose name you have for a thousand years invoked, at whose mention you have risen, whose advent you have longed to witness and the hour of whose Revelation you have prayed God to hasten." He was executed in dramatic circumstances by firing squad soon after, and over twenty thousand of his followers were also massacred.

But just like the phoenix which is regenerated from its ashes, his teachings were carried forward by Baha'u'llah, another prophetic figure whom the Bab had anticipated and have now spread around the world. They are followed by over five million people in 200 countries and territories.

Interestingly, two sites associated with his life show a remarkable contrast in religious tolerance in the modern world. The house where he lived for most of his life in Shiraz was razed to the ground shortly after the Islamic revolution in 1979 -- an example, like the destruction of the Buddhist statues in Bamiyan, Afghanistan, of blind religious fanatics attempting to obliterate holy sites to commit acts of cultural cleansing. The site where his remains are now enshrined, however, is a UNESCO world heritage site of renowned beauty in the city of Haifa, Israel, and has been visited by millions. 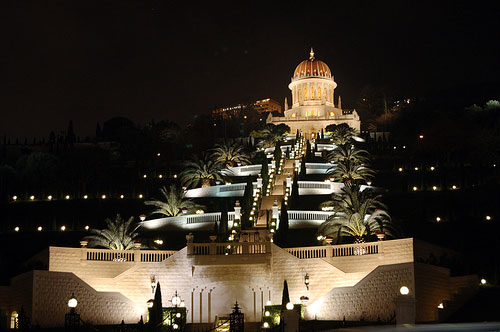 (Image: The Shrine of the Bab in Haifa, Israel)

Just as the combination of the first two Arabic letters can lead to many layers of meaning, the Bab in many of his works showed how some of the most seemingly mundane things can be infused with deep spiritual understanding. He brought an entirely new calendar, where the months and the days of the week are named after attributes of God, thus reminding us that the concept of "time" is sacred. He said that in the future, even the learning of grammar by children in schools will be done in such a way as to teach them of divine mysteries -- that verb, noun and preposition are also symbolic of different stages of divine action. For more on these and other revolutionary spiritual teachings of the Bab, the reader is referred to a groundbreaking new study of his writings entitled Gate of the Heart by Dr. Nader Saedi.

On October 20, 2011 AD, or 5 Ilm (Knowledge) BE 168, millions of Baha'is and their friends in small villages and large metropolises around the world will celebrate the Birth of the Bab. Their thoughts will turn at times to the city of Shiraz, to a beautiful and historic house that remains in photographs and memories. Somewhere in the world on that day, too, some beginning Arabic students will learn how to combine their first letters into a word. And around the world, children will learn about verbs, nouns and prepositions. They will all be entering through a gate to new worlds of understanding.