Has anybody else been scratching their head in amazement at the strange, twisted and alarming chumminess of Obama and Jeff Immelt, CEO of GE?

Or is it only me ... and The Wall Street Journal? 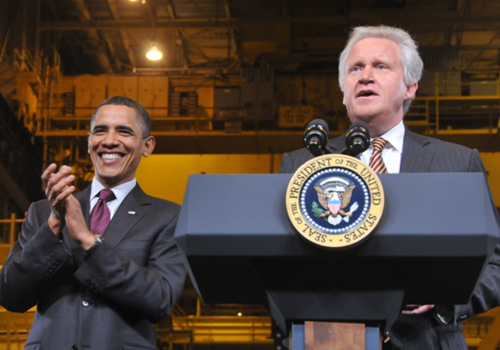 If you're a Liberal, this little friendship makes you angry. And concerned and worried about your Liberal President.

If you're a Conservative, you are left wondering whether -- contrary to all other evidence that Obama is an anti-Business, anti-Capitalist, Marxist -- that he could be playing both sides against the middle with big corporate donors. Could our President be talking out of both sides of his mouth at the same time?

A Liberal feels betrayed because Obama's not supposed to be about Corporatism, government investments of taxpayer money in private companies or Wall Street bailouts.

Conservatives also feel betrayed because Immelt is a Republican who grew up in a rigidly Conservative household where he has said his parents watch five hours of Fox News per day. How does this cozy comradeship even begin?

A Conservative is just plain confused about this weird relationship between arguably the most powerful leader in the world -- Jeff Immelt ... and his "Sancho Panza," Obama. (Just like Panza, our President does strike me as the "everyman" who is "illiterate" and proud of it.)

This relationship between the omnipotent Immelt and our less so President was supposed to be about one thing: jobs. But it seems to have morphed almost imperceptibly into something else; precisely what, I have no clue. But if the Solyndra/Light Squared and "Operation Fast and Furious" scandals that are brewing are any indicator whatsoever, then there's also some smoke to be smelt from this unholy alliance.

Which is it, Mr. President? Who do you really align yourself with: the Occupy Wall Street mob who hate the corporations or your pal, Jeff Immelt and General Electric?