One of the most bizarre, and potentially inflammatory, incidents between the United States and North Korea was the axe murder of two United States Army officers by North Korean soldiers on August 18, 1976, in the Joint Security Area (JSA) located in the Korean Demilitarized Zone (DMZ). The U.S. Army officers had been part of a work party cutting down a poplar tree in the JSA that was blocking the view of United Nations observers.

Within four hours of the attack, Kim Jong-il (son of the North Korean leader Kim Il-sung and later leader himself) addressed the Conference of Non-Aligned Nations and introduced a resolution asking the conference to condemn the U.S. provocation and the calling for the dissolution of the United Nations Command. The resolution passed. 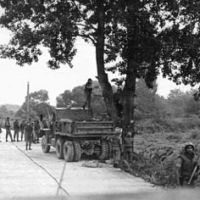 Three days later, the U.S. and South Korea launched Operation Paul Bunyan, to cut down the tree with a show of force (in photo above). These teams were accompanied by two 30-man security platoons from the Joint Security Force, who were armed with pistols and axe handles. North Korea quickly responded with about 150-200 heavily armed troops. The Yokota Air Force Base in Japan was on full alert. The North Koreans quickly disembarked from their buses and began setting up two-man machine gun positions, where they watched in silence as the tree was felled in 42 minutes. Further confrontation was avoided. The 20-foot stump of the tree was deliberately left standing.

This account was compiled from interviews done for ADST with Russel Sveda (Staff Aide to the South Korean Ambassador); Paul Cleveland (Political-Military Officer at Embassy Seoul); and John Kelley (Political Officer in Seoul). Read the entire account on ADST.org. SVEDA: Tom Stern was acting ambassador at the time that the Panmunjom chopping incident occurred. I was his staff aide. It happened just a week before President Ford was to go to the Republican Convention and face off against Governor Ronald Reagan for the nomination. So, President Ford had to look strong. One day in early August, the North Korean guards at Panmunjom, the treaty village that was between North and South Korea, had killed two of our officers. They had hatcheted them to death, axed them to death, for trimming a tree that blocked the view of one of our guard posts from another guard post. They just trimmed some leaves.

The North Koreans took the ax that they were using to trim the tree with and axed them to death. All the soldiers there, just for their own safety, carried cameras so that any incidents would be recorded. There was no way the North Koreans could deny that.

It was really marvelous from my standpoint as a staff aide to see how the American government deals with a major crisis like that. We had a lot of meetings with the commander of the 8th U.S. Army, who was a very fine commander. We knew of all the military plans that existed in case this incident got out of hand.

But I also watched what the State Department could do in a crisis like this. It's never obvious, but what the State Department does and did in this case was to consult with the Soviet Union, with China, with Japan, with the other powers that might be interested in the region -- European powers such as Great Britain -- and find out whether they had backed the North Koreans (the Chinese or the Soviets) and whether they would object to a stern military action.

The Chinese and the Soviets both said they would not, they had no interest in this whatsoever and they really wanted to stay clear and they had no interest whatsoever in anything that the United States would do. So, knowing that our coast was clear, the plan was, on Saturday morning, if approved, to go in and chop down the tree with 200 commandos. If the North Koreans had objected, we had 2,000 more commandos who had been flown in from the Pacific Fleet, and there were a number of bombers that were ready to bomb their harbors. Of course, we had the 40,000 American soldiers who were stationed in Korea on full alert and we also had the millions of South Korean soldiers in full battle mode...

CLEVELAND: I set up a post, so to speak, in [Commander U.S. Forces in Korea, General Richard] Stilwell's outer office. I was concerned from the beginning that Stilwell was taking a very hard line and preparing a retaliatory strike. I remember that photographs of the murdered officers came to the office. I had never seen such brutality in my life.

To the best of my recollection, Stilwell (at right) was preparing to have troops move north toward the DMZ, ready to take action. I was most concerned about Stilwell's mindset more than his actions. From the beginning, I agreed that the North had obviously exceeded acceptable limits, but the U.S. military's posture seemed one of revenge. 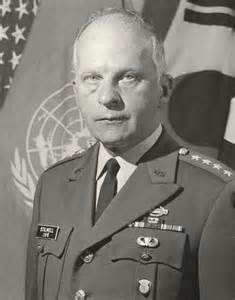 I certainly had no objections to the Command's wish, expressed almost from the beginning, to restart the tree cutting effort. It was clear to me that we had to enforce our rights in the DMZ and that meant going back to the tree and cutting the limbs that were obstructing our view.

I think people have to understand that in this instance the first 24-48 hours were primarily devoted to fact-gathering. The first information received was certainly fragmented and it took the Command some time to nail down the sequence of events. The Command was right in being prepared to take further action if provoked, but I did not think it appropriate for us to do anything more initially then to finish the tree-trimming task.

I have some recollection of Stilwell being quite frustrated by the short-leash that Washington had placed on him. I think that tight control stemmed from Washington's early awareness of the tense situation that had developed on the Korean Peninsula.

I could not know who had actually ordered the attack on the American military contingent that was sent to trim the tree. The question of whether it was just a sergeant or whether it came from higher up is still unknown today, but I had no doubt that the attack was planned before the event ever took place. The North Korean troops had been brought to the site in a truck, who at someone's command jumped out and set upon the American contingent with axe handles. It was obviously a calculated move.

In any case, the North Korean action was a serious breach of the Armistice Agreement. The provision of that Agreement clearly gave us the authority to trim or remove any obstruction of our view of all areas within Panmunjom, "the Peace Village." The tree had grown and spread so that our observers could not view the "Bridge of No-Return" and the guard boxes that were placed at the bridge. Our military had notified the North Koreans ahead of time of our intentions and the reasons for our action. There may have been some objections from the North -- I believe that the tree all of a sudden became "holy" and therefore untouchable, but we were well within our legal rights to trim the tree.

KELLEY: [The Ambassador] heard about what the South Koreans would want to do by way of reaction; they were incensed, of course, and didn't want to have their noses rubbed in this incident by the North Koreans. We understood that our reaction had to be controlled but had to be seen by the American and South Korean forces as tough and appropriate to the circumstances.

We took tremendous precautions to make sure that the North Korean reaction, both the immediate reaction and the ultimate reaction, could be contained. We put U.S. and South Korean forces on a very high level of alert, as soon as this incident happened. We kept them on alert throughout our responses.

We neutralized all of the North Korean check points (which we considered to be illegal check points that had been installed by the North Koreans within the zone, where they could drop barriers and stop our movement within the jointly controlled zone) so that they couldn't react. The plan was to go in and to saw off all of those barriers, to remove them physically, and at the same time to chop this tree down to a nub. [Note: The tree, at left, was left standing and finally replaced by a monument in 1987.) The tree had become a symbol and so the idea was not to leave any part of it standing, not to just trim it, which had been our original objective. 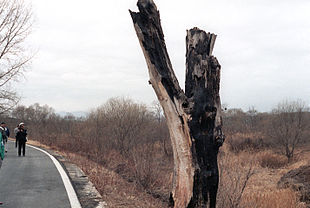 At the same time we made sure we had a sufficiently powerful force to block any North Korean move to interfere with this action. We had air forces prepared to intervene if necessary. We moved in and took up blocking positions to block the bridge that the North Koreans had come across the first time when the incident took place.

SVEDA: My role in that as staff aide was to do briefing books. I was up for 48 or 72 hours straight. When I was finally finishing, which must have been about 2:00 a.m., I got a message from the communicator that was "eyes only" for the acting ambassador. I could either call in Tom Stern or I could go with an armed guard to his residence to deliver the envelope to him. I called Tom and he said, "Oh, don't bother with the armed guard. I'll come in."

He comes in and I hand him the envelope. I simply asked, "is it an order to go to war?"

So, that morning, I woke up late. I knew that the action was to begin at dawn. It was 11:00 am and I was very, very happy that I didn't hear firing in the distance or anything....

CLEVELAND: The whole incident was concluded essentially by us finishing the tree trimming. Tensions cooled after we had taken action, although we were prepared for the worst when our troops went back in with their shears and saws.