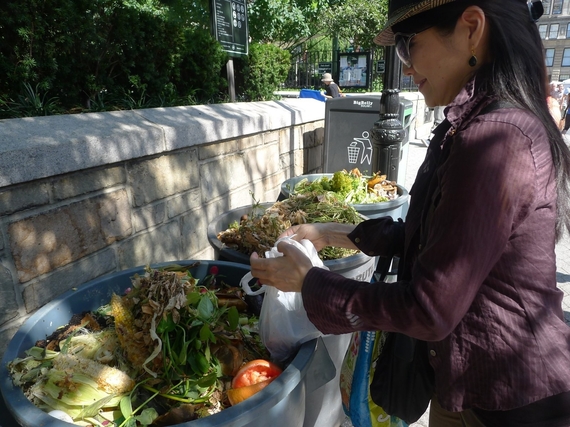 The subject of food waste has never been more popular, generating vigorous discussions about the amount of edible food that ends in the trash. The emergence of enlightened practices including recipes for commonly discarded remnants, embracing visually imperfect produce, rescue for food pantry distribution and altering our buying habits, all combine to reduce the amount of food that ends up in the waste stream. Regardless of our efficiencies, there is invariably food waste. And so my fascination with garbage, the next stop in the food chain.

How we create and think about our trash - like food waste - has evolved with the growth of our consumer economy, going from the once upon a time thoughtful creation of limited trash to the explosion of the disposable culture. We are masters at creating garbage and were it not for the shrinking availability of landfills, the cost of handling garbage and the sheer value of well-crafted compost, many of us would rather discard and dismiss. Composting, on the other hand, can be quite virtuous - a thoughtful, concrete and proactive act that has an immediate impact and positive outcome.

Composting by consumers is a fascinating activity. Food waste is about 17% of our residential trash (and 31% overall is organic and suited for broader composting) according to the DSNY. Home food waste can be over 50% of the trash if, like me, you cook from scratch several times a week. Some cities, notably San Francisco, Seattle, San Antonio, Portland, Boulder and Cambridge have implemented mandatory composting programs. In 2013, the NYC City Council passed Local Law 77, which mandated a voluntary pilot program for residential organic waste curbside collection. This program has provided compost bins to 100,000+ households in Brooklyn, Staten Island, Bronx and Queens. There have been very limited trials in Manhattan high-rise buildings. Additionally, several hundred city schools are engaged in food waste composting as a result of this mandate.

So what exactly is compost? It starts with our organic garbage and the eventual end product is compost, or decomposed organic matter that can be used to enrich and fertilize the soil. Think of it as black gold. [Also, remember that the cost of converting organic matter (trash) to compost is much cheaper than conventional processing and has an excellent environmental impact.]

Some composting basics; it requires 4 simple inputs:
Nitrogen - the 'green' component, from food scraps and manure (though urban programs do NOT accept manure).
Carbon - the 'brown' component, from paper, cardboard, wood chips, dried leaves.
Air - piles are turned or mixed by us or by worms in the soil so air circulates around the mixture.
Water - moisture is critical.

These ingredients in proper proportion create an environment where bacteria and fungi break down the food, converting it into nutrient-rich, dark humos. This happens over a period of several weeks to months depending on how often the compost pile is managed. During this time, the activity in the compost pile generates heat up to 150 degrees - hot stuff!

So let's say you are not in the pilot program and really want to start compost anyhow. What next?

A dedicated citizen can find compost sites at dozens of locations throughout the city. Pioneers include the Lower East Side Ecology Center who have been collecting food scraps in the Union Square Market and at their headquarters since 1990, and GrowNYC, which has bins at 40 of their Greenmarkets citywide in partnership with other local organizations. The NYC Compost Project (which the city oversees) partners with the city's botanical gardens and three non-profit organizations. BuildIt Green!NYC operates sites in Queens and Brooklyn and piloted the first Commuter Composting drop-off sites. (Sort of take your trash to work, but at the subway station, there's a compost bin!) Earth Matter maintains a site on Governors Island providing education for youth and interested NY'ers as well as training for those interested in becoming compost leaders.

I spent Saturday morning staked out at the LESEC's compost bins in the Union Square Greenmarket. Like you, I assumed that saving food scraps in a NYC apartment was not a savory, albeit cool, thing to do. I hoped to ask about what home containers were recommended (even Williams-Sonoma has a fashionable compost bin) and about the storage strategy at home. I was astonished by what I saw.

This is a dedicated group with a clear sense that they are doing meaningful with impact. One doesn't save food garbage in a NYC apartment on a whim. The demographic of the composter was evenly split male-female and probably skewed to 30-40 year olds, though it truly ran the gamut of ages. Parents with kids in strollers, and couples along with singles made the drop with panache, not a wipe or hand sanitizer in sight. I couldn't predict who would be making their way over to the bins (many had shopping carts with bags hidden from view). Almost everyone I spoke with was composting for at least 2 years and some as long as 20. And of the dozens of people I spoke to, nobody complained about a smell - the trash "doesn't stink if you have good habits," I was told.

For many, the connection to the Greenmarket, an appreciation of fresh food, the awareness of the connection between composting, farm produce, healthy planet and social responsibility is fundamental. Many spoke of a heightened awareness of wasteful consumption. Vicky, originally from Houston but in NYC since '02, composts a few times a week. It's a short walk from home, she is able to shop the market and feels "freed up" to buy more flowers knowing they won't end up in a landfill. It's relearning the basics she says, of what we all once knew.

I asked several people where they store the scraps and the answer was unanimous - the fridge or freezer (no fancy buckets required!) Most used some form of plastic bag (which get their own dedicated recycling bin).

Tom shared with me what happens at his home; he's the family cook and if his wife puts food in the garbage, he takes it out. While walking his daughter to school, they compost multiple times a week, each deposit is 3-4 lb. of scraps.

Seth, originally from Minnesota (where composting was part of life) discovered how easy it is and sees how great the compost is for his potted plants. Impacting social change is rewarding for him and his roommate.

I asked people about the space commitment and everyone seemed to have lots of room in their fridge or freezer. When I looked surprise, one man challenged me - after all, what fresh food eating person would have a full freezer? I had to take a quick mental inventory: Nothing Sinister. A lot of frozen pesto (preserving the harvest), frozen veggie stock (the by-product of root to tip cooking), frozen overripe bananas (rescue for eventual banana bread) and vodka. I got home and did a complete assessment of its content, discovering several items which graduated to the compost bag. I now have freezer space.

In the Great Performances' kitchen, we have diverted over 120 tons of food scraps from landfills last year. At Katchkie Farm, composting is a way of life. At home, I never thought of composting, that is, until now. As I cooked on Saturday night, I put the food trash in a plastic bag. Before I knew it, it was stuffed with scraps and my garbage can was almost empty. The next day, I stepped up to the yellow bin at the Columbus Avenue Greenmarket and made my deposit. It felt like being part of the in-crowd. Will it stick? I am not sure. My last ethical food challenge seven years ago (no meat) altered my eating habits to this day. Composting in a NYC apartment is a powerful act. I can see the obvious connection between shopping and composting - how logical. I am intrigued but on the fence.

In case you want to get started: