It was a sign of the times for Black life in the '60s. Police brutality. Poor housing. Few job opportunities. Little chance for higher education. The response to the oppression in The South was demonstrations, sit-ins and peaceful civil disobedience. The response that bubbled to the surface in Oakland California was sheer anger and defiance. As Stokely Carmichael put it, "You tell all the white people in Mississippi that the scared "N-Words" are all dead." And so the evolution of the Black Panther Party began. 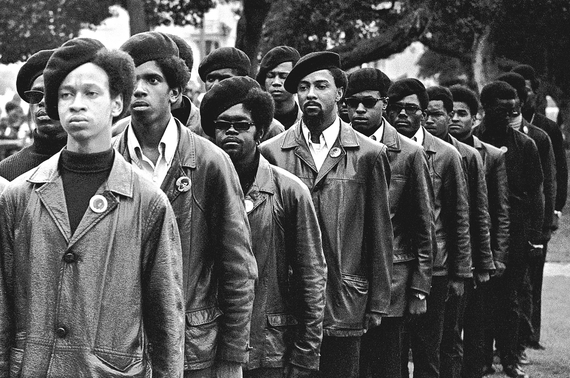 Spreading from northern California to metropolitan areas across the nation, a movement was born. Something in the swagger of the Panthers, the high-self esteem, intelligence and physical appearance (berets, leather jackets and sunglasses) attracted young disenfranchised African Americans. It's taken 40+ years for the story of their grassroots social revolution to be told in a feature-length documentary. At the helm is veteran non-fiction filmmaker Stanley Nelson (Jonestown: The Life and Death of Peoples Temple). He and his crew are well up to the task of sharing this bit of history.

Jamal Joseph, former Black Panther, sets the stage: "You didn't walk down the street with the same sense of safety as a white person. Police beat you up and put a gun at your head on a daily basis." Elaine Brown, an ex female Panther, concurs: "We couldn't unsee what we saw." Party founder Huey Newton explains the use of the panther as a symbol: "We used the Black Panther as our symbol because the nature of a panther doesn't strike anyone. When he's assailed, he'll back up first. But if the aggressor continues, he will strike out."

The difference between the Oakland crusaders for racial equality and their counterparts in the South was sheer audacity. These men/women openly carried guns. In fact they went en mass to Sacramento to stop a law that would forbid people to carry weapons. That show of force garnered media attention and put the Panthers on everyone's radar. It also marked the beginning of them using the media to their best advantage as they sought to break down a capitalist system, which in their eyes harbored racial and economic inequality.

Ex-panthers, like Kathleen Cleaver, who are now senior citizens, narrate the proceedings adding background and personal anecdotes to visions of iconic Panthers like Newton (the visionary), Bobby Seale (the personality) and Eldridge Cleaver (the intellectual). The trio went through a metamorphosis, camaraderie to mistrust, rivals to enemies.

A barrage of interviews with police, FBI informants, journalists, historians, Latino and white supporters and plenty of detractors gives a full perspective on how the party, it's leaders, members and goals where perceived. Archival footage, TV appearances, photos, newspaper headlines, terse discussions, inspiring or inflammatory speeches from podiums at huge demonstrations... few stones are left unturned. In 1h 53m, what parades before your eyes is an historical montage that starts out like an old-school educational documentary, then adds on layers of facts, figures, recollections and shocking revelations that make you question how anyone lived through those times without being politically or socially involved.

The most eerie and unsettling subplot is the insidious, evil and dastardly machinations of the FBI, under the direction of J. Edgar Hoover. Encouraging local police to assassinate Panther members, planting informants in the party whose duplicity led to murders, sending letters implying infidelities to spouses of party members, manipulating the relationships between Newton and Cleaver so they were at each other's throats. There was little they would not do to thwart any gains towards racial equality, which they saw as a threat to the government. If only half of the FBI dealings in this film are true, it makes you rethink the assassinations of Malcolm, JFK, RFK and MLK. Hoover's program "Counterintelligence Program Black Nationalist-Hate Groups" was right from the devil's playbook.

Several key moments standout: 1.) Panther members starting a breakfast program for kids, meals for the poor and free health clinics. 2.) Little Bobby Hutton following Cleaver's misguided call for an armed war on cops after MLK's death, and meeting his own. 3.) 21 NYC Panthers are charged with terrorist activities and jailed for years. 4.) Fred Hampton, Deputy Chairman of Illinois Black Panther Party, gives a profound speech in Chicago with the verve of a born leader, "You can jail revolutionaries, but you can't jail a revolution." 5.) Liaisons with the Latino group the Young Lords and the Young Patriots, white boys from Appalachia, are noted.

Whittling down what must have been countless hours of possibilities into a coherent film was done by director/producer/writer Stanley Nelson and editor Algernon Tunsil. The pacing starts off slow, and seems to build as the dramatic moments of the Panther's existence materialize. Then, like a decades old drama, that energy splinters and flickers out. The music (Tom Phillips) and sound (JT Takagi) are perfect effects.

There are plenty of incidences of the Panther's being under attack, none on view of the Panthers attacking. Surely a loosely organized national group like this, who didn't vet members, some of whom had prison records, made more mistakes than are accounted for in this film. There is only a brief bit about the sexist dynamics between the women and men that drove some female members out of the group. This aspect needed more explanation. There is no mention of Panther member George Jackson, who was shot to death in San Quentin Prison during an attempted escape. Cleaver's arrest for rape is not divulged. Bobby Seale, who is still alive, is not interviewed. Why? Sometimes you don't feel like you're getting a "warts and all" accounting.

Stick with this movie. It has a lot to say, a lot to reveal and is pertinent to today's testy police/civilian race relations. For four decades, possibly in a very imperfect way, some determined people sought to change the course of American history. Some lofty goals, such as dismantling capitalism, were not achieved. Some ideals, are now part of the fabric of the country, like breakfast programs for inner city kids.