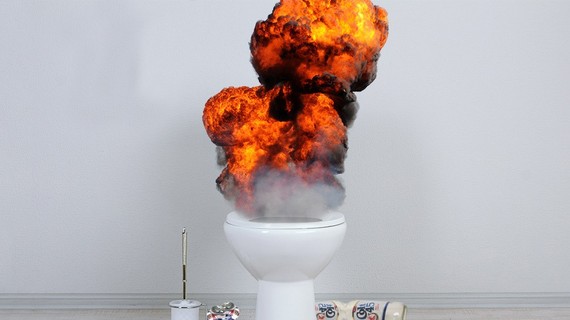 The variance and veracity of man's bowel movements after a night of drinking has been a problem that's plagued our species since the dawn of Saturday mornings. Right up there with life's most pressing questions -- Are we alone in this universe? Is there long-term, tangible meaning to all this bullshit? -- lies the question Does my butthole sting because a big poop physically ripped it open or is it so toxic that it's merely an acidic burn? Well, wonder no longer, dear readers, for The Black Sheep dares to take you on an adventure to identify the type and cause of 7 different types of DADS.

All morning your butthole has felt pressure building behind it, not unlike holding your thumb over the end of an angry hose. When If you finally reach the bathroom in time, the result is what the male species can only assume what peeing out of a vagina feels like. Only, you know, out your butt.

Cause: You drank a lot, and fast... also you probably forgot to eat dinner. Whoops! This fire hose of shit will come late the night-of or early the next morning, as your body is reacting quick and aggressively to flush everything out. 2 Steel Reserve 40s - food - body's ability to absorb water + your intestines pulling liquid to flush the influx of toxins = liquid fire.

Also known as the "Wine Cork," the Dirtstar Supernova turns your butthole into an old civil war cannon, backed up with years of black powder, sediment, and dust in the basement of Fort Dumpter. Suddenly the cannonball comes blasting out surrounded by all that loose sediment, the fort walls are covered in black debris, the cannon itself is a blown apart... this metaphor's getting old. Your toilet's covered in shit. You've got a real mess on your hands.

Cause: The ethanol in alcohol revs up the intestines to push everything through quickly, leaving less time for colon to absorb water, which means watery stool. Plus, you must've had one already loaded in the chamber. As your body freaks out and floods the bowels, pressure builds behind that nicely-digested poop like a shaken up champaign bottle. Whatever you're doing, you better find a bathroom fast, before your dirstar supernovas inside your pants.

First, stick your tongue out, close your lips and make the snake tongue motion while pretending to blow out candles. Then imagine someone browned a pound of hamburger, dumped it in a gallon jug of water, shook it up, then sporadically forced 20-30oz of the watery chunk mix out of a turkey baster 10-250 times a day. In this scenario, the turkey baster is your tight lil' buttonhole.

Cause: At least you've got some solids now, but they're disjointed and flooded. Unless you've been snacking on granola all night, the lack of fermented fiber in your bowels means you lack the "glue" that binds chunks of poo together, resulting in Ground Beefs. One can only imagine the year ~24AD, a young Jesus Christ, made human by the Lord God in His own image, crept into Judas' tent after all that wine at the Marriage in Cana, carved out a little hole in the sand, bent over, and blasted some steamy Ground Beefs for a good twenty minutes while everyone else slept. Why he wouldn't plea his father to do away with hangovers right then and there? We'll never know, the Lord works in mysterious ways, and so we march onward.

Perhaps the most common type of DADS, the hot snakes are long, brown tubes that flitter out your butthole and coil around the toilet bowl with the fury of a thousand suns. Like your high school girlfriend, they're thin 'n windy.

Remember being a kid on the beach, making drip castles out of wet sand? This is the same thing, only instead of a beach you're in a moist Subway bathroom, and instead of sand dripping out of your hand into a neat little castle, this is a warm, continuous stream of dry, grainy shit being pushed out your whimpering butthole.

Cause: Coupled with all the red wine you drank last night (sugary drinks containing fructose are hard to absorb, and result in soft serve), you've waited a long time to poop -- maybe because you held it in while Brad took you to brunch. Brad, he's so sweet~! So while Brad was blabbering on about his high school lacrosse bros, your large intestine was dehydrating and reabsorbing all that toxins in your wine poo. The plus side is the girls won't hear you splatter the toilet with Ground Beefs, negative side is this shit don't clean up real good...

Dark Matter is the most dense, and therefore heaviest, substance in the universe. Much like your soul as you crushed a second Jimmy John's sandwich at 3 a.m. it's black, thick, and dead inside. It sinks to the bottom of the bowl, prepped to pull the city's plumbing system, then the universe, into a bottomless black hole of despair.

Cause: You probably haven't pooped all day, and that's not good. The large intestine continues to absorb and recycle the shit in your poop, so the longer you've held onto this toxic poop, the worse you've felt. This leads to a very dense, very dark piece o' poop in the bottom of your toilet bowl. That, or you're a very healthy drunk eater and you just laid a high density, low-fat poo. But we're going to gamble and go with the prior.

Named after a dear friend of The Black Sheep, the Joe 'Splosion is when you go into the bathroom to alleviate your DADS, but end up doing double duty. You sit on the porcelain throne waiting to evacuate last night's demons but nausea quickly demands your attention. The walls start to close in, and you opt to hop off the seat, unwiped, to press your temples against the cold tile floor and pray for death. But death doesn't come, and now bile is spilling out both ends like a porcelain cherub spewing water in a pervert's fountain.

Cause: You just straight up went too hard last night, man, and now either nausea or the smell of your DADS are sending your body into a last ditch, all-out detox. You fucked up.

Once that third shot of strawberry Burnett's travels down your esophagus, the absorption of alcohol begins in the stomach, where it starts to poison the cells and tissues of your digestive system.

As the booze continues to the small intestine, the intestinal cells absorb the bulk of the alcohol. The toxicity causes these cells to lose their ability to absorb water (not good for not having diarrhea), and some cells even die! THEY'RE DEAD!

Meanwhile, the enzymes your body normally releases to break down carbs in the small intestine FREAK OUT when it can't handle the amount of carbs contained in 13 Bud Light Limes, and sort of just say "fuck it" and let all those carbs into the large intestine undigested.

The cell injury and death leads to an outpouring of fluid from the intestinal lining, which is in turn poorly absorbed. Poorly absorbed liquid in the intestines? You probably smell what's coming next.

Somewhere in this process you're shoving a shitload of grease and Jimmy John's down your gullet in which your already-poisoned, hobbling large intestine is still trying to ferment all those carbs. It's about here you'll start farting. A lot.

Your brain finally notices your body is being poisoned, and, literally, opens the floodgates to flush that poison out. The end result is large volume secretory diarrhea, the worst stripper name of all time.

Your body continues to flush the bowels until the alcohol is detoxified and removed from the digestive system. So, the more you drank, the longer you can count on shitting yourself. The good news is, your body is well under way of detoxing itself by your second bout of D.A.D.S.