In 1913, railroad tycoon and tourism entrepreneur Louis W. Hill brought a group of 10 members of the Blackfoot Confederacy to New York City from their reservation on the border of Glacier National Park in Montana.

Hill was the founder of the Great Northern Railway, the northernmost transcontinental railroad and the only railroad to be privately funded rather than built with government land grants. He saw enormous tourism potential in the pristine landscapes of the Pacific Northwest and lobbied for the establishment of Glacier National Park, a place to which his railroads would deliver tourists.

Hill believed that the Blackfoot people living on the Indian reservation bordering the park would be an additional draw. He arranged to bring 10 members of the Blackfoot nation to New York City to be part of "the scenery" at the Glacier National Park exhibit at the Travel and Vacation Show, held at the Grand Central Palace in 1913. Naturally, they traveled to the east coast in a special car on the Great Northern Railway. The Indians inhabited the exhibition area from March 20 through March 29 and were visited by more than 10,000 people a day.

The New York Times reported on March 19, 1913: "Visiting Blackfeet Pitch Tepees on Top of the McAlpin." The Hotel McAlpin, located on Herald Square in what is now a condominium building called Herald Towers, had opened just months previously and at the time was the largest hotel in the world. The Times indicated that the Indians rejected "several suites of choice rooms" in favor of setting up their tepees on the roof. Many hotel guests traveled the 25 stories to the roof to see the Indians, who apparently received them cordially.

The Indians also took in the sites of New York City and the Spokane Spokesman Review reported that they performed a traditional dance for crowds outside the Great Northern Railway offices.

The Blackfoot Confederacy is made up of four tribes; the one from Montana is properly called the Siksika Nation. Siksika translates from a dialect of the Algonquin language literally into "blackfoot." The name is thought to originate from the black dye this tribe used on the bottoms of their moccasins.

The United States government had long tried to assimilate Native American people into European culture. Indian boarding schools were established that took Native American children away from their families and tribes and forbid them to wear their traditional clothes or speak their native languages. In the context of tourism, however, those very traits the government attempted to erase were seen as valuable assets.

Two Guns White Calf, pictured below, was the disputed model for the profile on the Indian Head Nickel. The artist denied it, but the Great Northern Railway promoted the notion in its advertising pitches for Glacier National Park.

Two Guns White Calf's father, White Calf, made the treaty by which the land for Glacier National Park was ceded to the United States. Two Guns White Calf was subsequently hired by the Great Northern Railway to travel the country and advertise the thrills of the untamed West.

Chief Three Bears, also pictured below, at 80 years old the tribe's eldest member, offered prayers upon first seeing New York City's skyline. Various sources reported different accounts: one that he likened the skyscrapers to the mountains in Montana, and another that he thought the buildings were monuments to dead warriors.

The Byron Company captured a wide assortment of New York City scenes from the late 19th century through the early 1940s, including theatrical productions, society events and street scenes. They documented the Blackfoot Indians' visit to the city with posed scenes and formal portraits.

The Museum of the City of New York is in the process of digitizing its photographic and other iconographic holdings. There are more than 60,000 historic photographs of New York City, including more than 24,000 by the Byron Company, online in the Museum's Collections Portal.

Many thanks to Ray Djuff, who is writing a biography of Two Guns White Calf, for getting in touch with the following clarifications and corrections:

· The trip was the inspiration of Louis Hill, then head of the Great Northern. It was Louis's father, James J. Hill, who founded the railway. The son, Louis, took it over as president in 1907, later becoming chairman.

· Pitching their teepees on the roof was a publicity stunt, planned in advance. The members of the tribe stayed in their rooms, but received the public and the press on the roof as a novelty.

· Blackfeet are part of the Blackfoot Confederacy. The Montana tribe was then and is now called "Blackfeet." The Canadian tribes are the Piikani, earlier referred to as the Peigan or North Peigan; the Blood or Kainai; and the Blackfoot, now called Siksika. None of these names are what the members call themselves. They call themselves Nitsitapi, or the Real People.

· Two Guns' father, White Calf, as well as Two Guns and his brothers, signed the treaty that handed over the land for what is now the eastern part of Glacier National Park in Montana.

· According to census records Three Bears was about 60 years old in 1913. He was not the oldest member of the tribe at the time as some newspapers claimed.

PHOTO GALLERY
The Blackfoot Indians in New York City
Download
Calling all HuffPost superfans!
Sign up for membership to become a founding member and help shape HuffPost's next chapter
Join HuffPost
Voting Made Easy
Register to vote and apply for an absentee ballot today
Register now 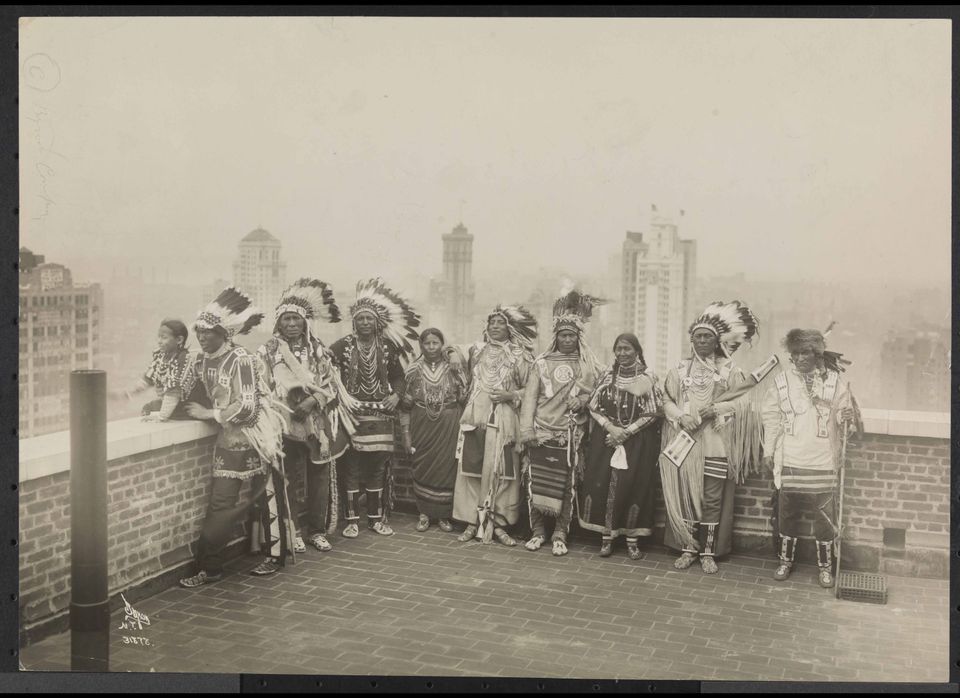 1 / 15
<a href="http://collections.mcny.org/mcny/C.aspx?VP3=LoginRegistration_VPage&L=True&R=False#/ViewBox_VPage&VBID=24UP1OQFR9EZ&IT=ZoomImageTemplate01_VForm&IID=2F3XC582GTOB&PN=1&CT=Lightbox" target="_hplink">Indians, 1913, Byron Company, from the Collections of the Museum of the City of New York</a>