Urban farming changes everything we know about food. To borrow Michael Pollan's phrase, this is the omnivore's next dilemma. Is there a natural cuisine of the city that can be romanticised in the way that the cuisines of Italian villages, for example, have been? If I were still living in California I'd want to be a reporter covering the urban farming beat for the city desk. Talking to venture capitalists about the farming systems they're funding, and chefs and markets about who decides what gets grown and who owns the food if a farm is a set of boxes in what used to be a parking lot in a corporate building, and if there should be animals farmed as well as fruits and vegetables, and how this will be regulated. 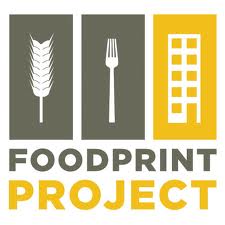 Nicola Twilley and Sarah Rich are already on this beat, using food systems as a way to study the city with their Foodprint Project, a public seminar that was held in New York in February, Toronto in July and will be staged next in Los Angeles in January of 2011. It's a "collaborative exploration of food systems. Our goal is to bring together people with diverse backgrounds and expertise to start a conversation about using food as a design tool to make our cities more resilient, sustainable and healthy." On Urban Omnibus, Nicola Twilley posts about the insights she's gained from the first two Foodprint events:

"Many extraordinary and peculiar factoids certainly: enough to keep us well-stocked at dinner parties for years to come. Toronto, for example, is the second largest urban food processing hub in North America (after Chicago) and its food factories still occasionally overwhelm certain neighbourhoods with the smell of roasting coffee beans, freshly-slaughtered beef, or potato and leek soup. We also learned that turning just 10% of NYC's private backyards over to urban agriculture would produce 113 million lbs of vegetables each year, or enough to feed 700,000 people at current rates of consumption.

We have also confirmed one of the Foodprint Project's founding premises: the best food conversations are hyper-disciplinary. As Nevin Cohen, urban planner and panelist at Foodprint NYC, put it, "Food is a social justice issue and a public health issue: it's also an economic development issue, it's a transportation issue, it's a regional planning issue, it's an ecological issue."

With the "Landscapes of Quarantine studio" and exhibition, and the Postopolis event in Mexico City, which included studies of the city's food system, staged through the Storefront for Art and Architecture, and on her blog, Edible Geography, Nicola Twilley documents food systems and creates speculative food scenarios that are mapped onto the city. She was part of a nine-blog online conversation connected to a "Glacier / Island / Storm" architecture studio at Columbia University in February. She wrote about how bartenders re-create "the forms of ice listed in historic recipes: block, chunk, cracked or snow" rather than blocks made by standard ice-machines. She spun out a scenario, based around a "grow your own glacier" article in New Scientist, for bartenders to take ice to the next level by growing their own customised glaciers:

"While traditional techniques call for pebbles and sawdust to be embedded into a glacier's starter matrix, today's cocktailing elite could substitute orchid flowers, raspberries, or espresso beans to create flavour accented glaciers - and then invite guests to watch them hand hew berry-studded chunks, the perfect finishing touch for a Brownie Cognac or Irish coffee. The theatrical potential of custom artificial glaciers might be second only to the champagne fountain."

No program has been announced yet for the Foodprint Los Angeles event but with the way that Ridley Scott's movie Blade Runner has had a profound effect on architects, artists, designers and planners, it's possible that this event might include speculative urban food futures that are so strange they need to be evaluated using the tools of science fiction. There was an article in The Guardian this week that suggests that growing meat in vats may be the only option if the nine billion people who are expected to be alive by mid century are to be fed. This is seems to be a scenario from the beginning of Blade Runner. 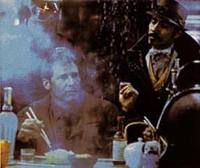 Throughout the movie we're shown that the city services have almost completely broken down, the infrastructure is barely functioning, with uneven power distribution and seemingly no garbage collection services. Animals are organic animatronic creatures and we're shown vats growing body parts and creatures from DNA. It always makes me think that all of the food is likely to have been grown in vats as well, that when Deckard sits down at the noodle bar, what he's eating is vat grown meat protein and some kind of vegetable synthesis that probably has a neural trigger mechanism in place of real flavour, that triggers some kind of residual memory of flavour. If we're heading into a world where the Blade Runner noodle bar is a reality, it brings up a new set of questions: is vat grown meat ever technically alive? What are the ethics of dealing with it? What happens to the cultures that have religious rituals and taboos tied to meat? Do we generate meat based on known creatures or properties? The same questions apply to vegetables too: will we end up with genetically modified produce laced with vitamins and vaccines that are unrecognisable from today's fruit and vegetables? And what do we cook with them? We'll need new recipes and techniques. I imagine that among the photographs that document invented memories that the replicants carry around there's a deeply strange cookbook.