"We have a line!" Chloe, my middle child, calls in a voice that fills the space between earth and sky.

"You do!" I answer, side-glancing at my husband, not even trying to hide my smile.

"Get to work," he suggests, tipping his chin in the way that he does in his sincerest of moments. 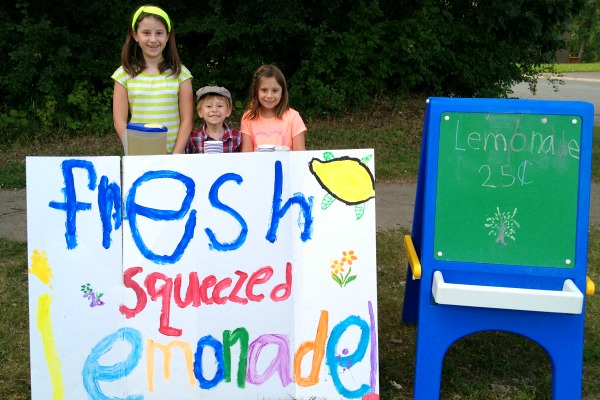 We sit in chairs designed to watch soccer and baseball and fireworks and take them in. They stand in birth order, the sun glinting against their hair. It glitters in shades of chocolate, honey, and almond. A delicious staircase.

One tilts her head to the side when she talks in a way that is so like my husband, another digs through coins, biting her lip as she figures out change, and the third is talking, chatting, and charming their "customers."

I bite back the urge to dole out reminders. Pour carefully. Say thank you. Offer change.

It's 6:00-ish. Dinner time. Just getting home time. Errand time. Sports time. But our kids are having a lemonade stand. And they're rocking it.

Moments before, our family sat and stood and jumped (only some of us jumped) on the corner of the usually busy street. Grass beneath our feet, evening sunlight kissed by a breeze, summer's gift to Minnesotans, warm against our skin. Our table, our sign, our lemonade ready.

A running group went by, their highlighter colored shirts polka-dotting their path. A young boy walked a large dog, I wondered who was actually walking who. And cars sped by, one after the other. My kids stood, thankfully still-small fingers spread against the edge of the card table. From my space behind them, I watched their heads follow each passerby. They moved in unison from left to right, over and over and over again.

And it was quiet.

My heart sank. I wanted to physically make these people stop. Give them money? Call our friends? Stand closer by my kids' side and give all those people The Look in the way that only mothers can get away with? I gave my husband a version of The Look, willing him to fix this.

He shrugged, sat back, and waited. He's always been better at waiting than I am.

Our new-ish neighbors stepped out of their house, pushing a stroller. Their little guy sitting up straight in his ride, ready for a ritual that looked and seemed and felt so familiar, that I immediately remembered doing the same. His eyes squinting into the sunlight, toddler knees bending, fingers curling.

His dad stopped, pulled out his wallet, and asked for a cup of lemonade. Our kids' eyes lit and their cheeks raised instantly.

Kayli poured, Chloe sliced a strawberry halfway and placed it on the side of the purple cup. Both were meticulous and resisted the urge to lick the juice drizzling down their wrists. And Brody kept on jumping.

And that's how we went from a (slight, but still) panic, to a line at the lemonade stand.

This new father who suddenly understood how important lemonade stands could be.

A teenage girl who took three crumpled bills out of a beaded purse and handed one to each of my children.

A tanned, tattooed 20-something who asked, "What are you going to do with all of this money?"

A grandmother who motioned for my kids to come to her car with knotted fingers and told us that 25-cents was an acceptable price, although in her day, two cents was the going rate. I loved her instantly.

A business man still in a suit. A young couple. A family of three.

My friend's son who bought a cup with his own money, speedily scootered home -- lemonade in hand -- then scootered all the way back just to tell us how good the lemonade was.

At a lull, I took in my family again. Three out of five were now jumping. And as cars went by, they were smiling and waving, which warmed my heart over -- twice. And when I took the time to look, what I saw is people waving and smiling at us, even after they passed.

A young mother slowed, but didn't stop. Our kids waved, arms stretched to the sky, fingers splayed against clouds. She point our way, eyes half on the road and half in the rearview mirror, explaining what we were doing to the little ones in the back seat. They smiled and waved, too.

Three boys on skateboards went by in long shorts and black tank tops. Hats backwards, sunglasses on, headphones resting on shoulders. Their lean bodies moving this way and that. One waved, the next gave my kids a thumbs up, and the third called, "Good job!"

Kayli looked back and smiled just as big at the people going by as she did when their first customer arrived. "This is fun," she announced. And she was right. This, all of this, is the best kind of fun.

Right before we closed our stand, a dusty truck pulled over. It was loud and rumbled in a way that made me cringe for the babies on our street that might already be sleeping.

A guy about my age stepped out of the truck. He was wearing tall, muddy work boots tightly laced up his calves, khaki shorts, and a matching muscle shirt tinged with sweat. A five o'clock shadow grazed his sunburned cheeks and his mud covered fingers were wrapped around a big plastic cup.

As he walked up, Brody called, "Do you want some lemonade?"

He nodded, then quietly helped my three kids measure how many of their small, crayon colored cups it would take to fill his large plastic one.

"I always make it a point to stop at these," he said to my husband and I.

"So do I," we both answered, immediately seeing that sometimes people are more the same than it seems at first blush.

When he drove away, he waved and honked his horn three times. I think it was one honk for each of my kids, which is exactly what I would have done.

So what I learned at 6:00-ish o'clock on a cool August evening is this: The blessings of a lemonade stand are twofold.

The first, is the light that you give. It turns out that toothy smiles and big waves and 25-cent lemonade are the brightest of summer gifts.

And the second, is that when you're sitting still on a busy night and choosing to look, you see the all the light coming your way, too. 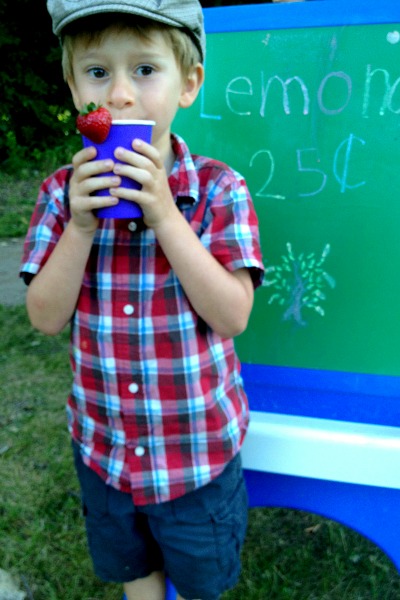