The French are up in arms again. Contrary to what one might think, it is not about internal social inequalities and the immigration challenge France faces nor is it about the dangers of terror in Europe, only recently warned against by the United States. Nope. It is peace in the Middle East. "The French Initiative" to "revive" the Peace Process between Israel and the Palestinians commences on June 3rd , as Paris hosts a Middle East Summit, with the participation of many, aside from ... Israelis and Palestinians.

However, in case you were hoping for an ounce of creative thinking or an "out of the box" idea to spring out of this gathering, I recommend you don't hold your breath. In a document, published by the French Foreign Ministry ahead of this one-more International Peace Conference on the Middle East, France makes it abundantly clear that "the two state solution is under increased threat particularly with regard to continued settlement activities". Same old settlements again, as if there is nothing else to discuss. Not a word about Palestinian ongoing violence against innocent Israelis taking place in Israel in recent months, and not even a slight hint at any Palestinian culpability for the current stalemate, for instance their continuous and stubborn refusal to negotiate directly with Israel.

Not a doubt we should all work to assist in bridging the gap between Israel and Palestinians. Indeed, it was Israel's Prime Minister himself, Benjamin Netanyahu, who called - yet again - only two weeks ago for the resumption of direct bilateral negotiations with the Palestinians, with no interest whatsoever from their side to do so. Why would they be interested, really, when they realize that the more they DO NOT negotiate with Israel the more pressure will amount on Israel as it is the only one described as "rejectionist"? That way they will not have to negotiate nor to even contemplate any "painful concessions". By doing so, the world itself is pushing away the prospects for a solution, while pretending - or even believing - to be doing the exact opposite.

Expect the expected this week from Paris, or as columnist and former diplomat Jeffrey Robbins summarizes it beautifully in the Boston Herald: "In Paris this week, the charade proceeds as before. The Palestinian rejection of the very two-state solution they profess to seek will continue. Their rejectionism will be excused, the rejectionists coddled. Israel will be lambasted, as always. "

The truth is no real progress shall ever be made without addressing the core issue which is mutual acceptance of one another and the EDUCATION for peaceful co-existence. Palestinian officials incite youngsters against Jews and Israel. Official and unofficial media outlets - TV, radio and social media - depict Israel in anti-Semitic terms and hatred of anything Jewish has become synonymous with the younger generation's view of Israel.

Palestinian textbooks continue to contribute their share to this poison. IMPACT-SE, Institute for Monitoring Peace and Cultural Tolerance in School Education, a non-profit organization that monitors the content of school textbooks based on international standards of education for peace and tolerance, published a report this week after looking into the situation in Palestinian Schools (those under direct supervision by the Palestinian Authority, Israel's purported peace partner). The results are far from encouraging: no focus on peace in official Palestinian textbooks where the narrative is one of a perpetual struggle and war, through legitimizing violence while Israel exists only as an enemy, not as a partner. All this while the international community provides substantial financial support to the Palestinian Authority, funding many a time these schools and those media outlets! Where is the transparency in funding? Where is accountability? and how do we make sure that your tax money will not go towards funding hatred and bloodshed?

The first step is to look reality in the eye, not ignore it. Clearly, this is no way to build peace between people, but rather guarantee hostilities for more and more generations to come. It is time we heed the call of conscience, remove the blindfold from the world's eyes, which was put there willingly, and deal with the core issues, as tough as that maybe. E D U C A T I O N is the only way.

Oh, and with all due respect to the Louvre in Paris, let's do it in Jerusalem this time. 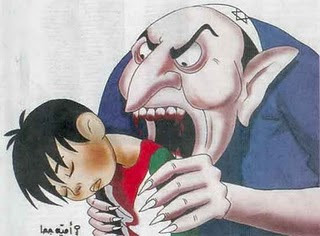 An Example of Anti-Semitism in Palestinian Media