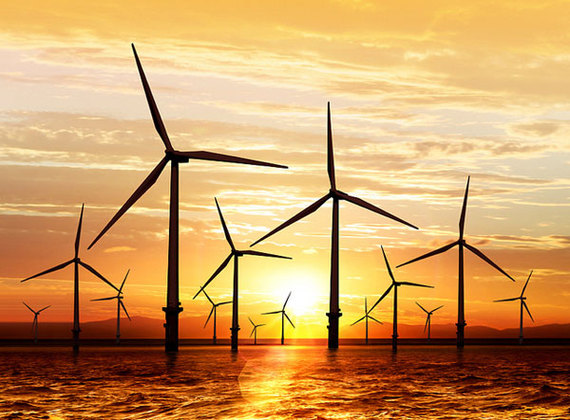 Looking across the calm, smooth Atlantic waters from the docks of the small island town of New Shoreham, Rhode Island, it may be hard to tell, but preparations are well underway for the nation's first offshore wind farm to begin operating here before the year ends.

Last fall, wind developers laid five foundations for the turbines that will spin in the Atlantic Ocean, three miles southeast of Block Island and east of Long Island.

Last week, officials held the latest in a series of community meetings to discuss the action expected in the months ahead. At the moment, the focus is preparing the way for the 20-mile cable that will distribute power from the DeepWater Wind turbines to the mainland.

"We've talked about this project for a while, and now we're going to start impacting the island. We're almost ready to put shovels in the ground," said Kathryn Cox-Arslan of National Grid, the company who's installing and will operate the cable, according to the Block Island Times.

Block Island is perfectly suited for offshore wind. The turbines are located in a renewable energy zone designated by the state of Rhode Island several years ago.

As Slate contributor Daniel Gross has pointed out, the project is also in the environmental and economic self-interest of Block Island. Because the community isn't connected to the mainland grid, right now its electricity comes from burning diesel that's ferried to the island - a dirty, disruptive, and expensive way to get power.

By contrast, the wind turbines will create plenty of pollution-free energy right where it can be used on the island, plus additional electricity that's contracted to be sold and distributed on the mainland. As Gross explained: "In essence, the wind farm will displace the diesel generators at about the same price, create new infrastructure, and funnel emissions-free power into Rhode Island's larger grid."

The potential for offshore wind is virtually limitless, and developing just a fraction of it could power all the households of New Jersey and South Carolina combined.

A third of the U.S. population lives on the Eastern seaboard, right where offshore wind power could be easily delivered and at times when it is needed most: afternoons, summer heat waves, and winter cold snaps.

Wind power would help offset dirty energy up and down the coast just as it will in Block Island. The projects already in development off the East Coast could avert 9.3 million tons of the carbon pollution fueling the climate crisis, not to mention all smog and soot pollutants that threaten our health. Furthermore, if East Coast states go big on offshore wind as part of a comprehensive plan that ramps up energy efficiency and other renewables, they can avoid costly investments in fossil fuel infrastructure that will lock in pollution for decades.

Just as Rhode Island officials did for the waters off Block Island, the Obama administration's "Smart from the Start" initiative is working to designate areas up and down the East Coast suitable for offshore wind development, with the aim of building community support on the front end for responsibly-sited turbines.

And while electricity prices are not as high everywhere on the coast as they are on Block Island, they can be volatile. As more regulations controlling carbon are adopted, they'll also go up. In fact, a 2014 study found that New England consumers could save 2 percent on their bills if the areas designated for offshore wind were developed and added to the region's energy portfolio.

How can the rest of the East Coast catch up to Block Island? It all comes down to forward-thinking policies at the federal and state levels.

We need the Bureau of Ocean and Energy Management to continue its leadership on offshore wind through programs like the Smart from the Start Initiative.

We need Congress to extend tax incentives for offshore wind power investments until after 2022, when most offshore wind projects are expected to come to fruition.

And we need governors and state leaders to make clear and bold commitments to offshore wind, just as Rhode Island has; and encourage more long-term power-purchase agreements for offshore wind projects, just as the Massachusetts House is poised to propose.

With the right policies in place and continued vision from our political leaders, Block Island is just the beginning.