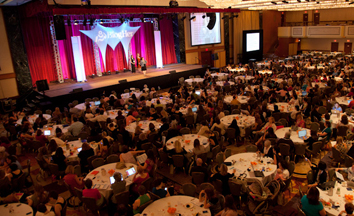 The Hilton Hotel in New York City was packed on August 6th and 7th with 2400 attendees who had come for the 6th Annual BlogHer Conference. The last time I had been in the Grand Ballroom was to see Hillary Clinton and Barrack Obama onstage, for a post-convention unity event. Ironically, it was the divisive politics of the 2008 election that pushed greater numbers of women into the blogosphere, as they clamored to make their opinions heard.

That same year, the New York Times covered the San Francisco BlogHer conference with a story--on their fashion page--that had a tinge of snark. Now, in 2010, no one doubts the influence or economic muscle of women online. Anyone who remains unconvinced needed only to navigate the exhibition hall lined with 100 sponsors (a 50 percent increase over last year). Natural and green items, kids products, and an array of services all shared the floor. From the smaller supporting sponsors like thredUp (a children's clothing exchange) to the ranks of the top "Diamond" brands such as Pepsico and Procter and Gamble, the message was clear. Women have clout to be reckoned with. As consumers--they are able to drive purchasing dollars.

When I asked a number of the corporate reps why they had chosen to be present at BlogHer, their answers all echoed the same mantra. Amy Goodman, Fashion Trend Director at Timex said, "We're working to make more connections in the blogosphere and to provide content opportunities." Their booth was devoted to the company's Fall line of watches. Anne Westbrook, handling External Relations for Procter and Gamble, told me that P&G was back at BlogHer for its second year. "We're here because women bloggers are major influences. We want to talk with them on their terms and bring them opportunities and relevant content." In their large, house-styled booth was a full range of brands from CoverGirl to Bounty. I gravitated to the demonstration of their project, "Clean Water Blogivation." The social media campaign was designed to "showcase the power of female bloggers to improve the lives of people in need of clean drinking water," and to enable "women bloggers to be part of the clean water solution."

PepsiCo chose the BlogHer conference to roll out their new women's platform, "Women, the 5G Network." A "Sofa Summit" breakfast early on Saturday featured top female brass from the PepsiCo team in dialogue with Campbell Brown. I contacted Jamie Stein, Director of Communications for Tropicana and the point person on PepsiCo's online women's initiatives, for a comment on their interest in the women's blogging sector. She replied via e-mail, "Women are, and have always been, incredibly influential on social issues, in business and at home with their friends and families. Now, with connectivity, women are wielding even greater power. As a company, we want to help enable the change women see, through innovative platforms like our 5G Network online channel and interactive experiences at events like BlogHer."

On the look out for socially conscious business tie-ins, I learned that Liberty Mutual was onsite to familiarize women with their mission, "The Responsibility Project--exploring what it means to do the right thing." Paul Alexander, the Senior VP of Communications, walked me through the company's profile and its commitment to the "culture and values of integrity, dignity, and respect."

Whether in the exhibition hall or over lunch, I saw a lot of action. Connections were being made. Women had come to learn, build their brands, and be energized. Eyeballing the crowd, I saw moms with babies in strollers or on their backs (yes, there was a place to breastfeed) and a wide range of ages. Elisa Camahort Page, BlogHer's co-founder and COO, explained to me in an e-mail that one of the hallmarks of their events is diversity. Regarding the speaker roster she wrote, "One third of our speakers were women of color, a slight improvement over last year. We also ensure that we bring both liberal and conservative voices, LGBT voices, mom and non-mom voices to the microphone."

The keynotes and panels delivered. With forty-two sessions divided into seven verticals (change agents; passion; personal; professional; geek lab; writing lab; job lab), participants could be heard lamenting the difficulty of having to choose between topics.

"The FTC Guidelines: After a Year, Has Anything Changed," had a room full of people trying to get a handle on the Endorsement Guidelines that were put in place to insure that "no deception in advertising" occurred on blogs. Top advice included being transparent, explaining connections to advertisers, and keeping disclosures in close proximity to the content. One fundamental boiled down to, "When you get a product or cash, you must disclose; when you are not compensated, you don't." Stacey Ferguson, Senior Attorney in the FTC's Division of Advertising Practices, suggested the safest approach--"When in doubt, disclose."

At "Creating Tangible Social Change: How to Move People to Action," led by Women and Hollywood's Melissa Silverstein, each panelist described how they were impacting specific communities. Beth Terry, writing at Fake Plastic Fish, blogs about "living life with less plastic." Terry discussed how her writing had helped to revise the plastic filter recycling policies of Britta in the United States. Stephanie Himel-Nelson, the Director of New Media at Blue Star Families, outlined how the organization's blog--dedicated to supporting and empowering military families--was becoming a go-to resource. The biggest laugh lines went to Gina McCauley. The founder of two blogs, What About Our Daughters and Michelle Obama Watch, she is also the organizer of the Blogging While Brown conference, the first conference for bloggers of color. Answering a question on how she handles personal attacks and negative feedback, McCauley responded, "I've built up a lot of scar tissue and taken a lot of body blows." On dealing with trolls she advised, "Don't engage with people on platforms you don't control." She added, "She who pays the hosting fees makes the rules!" All the speakers emphasized that an "authentic voice" was more potent than stats on page views or the number of Twitter followers. McCauley pointed to one of her most valuable realizations from the blogging experience saying, "It brought out the reality that my ideas matter."

Saturday's morning keynote featured the International Activist Blogger Recipients. They were Esra'a Al Shafei, the founder of Mideast Youth; Dushiyanthini Pillai, the force behind Humanity Ashore; Marie Trigona, who publishes Latin American Activism; Freshta Basij-Rasikh, who contributes to the Afghan Women's Writing Project. It was a dynamic and moving presentation. The focal points of their respective blogs included bringing together young people in the Mideast region, human rights, war and landmine victims, the 30,000 who disappeared in Argentina during the 70s and 80s, and developing a platform for Afghan women to tell their stories. Underscoring the importance of global issues widened the perspective of the conference. It also made it impossible to ignore the risks being taken by these bloggers, a contrast to the secure setting of the BlogHer event.

Immediately afterwards, I attended "Radical Blogging Moms: Don't Even Think of Not Taking These Moms Seriously." Joanne Bamberger (PunditMom) moderated. Stephanie Roberts spoke about her photographic and digital documentary work. Annie Urban discussed how her anger had pushed her to become politicized. At her blog, PhDinParenting, Urban has been an outspoken critic of the Nestlē Corporation for "unethical business practices." Urban uses stories to explain a situation, rather than "prescribing or instructing." She shared an interesting anecdote about how the legal firm employed by Nestlē had been scrutinizing her blog.

A number of women in attendance entered the blogosphere in response to family concerns, personal challenges, or the need to reach out and build a support system. I met and spoke with Ellen Seidman, a magazine editor who writes "Love That Max--A blog about kids with special needs (and the parents who adore them)." There was a panel on "Blogging Autism: Shattering Myths, Opening Eyes and Finding Your Tribe" and one entitled "Grief, Loss, Tragedy and Community on the Internet."

The closing keynote was "How to Use Your Voice, Your Platform and Your Power." Alison Stewart helmed the dialogue with The White House Project founder and president Marie Wilson, author and activist Gloria Feldt, and journalist P. Simran Sethi. The participants parsed the question of power. Earlier, the audience had been reminded that in 2009, BlogHer placed #4 on Katie Couric's list of the "seven most powerful people in media". The prevalent question was how to best leverage the power of women in the blogosphere--which was characterized as "the great equalizer." With the democratization of the media, Simran Sethi asked, "How do you want to use your voice?" Wilson stressed the importance of women running for office and becoming part of government. Feldt, who has a book coming out on "how women can change the way they think about power," insisted that women have more of it than they realize. She noted that corporate sponsors were "finally getting the picture," but questioned if women understood the full import of what that entailed. When I contacted her for additional thoughts on this concern she wrote me, "The two floors full of exhibitors aren't here just because they love us. They're here because they know the power of women's collective purse. So we need to use that power intentionally and collectively to shape the consumer market, to get what we want--whether it's healthy snacks for our kids, green products, or shoes that are comfortable rather than hobbling us--and not allow ourselves to be bought."

Before taking questions from those sitting at tables in the ballroom, Stewart asked each woman to speak about their own most difficult moments. A roar of laughter greeted Wilson's comment, "Behind every success is years of crap." Listening to women from the audience, it was clear that a sense of validation was achieved from their blogging contributions. One woman reveled in the realization that online, she was understood. "Wow," she exclaimed, "You get me!" Another participant thanked the speakers and the conference planners for "lighting candles in the darkness."

Whether a woman was reaching out to build a community of mothers, dish on beauty and style, reflect a political agenda, or explore a lifestyle choice, it was clear that the BlogHer'10 demographic had a wide range of motivations and interests.

The general consensus was that once you were out there, pushback would be inevitable. The response to that fact was the same...at every session across the board: "Stand your ground and keep writing."

This piece originally appeared on the site mgyerman.com.photo: