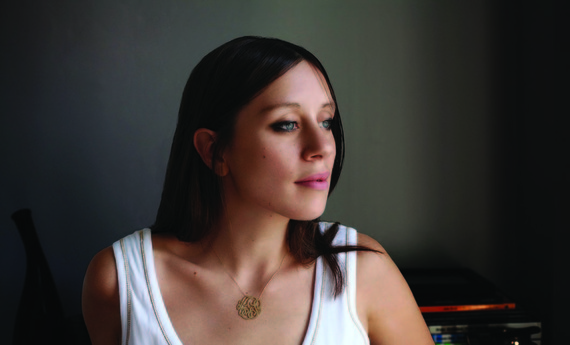 Anna Godbersen is the bestselling author of The Luxe series and Bright Young Things. Her new novel, The Blonde, is her first foray into adult fiction and is a compulsively gripping read. It re-imagines the life of Marilyn Monroe in a way that becomes a thriller/mystery with a truly amazing twist at the end. The Blonde is available everywhere on May 12th.

Give a brief description of the novel's premise.
The premise is that Marilyn Monroe is the fictional creation of a Soviet agent who helped her change her looks and made Hollywood connections for her. Her persona and fame were, in essence, given to her to enable her to get close to the president of the United States and obtain intelligence for the KGB. The story takes off from there.

You must have done extensive research for the novel.
I did a good deal of research. While I was interested in reading conspiracy theories, I was more taken by the idea of describing the inner life of Marilyn Monroe in a way that showed how she was able to obtain her power as a human being. That was my main interest even before I did any research.

As a technical matter, did you watch all her movies?
I didn't. A movie I saw repeatedly was Some Like it Hot. I did see many of them, but not all.

Did you read biographies about her?
I tried not to read too much about her life. I didn't want to inadvertently steal anything. I did read Anthony Summers' biography of Marilyn and a few others. I also read the Gloria Steinem's, Marilyn. It's a wonderful book that gets to the heart of what Marilyn Monroe's persona meant to the culture of the 50s and 60s, and what she means, even now.

The novel contains dialogue between and among Marilyn Monroe, JFK, RFK, Arthur Miller, Frank Sinatra, Peter Lawford, Clark Gable and others, all of whom are gone. Were you concerned the estates of these people might bring up liability issues?
Sure. But it is a novel. It's absolutely a work of the imagination. It's really a constellation of questions asking what these people meant to the culture of the time. As a fiction writer, when you get into the magic of the writing, it has its own motor, its own inner logic. You trust in yourself and in your muse. I wasn't trying to recreate what I thought these people were like, but rather, I was creating characters I'd been living with in my mind--what I instinctively believed fictional characters would have said and been like. As I wrote this I thought a great deal about what Kennedy was to people, and what Marilyn's persona meant, and I wondered why we still think about them as much as we do. They both had a multitude of personas and meanings.

Let me quote from the prologue:

"This isn't how you imagined it'd feel to be alone with Marilyn Monroe, is it?" she asked the man sitting across from her. "You figured I'd be a hundred and twenty pounds of quivering delight, whispering cotton candy and blowing kisses. Well. All that burbling sweetness isn't a lie, not totally, but men can be so stupid when it comes to vulnerability. They forget that vulnerability can be itself, and can also be a shield, and also a knife. Any old thing can be a weapon, so long as you know how to use it right."


How did you capture her voice so beautifully?
I was just fascinated by her. I closed my eyes and went with it. The reason I wrote the prologue in first person was to write Marilyn with an "I." In a sense, I could enter into Marilyn that way. Later, I wrote in the third person.

You captured her voice so well--first or third person--I felt I was inside her thoughts.
Thank you. That was part of what I wanted the reader to experience--her inner mind. I think she was probably a far stronger person than the usual portrayals of her. There's a line in the Gloria Steinem book that refers to Marilyn as a female impersonator. And I think she did give the ultimate performance of softness, of feminine vulnerability and need. I found that fascinating--thinking not only about Marilyn, but about men and women, and gender relations at the time.

Even now, we all play a part in perpetuating these stereotypes. In thinking about Marilyn and her life story as well as her longevity and power as a performer, I concluded she must have had intense will and inner strength. Yet, we remember her for her aura of intense childlike sweetness and vulnerability. I found that contradiction fascinating and wanted to convey it in the novel. How could a person we thought of as soft as Marilyn have had the resourcefulness and inner control to have actually been a Soviet spy? But, of course, the stereotype of her as being drug-addicted and a sexual magnet persists. But I think beneath all that, there was much more.

You managed to convey a smoldering intelligence, even cunning, in her inner life.
That's partly what I wanted to do. And I think she actually was very intelligent.

Was there some incident or impetus that led you to write the novel?
It just struck me as an idea--one that nobody had done before. In a way, Marilyn Monroe is still a presence in pop culture. Once a year she's on the cover of Vanity Fair. Once I got into the research, it seemed more and more plausible to write this story. And I went with it.

What were the early reading influences in your life?
I was a shy kid surrounded by plenty of books. As a teenager I loved fantasy and historical fiction. It's the most transporting fiction. It allows you to imagine yourself in the world in the most expansive way. My first literary hero was Joan Didion.

Who do you read now?
I still love Joan Didion, especially her novel, Democracy. It blends fact and fiction, history and imagination. I really enjoy John Le Carre and Graham Greene. The writing is incredible and has a certain level of engagement with the real world.

As does The Blonde engage the real world of its time.
Yes, I find the interface between fact and fiction quite fascinating. It can be difficult to know where one ends and the other begins.

What's next for you?
I have two ideas cooking right now. I want to keep writing adult fiction. My first seven books were Young Adult and this is my first adult fiction.

Can you pinpoint anything that caused you to make the leap from YA to adult fiction?
I wanted to push myself. For me, the great thing about writing YA fiction is that I feel a responsibility to embed in the story a message that the world is bigger than you think it is. It will open up to you, the braver you are. That's something you want to tell teen-agers, but it's not what you tell adults. With adult fiction, the opposite seems to be true. You're somewhat trapped and closing in on your characters. I became interested in writing for the adult mind.

Is it fair to say you transitioned from the optimism and openness of youth to the cynicism and closed-ended nature of the adult world?
(Laughter) I think that's true in a way, but weirdly, I think the opposite actually happened in my personal life. The process of writing this adult novel was very fulfilling for me. It came naturally, and there was a flow in it for me. In writing this, I got to express my own views and interests. I also got to read many things that fascinated me. And it all came together in a magical way. Although the novel itself is kind of cynical, the writing of it was not a cynical process.

Congratulations on having written a riveting novel that captures Marilyn Monroe, Hollywood, and much more. It takes a truly talented novelist to make words on a page bring back an entire era of American life...and tell a great story as well.