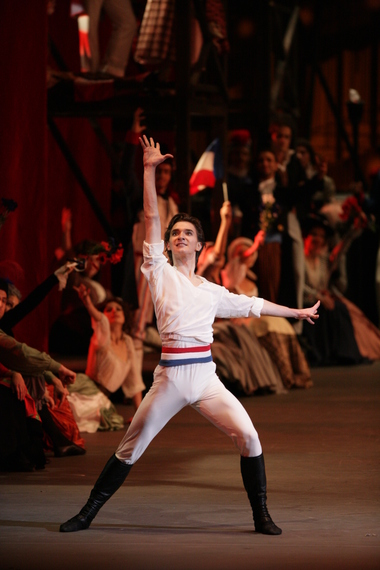 In a remarkably apropos programming coup for these unsettling political times, the Hong Kong Arts Festival offered two notably different works that shine a light on the collateral damage of political fanaticism.

At Hong Kong's City Hall, a newly commissioned chamber opera, Datong: The Chinese Utopia highlights the struggles of a pioneering Chinese feminist and her daughter during the Cultural Revolution.

Across the harbor, the Bolshoi Ballet launched its weeklong run at the Hong Kong Cultural Center with Alexei Ratmansky's subversive updating of Vassily Vainonen's 1932 The Flames of Paris. Ratmansky's revisionary twist to the French Revolution-themed classic of Soviet agitprop proved an instant hit in Russia at the time of its premiere in 2008, but also attracted some charges of blasphemy. The Vainonen original was enormously popular through the 60's, and was reportedly a favorite of Stalin -- not surprising, given its revolutionary zeal and its depiction of the comeuppance of a degraded aristocracy.

Ratmansky enjoyed poking fun at the aristos (and what a great excuse for rolling out the finery and the chandeliers) but he then turned the story on its head by introducing a doomed romance, whose shattering exposes the sordid underbelly of glorious revolution.

He makes us care greatly about this couple -- the hotheaded idealist Jerome, whose dream is to join the revolutionaries, and Adeline, the noble-hearted daughter of an unsavoury Marquis -- by giving them a yearningly beautiful pas de deux in Act II. Full of swooping promenades in backbend, and swaying as if pummeled by invisible forces, their partnering portends a tragic end. Vyacheslav Lopatin and Anastasia Stashkevich are breathtaking here: she is delicate and radiant, with gorgeous but unaffected melting arms; he is a self-effacing and devoted partner, dreading the future as he realizes that they may not have much time together.

When the end comes, it is swift and terrible: Adeline, who has been sheltering among the revolutionaries since she fell for Jerome, is exposed as a member of the 1 percent, and is dragged to the guillotine after her father. Jerome is powerless to save her. Numb with grief, he is trampled by the crowd that advances belligerently toward us in menacing, unison steps, brandishing their muskets. Just in case we missed the point, Ratmansky has Jerome clutch a grisly skull.

This march took place in the middle of the Vainonen production, to the strains of Ça ira ("It'll be fine," the revolutionary anthem whose lyrics called for the lynching of the nobility and the clergy.) That Ratmansky introduced the guillotine to magnify the hostility of this scene, and chose to end the ballet with it, rather than a feel-good populist celebration, underscores his wariness of the fanaticism fanned by revolution. 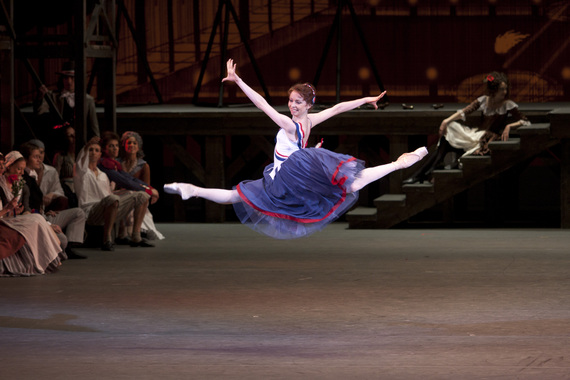 Ekaterina Krysanova as the revolutionary Jeanne in The Flames of Paris (Photo: Elena Fetisova)

Adeline and Jerome's tragic tale is a Ratmansky interpolation. He preserves the original heroic pair of lovers: a Marseillais fighter, the handsome, manly Philippe (danced by the handsome, manly Vladislav Lantratov) and the spunky Jeanne (Jerome's sister, danced by the adorable Ekaterina Krysanova). A Pippi-Longstocking-on-speed, Jeanne joins her lover and brother in the electrifying Basque dance; it is a hallmark of Bolshoi training that Krysanova brings the same style and temperament to her character dances that she does to her classical variations, which she rips off in blistering fashion, barely bothering to come down from pointe to propel herself into grand jeté.

The Russians are dead serious about their folk dance; you never get the sense -- as you often do with non-Russians -- that these scenes are built in to give the dancers a break from their classical exertions. All the stamping and whirling and hopping and bending from the waist are key to revealing the character and fervor of the common folk, executed with fastidious attention to detail, down to the fingertips and angle of heads thrown back.

The same is true for the courtly dances -- in this ballet, the last hurrah of a decaying nobility. Denis Medvedev is an exquisitely hapless Louis XVI, an Emperor with No Clothes, who fails repeatedly in his attempts to execute a classic male bravura turning jump. His comic flat-footed thuds are imitated by his mindless courtiers, unaware of how ludicrous they look.

Ratmansky retains Vainonen's familiar choreography for Jeanne and Philippe's joyful wedding pas de deux, in which they playfully egg each other on through the usual bag of ballet tricks. Lantratov and Krysanova do not disappoint, their every move bold and fearless.

In contrast, the delectable pair of Nina Kaptsova and Artem Ovcharenko distill the principles of classical ballet to a precious and faintly ridiculous essence in the court divertissement 'Rinaldo and Armida,' with Kaptsova poured into an 18th century version of Madonna's bustier by Jean Paul Gaultier. 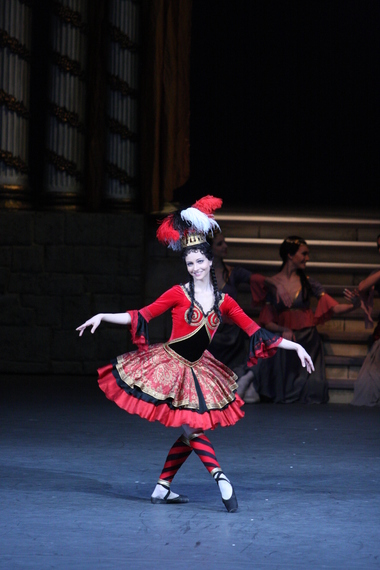 Nina Kaptsova as the actress Mireille in the 'Rinaldo and Armida' ballet-within-a-ballet in The Flames of Paris (Photo: Elena Fetisova)

Once the court is decimated, these actors-for-hire conveniently realign themselves with the revolutionaries. Now outfitted in gorgeous floaty ensembles of sheer gold and backed by a chorus of Mariannes in Grecian tunics, Kaptsova and Ovcharenko headline the Freedom dance; they soar against the backdrop of Boris Asafiev's sublimely ecstatic score.

Ratmansky's ability to move us in whatever vernacular he chooses is displayed again in the brief but poignant farewell scene in which Jerome and Jeanne take leave of their anguished parents. Jerome is now a wanted man, after he assaulted the Marquis who had attempted to rape his sister, and the two have decided to run off with the revolutionaries. The heartbreaking family pas de quatre is executed in a contemporary vein that somehow seems perfectly appropriate to the moment.

And then again he ventures off to Hollywood's Golden Age with his choreography for Armida's four friends. Most notable among these statuesque bathing beauties was the captivating Maria Zharkova.

A side note: Ballet to the People finds distracting the Bolshoi's penchant for milking every opportunity to take a bow, though Nina Kaptsova's campy curtseys at the end of 'Rinaldo and Armida' were perfectly in keeping with that scene.