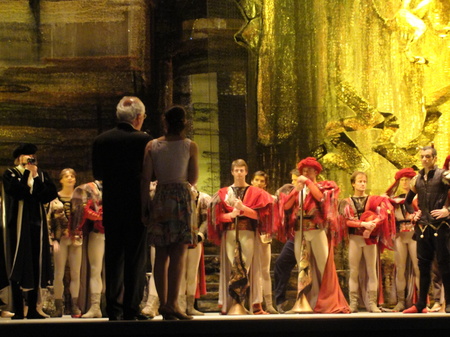 Last week, Nigel Redden, the director of Lincoln Center Festival, stepped out onto the stage of the David Koch Theater and greeted the company of dancers assembled there.

Twenty artists of the Bolshoi Ballet, dressed in the flowing skirts, coats of arms, and vague but non-specific national folk costumes of Swan Lake, applauded their host's assertion that "art speaks in one language."

It was understood that Redden was referring as much to Washington and Moscow's cross-purpose negotiations over Ukraine as he was to the language barrier between the dancers and most of the Lincoln Center staff.

As I wrote in May, the unfolding civil/guerilla/partisan war in Ukraine does not directly threaten US interests, and hence is unlikely to disrupt the Russian company's first tour to New York in nearly a decade. The seizure of Crimea, I wrote at the time, is no Cuban Missile Crisis.

But on the same day the Bolshoi premiered in New York, the Obama administration piled on extra sanctions against Russian businesses, and Vladimir Putin re-opened a dormant spy base in Cuba.

This week's catastrophic downing of a passenger jet over Ukrainian airspace ratchets things up further. The world might ignore a peninsular grab, but it doesn't easily forgive massive collateral damage strewn across Luhansk. The Security Council has taken up the matter, and we're getting closer to Cuban Missile Crisis level urgency.

The comparison may be inaccurate in geopolitical terms, but it is spot on in ballet history terms: in the autumn of 1962, as the U.S. and the USSR came as close to mutual destruction as they could, the Bolshoi Ballet was on tour in America. The Russian dancers arrived in the capital about a week after the Cuban Missile Crisis was resolved and were greeted with standing ovations and a White House reception.

Three weeks prior to that, they were on the West Coast performing Spartacus, when a U.S. plane was shot down by in Cuba. It was a spy plane, not a commercial jet. And Moscow owned up to it immediately, having no shadow separatists to hide behind.

The Bolshoi performs Spartacus at Lincoln Center next weekend. It's not a popular ballet abroad, and the company's Swan Lake was already panned by a bored New York Times' critic. At this point, perhaps only a miraculous de-escalation will win the dancers a standing ovation; a White House reception is definitely not in the cards.

A week is an awfully long time when an international crisis is brewing; it's a good thing that everyone at the Koch Theater speaks "in one language."