On August 7, 1998, between 10:30 and 10:40 a.m. local time, the U.S. embassies in Nairobi , Kenya and Dar es Salaam, Tanzania were attacked in coordinated truck bombings. Approximately 212 people were killed and an estimated 4,000 wounded in Nairobi,, while the attack killed 11 individuals and wounded 85 in Dar es Salaam. The bombings were timed to mark the eighth anniversary of the deployment of U.S. troops to Saudi Arabia and were later traced to Saudi exile and al Qaeda leader Osama bin Laden. 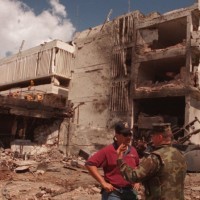 In November 1998, the United States indicted Osama bin Laden and 21 others, charging them with bombing the two U.S. embassies and conspiring to commit other acts of terrorism against Americans abroad. To date, nine of the al Qaeda members named in the indictments have been captured.

This Moment was compiled from an interview by ADST with Vella G. Mbenna (interviewed beginning in 2016), a Support Communications Officer at Embassy Dar es Salaam. You can read the entire Moment on ADST.org. This Moment was edited by Erika Saunders.

MBENNA:I went to my office and opened up and started my morning IT/communications routine. Shortly afterwards, the young lady who had just arrived a day or two before to replace me came in.

I needed to give her a turnover briefing because she was going to work alone until the new chief of communications arrived in about a week or two. I shared a few things with her, but before we got to the heavy and critical turnover known as COMSEC [communications security], she asked if she could in-process with a particular office because the person in charge was leaving for vacation.

So, I was glad for the break because I could run down to get the female guard application. However, about 20 minutes earlier I had asked the operator to place a call to the Embassy in Pretoria, South Africa....

After leaving the center where I worked and passed the area around the corner where the Front Office was located, I heard a faint phone ringing. I stopped in my tracks, turned around and entered the communication center to find out that it was my phone.

I quickly went to the back of the center to my office to get it. It was Pretoria on the line and I was glad. I sat in my chair and said these words to them, "I am Vella from Dar es Salaam and I was wondering why our system's staff ....."

Before I finished the sentence, the blast occurred because the wall I was facing came back in my face and slammed me into racks of equipment across the room. 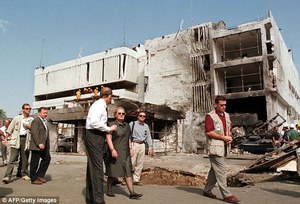 I recall getting up, brushing myself off and proceeding to alert Washington via my equipment that something bad had happened and to close our circuits for now. Then I proceeded to check on colleagues in the communications suite and putting communication and IT stuff in a safe. The security Selectone [alarm] sound was loud and constant and annoying but music to my ear to keep me on my toes quickly securing things.

After I was comfortable that my communication center was OK, I got my purse and my INMARSAT [satellite communication system], secured the communications center, and started walking around the corner to get out of the Embassy.

When I turned the corner, I saw the devastation that had occurred. Furniture, paintings, parts of the building, window glass, paper, pencils, and much more were in the walkway. I had to carefully work my way through it.

When I got to the Executive Suite [where the Ambassador and Deputy Chief of Mission have their offices] door, I looked in and saw no one but I thought I was dreaming. The place was in shambles and the window glasses out. Desks were turned over, couches turned over, office supplies everywhere.

I then thought, "Where are they?" After about a minute of just staring to see if there was life in that suite, I proceeded to walk to towards the narrow catwalk that connected the two parts of the building. In the center of the catwalk was the stairs that led downstairs behind Post One [the Marine Security Guard post at the embassy's main entrance] and out the front of the Embassy.

I looked down and saw things and ceiling debris on it. Before I attempted to go down it, I wanted to go to the other side of the door I was facing to see how the other Americans and FSNs were doing.

I was afraid and then I realized something else. It was quiet. I did not hear the security Selectone anymore. I had no idea how long it was quiet, but I know I could hear the quiet...It was crazy, but I really could hear the silence.

I walked on and opened the door to the Admin building side of the building....What I saw without even entering deep into the building was complete chaos. It was more of what I saw in the Executive Office, but to a greater extent. It was like a meteorite had hit the Embassy. Even worse was that the entire wall and windows facing the road was gone.

I started having a really bad feeling because most of all I saw or heard no one. Why was everyone gone except me? I backed out of the door and back onto the catwalk and started down the stairs. As I started down the stairs I realized that something bad had happened, something really, really bad. I thought that maybe that if it wasn't a meteorite, then a space ship came down and the aliens took up everyone except me.

I wanted to start screaming for help...Then I thought, no one would know exactly what happened to us all. So, I tip-toed down the rest of the stairs.

When I saw more devastation and how I appeared to blocked in, I had to scream. I started screaming for help, first a low scream...and then louder.... 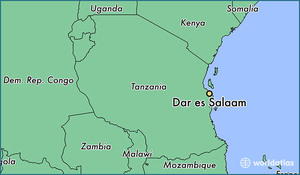 After about a minute and a half I heard a familiar voice calling out asking who was there. It was a Marine. I told him it was Vella, the communications officer from the 2nd floor. I wanted to be as clear as possible, even though I knew the voice. Once I told him exactly where I was, he told me to try to climb over the rubble and look for his hands. I told him I was going to throw up the INMARSAT first and I did. I started carefully climbing until I saw his arm reaching out. I grabbed his hands and he carefully helped me around the mound of rubble. I followed him to a set of emergency stairs to the outside of the building. On the outside is where I found the CDA [chargé d'affaires] John Lange, our security officer, a few Marines, and some other Embassy officials. I quickly ran to the CDA and asked him if he wanted me to set my INMARSAT.

He said no, and that I should leave for the safe haven (the DCM's house not too far from the Embassy). Someone told me that the van was on the outside of the back wall and we walked quickly to the area. The driver of one of our Embassy vans waved for me to come and get in. I grabbed my INMARSAT and ran into the van.

There were a few other folks on the bus and everyone looked terrified. I then realized that I needed to find the new lady who came to replace me. No one knew but then I heard this cat-like voice from someone sitting a few rows behind me.

I looked at the person and the tip of the nose was ripped almost off. It looked bad. I did not recognize the person so I asked again for the lady who was there to replace me. I heard the cat-like voice again, and again I looked around, and this time the lady waved at me and I heard, "It's me, Liz." I had to look closer. It was her and I was relieved.

After a minute or so more, the driver came in and we drove to the safe haven. After just some minutes there and realizing that folks could not talk on the radio, I figured the repeater on the Embassy roof was down.

I ran to find a driver to take me to my house to turn on the backup radio system. I could not find anyone, so I ran onto Toure Drive and tried to wave down a cab, but no one stopped . After about a minute, I was determined to stop a taxi, so when I saw one coming from afar, I jumped in the road and started waving my arms for it to stop. He did. I told him that something bad had happened at the Embassy and that I needed to go home down the street....

When I got home, my house girl Sabina saw me and immediately started wiping the blood from me and pulling my shirt off. She asked what happened and I told her something happened at the embassy but did not know what....

I started hearing talk on the radio and it was music to my ears because I knew the embassy folks could communicate now. Over the next few hours and days and weeks, I did quite a bit to get communications back up and running at an alternate location in town. It was a lot of work and people pitched in to help....

The building was destroyed, so yes, that facility was permanently closed. We set up a temporary safe haven at the DCM's house for a few days. Then, we took over the Public Affairs Office (PAO) house as a semi-temporary location to work from. 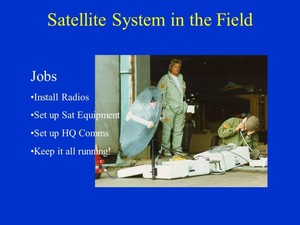 I started working closely with the Ops Center and the Information Resource Management Bureau (not called that back then), to secure approval to set up communication with what I had beyond a phone line and fax. The embassy did not have much to work with, but we were able to communicate....

One thing I admired about leadership that day and as long as I remained there is that Ambassador John Lange really cared about us and stopped to ask if we were OK or had everything we needed or told us to take a rest. He also saw the worth in my expertise and had me tag along to several meetings in case he needed to place a call or receive a call.

It made me feel really special that he valued his communications officer. He was a nice and respectful person, even before the attack and he gets in touch with us (those under his regime during that period) every year around that time.

Not many were killed in Tanzania -- less than ten. Unfortunately, the female Tanzanian guard at the booth who was waiting for me to get her application was one of those killed that day.

It horrifies me to think that if I had not received that phone call and returned to my office, I could have been right next to her or my car, which coincidentally was destroyed beyond normal recognition, and more than likely killed too. I thank God for that phone call and sparing my life.