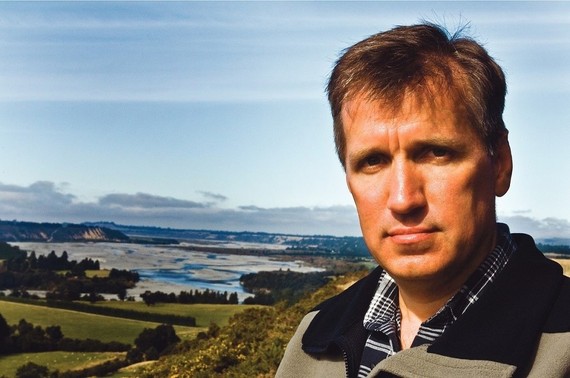 James Rollins is the New York Times bestselling author known to millions of fans for his speculative adventure fiction. His novels take readers to unknown worlds, and across eons of time, reminiscent of books by Michael Crichton, H.G. Wells, and Isaac Asimov. Formerly a practicing veterinarian, James Rollins began writing fiction and turned his imagination and love of science into mesmerizing stories that have made him one of the world's best storytellers.

The Bone Labyrinth begins in Croatia, where an archaeological team discovers a subterranean Catholic chapel; the bones of a Neanderthal woman; and elaborate primitive paintings depicting the story of an immense battle between tribes of Neanderthals and monstrous enemies.

The archeologists are attacked; and at the same time, a primate research center near Atlanta is targeted in a bloody assault. Determining the source of the violence presents Commander Gray Pierce with a perilous puzzle trying to understand events from thousands of years earlier. A dark conspiracy is afoot, one that will use genetic science to not only trace the evolution of human intelligence to its source, but to threaten the future of humanity.

I know this novel started out as an exploration of the origins of human intelligence. Can you tell us more about what is termed the 'Great Leap Forward'?
That was the seed for this book. This anthropologic mystery was called 'The Great Leap Forward.' For two-hundred thousand years, human brains haven't changed much; they're basically the same size and shape, but for some reason, about fifty thousand years ago, there was an explosion of art, ingenuity and civilization. That moment has been called 'The Great Leap Forward.'

No one has conclusively determined the cause for that sudden burst of ingenuity and intelligence. One commonly accepted theory is around that time, mankind began migrating out of Africa and was exposed to new threats and challenges, requiring innovation in order to find new ways to survive. There have been other theories, including ones involving changes in diet, and other speculations. At that time, the Neanderthal tribes of Europe and the Middle East began interbreeding with early mankind, and we began to see the influx of Neanderthal DNA into our genome.

Being a veterinarian, I'm familiar with the term hybrid vigor.

It's the phenomenon that occurs when you cross breeds of animals, people included, and what you have is hybridization, resulting in increased intelligence and vigor in the offspring. Anthropologists tell us when hominin DNA entered our genome, it was beneficial. It remains in our DNA, even after thousands of years.

If this hybridization actually happened, I wondered if I could build a story around that phenomenon.

Can you give the readers a thumbnail picture of how this relates to The Bone Labyrinth?
The story starts with the discovery of a cavern system, with elaborate art work on its walls. The discovery of some bones reveals our lineage is far more complicated than was initially thought. Parenthetically, it was recently discovered that another two hominins probably contributed to our DNA. In fact, as I was writing this novel, because of new discoveries, I was forced to tweak the story as more information emerged. The Bone Labyrinth is tied to the fact that there's much more to our genetics than we understand.

So new revelations about the human genome emerged even as you were writing the novel.
Yes. One of the fun things about writing a novel is I get so immersed in research while writing. I always have my ear tuned to the newest findings, so new developments become incorporated into the novel.

In addition to being a riveting story, The Bone Labyrinth delves into archaeology, genetics, paleontology, ancient civilizations, astronomy, history, the Cabala, faith, myth and legend. Your research must have been incredibly extensive.
To me, that's one of the joys of writing a novel. And, it's a trap I have to avoid. When I was writing the book Sandstorm, I kept researching more and more, and finally realized I wasn't writing. I enjoyed the research, but I wasn't being productive. So now, I limit myself to researching for only ninety days. During those ninety days, I build the spine of my story. On the ninety-first day, I begin putting words on paper. For this book, it wasn't only a matter of interviewing different paleontologists and reading current journal articles, I also travelled to China since part of the book takes place there. I like doing that--blending historical mystery with cutting-edge science, and determining if there's a story to be told.

In 'Notes From the Scientific Records' at the beginning of the book, you state, "With the revelations found within these pages, a disturbing questions arises: Are we at the cusp of a second Great Leap Forward? Or are we doomed to fall backward once again?' Will you elaborate on that?
Sure. For the past ten thousand years, the human brain has begun to shrink. The ratio of brain capacity to actual brain size relates to intelligence. So, the question arises: as we drift farther away from hominin species and won't have this beneficial gene pool refreshed, does that mean we're slipping backwards intellectually?

One of the issues in this novel involves someone trying to see if that course can be reversed. Is there a way to increase human intelligence by reintroducing a fresh supply of hominin DNA?

You're an enormously prolific author. Do you ever procrastinate?
Oh yeah. (Laughter).

Given it's a common human tendency, how do you deal with it?
I've always written two books a year. It's a pattern I established and try to maintain. I realized I had to set a goal. I had to have an inherent commitment to myself about my writing. When I was a full-time practicing veterinarian, I committed to writing three double-spaced pages a day. I thought if I ever gave up my day job, I'd be much more productive. And, I am.

I write five double-spaced pages a day. Over time, I've learned that after those pages, I hit a wall. I'm a slow writer. It takes me about an hour to write one double-spaced page. Five pages of fresh writing take five hours. The rest of the day involves editing, polishing, researching or double-checking facts. Of course, Facebook and Twitter require a certain amount of commitment, too.

I work from a skeletal outline which I view as the main tent poles of a novel, but I don't stick to an outline. To me, one of the joys of writing a novel is the discovery of that novel as I'm writing it. Sometimes, I may write my characters into a corner and I get stuck, but that's really a good jam to be in.

What's the most important lesson you've learned about writing?
You know, I still belong to a creative writing group. It's the same one I joined before I was ever published. It's the same core group from when I was first writing short stories. One of the things I've learned is although writing is a solitary profession, eventually, you bring your writing to the world. So one of the important lessons is it's always good to have someone watching your back. I've got twelve first-readers who come from very different aspects of life, and I lean on them to learn how they receive and interpret what I've written. They keep me honest. Sometimes, I'm a little lazy and think, Well, this is good enough. It's satisfactory. If I give the work to the group, they will rake me over the coals. They detect I'm skimming a bit, and they call me on it. They spare nothing. They still remember me from when I was writing lousy short stories, now buried in my backyard, which will hopefully, never see the light of day. (Laughter).

What advice would you give to a beginning writer?
There's the old adage saying you should write every day. The rule of thumb is to expect to write a million words before you will be published. It's not a craft where a neophyte sits down and there's a burst of skill.

I'd add to that: besides writing every day, a writer should read every night. As an avid reader, I see little tricks authors do and like to see if I can do something similar in my next book.

When you're having trouble writing on a given day, when you read another author that night, the little knot in the back of your head begins to untie. Your writerly eye sees what the other author did, and it can be a clue about where to go in your writing.

I think if you write every day and read every night, your prose will become stronger and stronger by both practice and example.

What's coming next from James Rollins?
Coming up next spring or summer is the return of Army Ranger Tucker Wayne and his war dog Kane in War Hawk. And I'm just finishing up next year's Sigma thriller, which is under wraps.

Congratulations on writing The Bone Labyrinth, a novel I view as the most controversial, alarming, and creative of your deeply imagined body of work.