In part one of our interview with The Borgias' David Oakes we talked about what audiences could expect for Juan in the show's upcoming second season. In part two of our interview we discuss with Oakes the other Borgia show, what it's like working with Jeremy Irons, cast pranks and Juan Borgia, the musical.

So how much did you know about the real Juan Borgia before you took the role?
Not much and the funny thing is there's not much really known about him. He died very young and under mysterious circumstances. I did as much research as I could but I think the great thing about having a character that is a historic character but doesn't have too much mentioned about it is that you can make greater artistic choices. I think that if you're Cesare or Lucrezia or Pope Alexander than you have a certain restriction to the deity historical precedent. I, for example, have had a lot more free roam and I think that's what makes his character so much fun, especially this season. I mean there are a lot of events that we've taken from other historical characters but added onto Juan. I mean my character arc this season, I personally think for an actor it's out of the water. So I can't wait to see it all. There's so much that I want to say but I'm not allowed to say yet.

Fair enough. Have you seen the other version of The Borgias, Tom Fontana's version?
I have. Actually Stanley [Weber] who plays Juan and Mark [Ryder] who plays Cesare are friends of mine so I take great interest in seeing what happens with theirs.

It is very different.
It was funny like we were making them simultaneously the first season and there was obviously a lot of trepidation about the comparisons that would be drawn, but I think if anything they kind of complement each other. They're like brother and sister pieces. And for audiences that don't like one aspect of one, you can find it in the other. But I do know there's a very rich tapestry. Well it depends on what people want. I think it's a lot more sexualized theirs from very early on. I think there's room for two Borgias in the world. I don't know if they've been green lit yet for a second season, I think they're still waiting but I think they want to go again.

Yea I'm not sure if they have either. I'm sure they will be though I heard that it did pretty well.
Yea it did very well in Germany and Netflix liked it, I know that much in the States.

Yea that's how I saw it on Netflix instant streaming.
But it's very different; I mean there's no comparison I don't think.

What is it like to work with such a great cast, Jeremy Irons particularly? 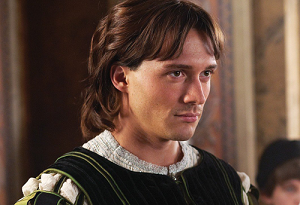 It's amazing! I mean one of the great privileges of my career so far is by doing all these big period epics it draws big characters to it. So you end up with, in this alone, people like Steven Berkoff and Jeremy obliviously. But loads of British theater actors as well like Julian Bleach and Gina McKee and Derek Jacobi in the first season.

Jeremy is a delight to work with. I mean the nature of how my character progresses this season meant that towards the end of the season I spend a lot of time doing two-handed scenes with him, bouncing off him with big dramatic content. I can't honestly think of another actor that I think can handle those big arcs of emotion quite so well as he does. I think he's much more interesting to watch when he's furious or impassioned with romance than he is just sort of sitting on a throne. I love watching him explode and he certainly does that this season.

Are there any pranksters on your set?
[laughs] I have fun. There's a great director John Maybury who was on last season as well and he and I have a lot of fun together. Yea, there's one particular prank that got Jeremy a corker but I can't tell you that without revealing a massive plot point. Yea but me and John played lots of stuff. I think the blooper reel should be a lot better this year. It's funny, last year's blooper reel just seemed like it was every single cast member swearing as much as they possibly could. I think we all toned down our language on set this season just so we didn't seem like such vulgar, vulgar people. But hopefully the blooper reel should be pretty good this year.

You've done a lot of theater, what's the favorite part that you've played and what's the one part you'd really like to that you haven't yet?
The funny thing is on stage I've ended up playing a lot of sort of comedian, comic cowardly-type roles. My careers on stage and screen couldn't differ more highly from each other. I've already played Hamlet a few years back which was astounding, obviously that's the part that all men want to play and want to play again. I mean it's one of those parts where you can find so many different nuances and shapes, so that was fantastic. I think in the future on stage, at some point I really want to do a one-man show. I've seen a lot of one man shows lately and I have so much respect for an actor who can stand on the stage from anywhere between one and three hours and encapsulate a story so perfectly that it never loses the audience's attention. But in terms of perfect roles I don't really have any; I just want to keep doing massively different projects. I want to keep doing a variety that this industry offers up, especially to young actors at the moment. Yea, maybe Juan Borgia the stage show.

Speaking of music I see on Twitter that you're a big music fan so I wanted to ask you what's your favorite genre and then what's your favorite artist?
I have too many to mention. I'm a big folk-y. I like a lot of English folk music, which ranges so massively in terms of the different strands. I can tell you a band I'm listening to a lot at the moment, they're called The Leisure Society and they're really great. They're sort of more folk alternative with a sort of edge of pop I guess. But they did an amazing concert recently at the Barbican in London and they're really worth keeping an eye on. They're great, they're really good.

So just to sum up: if you were trying to pitch somebody on watching next season of The Borgias, what would you tell them?
[laughs] It would depend who I was talking to. I would tell them that if they didn't like the first season than the second season's better. [laughs] And if they didn't watch the first season then watch the first season and there's no way they won't want to watch the second. It's everything that makes television great. It's blood, it's guts, it's gore, it's intrigue, it's characters. This year is really just -- the scripts alone are momentous, they're film-like pieces. I mean I've actually been in a horse race, which is ridiculous for someone my size. Yea it's so worth watching. And it's dark and it's twisted and there's incest if you believe that they're actually going to get it on. And who knows, they might! I don't know!

The Borgias is now available on blu-ray and DVD. Watch out for the second season on Showtime in the spring.