Showtime's drama The Borgias is based on the infamous pope of that name and his even more infamous children. Like all good soapy historical dramas, The Borgias is full of sex, murder, inappropriate sibling relationships and very pretty costumes. Ahead of the release of the first season on blu-ray and DVD on December 27, I spoke with David Oakes, who plays black sheep of the family Juan Borgia. In this first part of a two-part interview we discussed Jeremy Iron's Golden Globe nomination, what's next for Juan in season two and what's really going on with siblings Cesare and Lucrezia.

Well first off I wanted to say congratulations on the Golden Globe nomination. Did you talk to Jeremy Irons after he was nominated?

Funnily enough I did. Yea, we had spoken about it on set a couple of times. He's delighted, he's shocked to bits. Actually I think we all are. I mean it's great that we're getting some kind of awards-based recognition for a show that we already think is good enough in its own right. But yea, it's a great pleasure, a great joy.

Between this [The Borgias] and Pillars of the Earth you've been doing pretty well picking things that get nominated for awards, so you have to feel pretty good about that.

Yea, it's been good. I even actually have an award. That's the amazing thing, like normally you're in shows that do well in award circles but you never actually get to take anything home yourself. But we went to Vienna for the Romy Awards for Pillars and I've actually got a golden lady that sits on my mantelpiece, which is a great delight.

So are you all finished up shooting season two now? 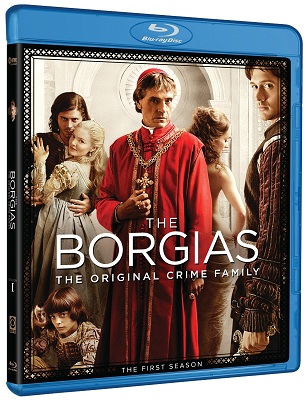 Yup, season two finished about I guess nine days ago now. So I'm back in the UK and eagerly awaiting the second season to come out. It's quite strange preparing to talk about the first season again considering it was well over a year ago we finished that and it's been out for a little while now. But it's nice that it's going to be seen in people's homes on DVD, that's for sure.

So what can you tell us about Juan in season two? What's next for his character?

There's so much coming up! He comes to the forefront of his dreams I guess, he's a lot darker and a lot more manipulative. He's spent the entire first series being picked upon and bullied by the family. Then the second season he's learned what makes them all tick and learnt how to wind them all up and to push them all to breaking point. There's not a single character in the second season that I don't annoy permanently, which ends up in very different ways either in their demise or in other respects. Things I'm not allowed to talk about.

He found himself in sort of a bad place at the end of last season. Has that affected his place in the family in this upcoming season?

Very much so. Yes, especially with his brother and his sister. The rift between them has sort of widened and widened and whereas they're trying to be all mature and get over it, I just start sort of eating away at them and pushing them, seeing if I can make them snap. I think personally from where Juan stands he sees the hypocrisy in the family, how they can do one thing and say another. As far as Juan is concerned he's always had the best interests of the family at heart, however misguided that might be and doesn't quite comprehend why nobody understands that. Nobody seems to understand that what he does, he does for the betterment of the Borgia clan and never waivers from that. He does that in ways that perhaps aren't sanctioned by the church or sanctioned by family law. It's a great character to play, that's for sure.

So does he get any better at poisoning people? Because he was not very good last year.

[laughs] Yea I think the great thing about this character is that that was the first time he'd ever actually had to kill someone, so the reality of it proved quite tricky and quite hard. I think this season you find out that he starts to revel in the ability to have the control of someone's life and death in his own hands. He starts to enjoy torture and manipulation and persecution and murder, even when it includes his loved ones. He gets a bit of a power kick I guess.

Will we see any more of the relationship between him and Sancia?

Unfortunately not. It's of much annoyance to me but Emmanuelle [Chriqui ] wasn't in the second season. The younger member of the family, Joffre [Aiden Alexander] took her off for a rollicking good time on an island somewhere. I'm sure they're having a blast. There are a few omissions. I think that the only real absence this season is Jofre and Sancia. But I wouldn't have minded returning to that character relationship. I rather enjoyed that one.

I can't imagine why.

So do you see Juan as a villainous character or do you just see him as trying to get about things in his own way?

I've kind of got a track record of playing quite nasty people. I've never sort of seen them as bad people. I've always seen them as people trying to reach objectives and sometimes having to do less than savory acts in order to do it. I don't think anything he does -- oh no I was about to lie there, he's completely malicious. He's not a villain, he is misunderstood and wants people to realize that he's actually doing things for the right reasons but by doing that he acts like a child and acts like brute and acts like a bit of a psychopath at times.

The second half of the season, I'm not sure how much of this I can really say, but he returns and gets some of his own medicine inflicted upon him. And so under those situations you suddenly realize the value of life and the consequences of one's actions and the fragility of existence. It's quite interesting to play someone who has flaunted all of that and been so hedonistic and then is forced for a number of reasons to be more alert and more aware of his actions. That's when the real dark side comes out, when he realizes that he can't do the bad things for playful reasons but he can do them for deep, powerful and disgustingly potent reasons.

So you've mentioned that you've played a lot of villainous characters in the past. What attracts you to these kinds of characters? Do you enjoy playing the villain more than the hero?

I think they're more complicated. I think it's very easy to fall in love, what's great fun is convincing people to fall in love with you when you're committing atrocities. And they always just have more fun and they do ridiculous things. I mean on this job, I've been blessed with the ability to do all of my own stunts, so bareback horse riding and having big sword fights with various cast members and cutting people's limbs off and such like. It's been brilliant. I mean what's not to love about that? But that said, one day soon hopefully I will play a nice character, but I'm not sure anyone would believe me if I did that. [laughs]

So you've played a lot of time-period, historical characters too. Is there something that attracts you to these kinds of roles? Is it just that you like to wear the clothes and get on the horses?

I love the horses. I'm a big rider anyway, so that's always a great privilege to be able to sort of go to war on a horse, which is something you can't do in the normal equestrian centers of the modern day world. But it's the fact that the themes are bigger, you know? You get to explore the great themes that have made human society what it is. You get to explore faith and trust and honor, things like that are coming to mean less and less as we move forward in humanity.

Yea and in terms of a family like the Borgias, you have things like incest and hatred and bitterness and jealousy, which come across more palpable when they can live in such high esteem to the rest of the world. If you are the pope or if you are the gonfalonier of the papal army you have got a lot further to fall and so if the brother or sister is trying to make you fall or if a father is not holding you in as much esteem as your position demands than how did that effect it? I mean there are equivalents in the modern-day world, so you have great television that does that. But I think period pieces become great metaphors for great ideas and a great sense of morality I guess.

You mentioned incest briefly. A lot of fans just love the relationship between Cesare and Lucrezia. What do you think of that relationship and will we see more of them in the upcoming season?

I think it's a very fine line. I think Francois [Arnaud] and Holliday [Grainger] play it perfectly. I mean what is incest and are they actually being incestuous or are they just really close? I would say that all that incest is in the audience's mind and they should stop being so filthy. [laughs]

They have a really great chemistry though.

Oh it's beautiful isn't it? I mean they get on so, so well on set and it comes across. I think with the second season you see that built upon. And I think I'm allowed to say now that you see the return of Paolo, Luke Pasqualino. He pops back and so you see Lucrezia's true love come back, who's also the father of the child as well. So there's a whole host of interesting storylines that come through that. Cesare's relationship to Lucrezia is more sort of a lovely, paternal link and then there's my link to that whole relationship, which is sort of less than savory.

I was going to say that I saw the promo that was just released for the second season, and it looked like Juan was not having a very good time with Lucrezia's love life. Does he get involved?

Yea, I think the great thing about this season is that Lucrezia comes home. And so lots of the sort of family drama is centered around Rome. There's a lot of stuff going on outside of Rome with the Sforzas but it's all about what goes on within the family walls, which I think is very exciting. In fact there's a great scene in episode three of season two that Jeremy's not in actually, but it's Joanne [Whalley], myself, Holliday and Francois all talking about the repercussions of a key event that has shook the family. But I really can't say any more about that.

Stay tuned for part two of the interview where we talk about working with Jeremy Irons, cast hijinks and the other version of The Borgias.