A college professor friend of mine once decided to write the least sexy book possible. Lots of academics were trying to be as edgy or trendy and, in keeping with his contrarian personality, he chose to write about insurance in American literature. Those of us working to communicate the impacts of climate change might do well to follow his example.

Environmental groups, including EDF, often focus on the drama of climate change. We do it because we're already seeing some scary changes in the weather -- from severe drought to stronger storms -- and because it's important to give the public a vivid picture of what's happening. But there are limits to that approach. For example, people who are resistant to a message about global warming, or just not interested, will tune out such information, no matter how dramatic the presentation.

Many people don't feel an urgency about climate change because it is such a big and remote issue. Something that is "global" necessarily feels distant. Problems that play out over decades and centuries, that involve predictions about the year 2100, are just not relevant to most people. But the truth is that climate change is starting to touch those everyday, boring things that people do care about -- like insurance rates and taxes and property values. 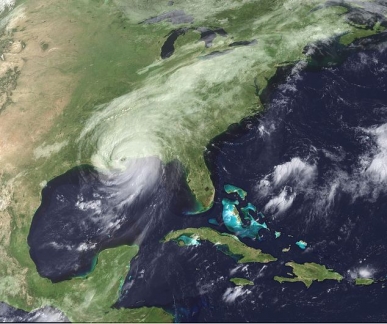 Climate affects your 401(k) and other boring things

Now, boring is not generally a useful attribute in communications. But there are exceptions. You probably take a great interest in such dry and tedious matters as your 401(k) statement, your property tax bill, or changes to the escrow on your mortgage payment. Why? Because they affect your bank account. And it may be that the best way to reach some people is to let them know that climate change, too, is doing just that.

For example, many New York area residents whose homes were severely damaged by Superstorm Sandy have already seen a 25 percent premium increase from the National Flood Insurance Program. The New Orleans Times-Picayune reports that thousands of residents there will face a choice of relocating or seeing increases in their insurance bill of $15,000 to $25,000. And the business group CERES questions whether the insurance industry as a whole is prepared for the financial impacts of climate change.

This is an issue that re-insurance giant Munich Re has been studying for some time. (If there's something more boring than insurance, it's re-insurance. These are the companies that, essentially, insure the insurance companies against their risks and payouts.) The company sees that warming oceans and higher sea levels are causing stronger storms and bigger surges of water around the globe -- which, in turn, causes greater destruction of property and bigger insurance claims. So Munich Re has reasonably concluded that climate change will affect its bottom line. Which means that it will affect your bottom line, as well.

Of course, the effects of climate change are not limited to insurance rates. Municipal budgets have to absorb the cost of infrastructure changes, and recovery costs, associated with extreme weather. Food prices are affected by crop losses due to record droughts. And all of these costs get spread through the economy as the federal government pays for storm damage and recovery, and insurance and food costs are passed along to every one of us. These are issues that hit home to all those voters who don't spend ten seconds a year thinking about the fate of polar bears.

It's our job in the environmental community to open up a line of communication with these people. We need to lay out the boring facts and make the boring case. Let's show those Americans not yet interested in climate change it is going to hit them in the wallet -- whether or not they're interested in the issue. And by acting together, now, we can all save a lot of money...and, as a bonus, our grandchildren will get a healthier and safer world.

This was originally posted on EDF Voices: People on the Planet.