Beginning in February 2013, researchers at the Institute for Immigration Research (IIR) at George Mason University began tracking the national immigration reform conversation on Twitter. Our view was that Twitter would be one of several social media venues where the evolving immigration reform debate could be tracked and analyzed. Since then, using DiscoverText and NodeXL, two different data mining applications, we've collected over 750,000 tweets containing the word "immigration."

The Boston Marathon bombings on April 15, 2013 provided an unexpected opportunity to examine how this event has affected the immigration reform debate. We compared conversations about immigration on Twitter before, during, and after April 15.

Below we provide a series of NodeXL network graphs that illustrates the shifting Twitter conversation. Each visualization depicts the relationships between tweets containing the word "immigration" over the course of a four-hour period. NodeXL not only collects the content of the tweet and the identity of the tweeter, but also who follows whom, who is retweeting whom, and who is having a conversation with whom.

To represent these relationships, NodeXL uses an algorithm to group the tweeters into clusters. Tweeters belonging to the same cluster are highly interconnected; they tend to follow each other, retweet each other's tweets, have conversations with each other, and use similar words in their tweets. Green lines represent connections between tweeters in different clusters, while the text overlaying each cluster represents the most common content among the tweets in that cluster.

Two Weeks Before the Bombing

The first visualization below is typical of what we saw in early April, before the bombing. In the lower right corner, there are small clusters with very few connections to other tweeters. In the lower middle area, there are tweeters who aren't connected to anyone else tweeting about immigration.

Most of the tweeters, however, belong to one of three main clusters. The cluster in the lower left corner is a liberal cluster, as evidenced by some of its most common content (e.g., "timeisnow"). The cluster in the upper right corner is a very conservative cluster dominated by the Tea Party. These two clusters have very few connections between them, indicating that there are very few conversations between their members.

The third cluster, in the upper left corner, includes such diverse tweeters as the RNC, the AFL-CIO, and Bloomberg. It's best described as a mainstream cluster that includes both liberal as well as conservative viewpoints. These tweeters tend not to be as extreme, and they have many connections with the two more ideological clusters, which suggests that this the mainstream cluster acts in part as an informational bridge between them. 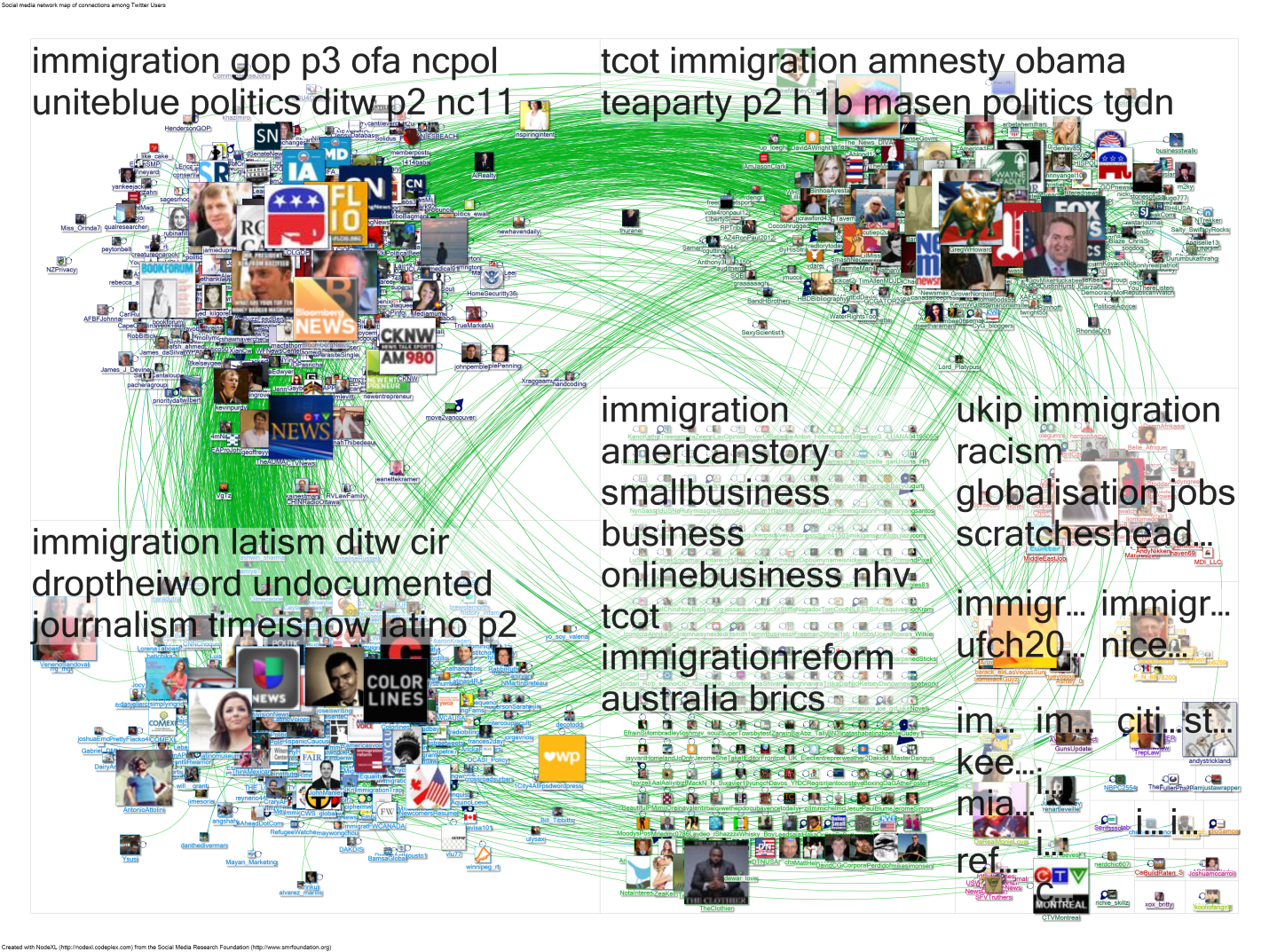 The Day of the Bombing

This visualization, based on tweets collected between 4 and 8 p.m. on April 15, 2013, tells a very different story. Tweeters in all clusters were tweeting about the bombing in relation to immigration -- even though there was not yet any evidence of such a connection. As the left half of the visualization shows, there was a large influx of tweeters who weren't connected to any other immigration tweeters. Words like "deportation," "amnesty," "terrorism," and "borders" point to possible risks associated with immigration seen by these newcomers, as well as moderates and conservatives (lower middle), but not among liberals (upper right).

The Tea Party cluster (middle right) seems to have diminished in size. Tea Partiers on Twitter were still tweeting about immigration, but it appears that more moderate, mainstream tweeters and more conservative tweeters had converged into a single cluster. However, it was unclear at this point whether this change would persist, or whether it was a temporary shift in the conversation. 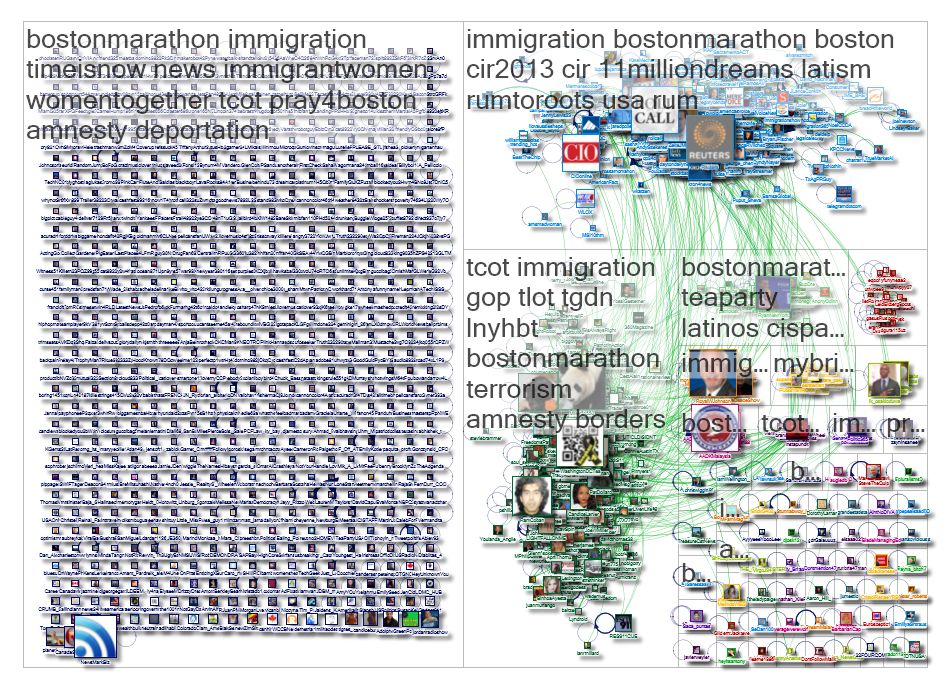 Ten Days After the Bombing

Our evidence suggests that after a temporary deviation in the days immediately following the bombing, the immigration conversation on Twitter has largely returned to its pre-bombing appearance. The visualization below is from April 25, and it shows a decrease in the number of unconnected tweeters (lower left), as well as the reestablishment of a liberal cluster (lower middle), a conservative/Tea Party cluster (upper right), and a bridging, mainstream cluster (upper left). Note, however, that "bostonbomber" is still one of the most frequently used words in conjunction with immigration in the most conservative cluster. On the other hand, the bombing does not appear as prominent in immigration tweets among unconnected, mainstream, and liberal immigration tweeters. 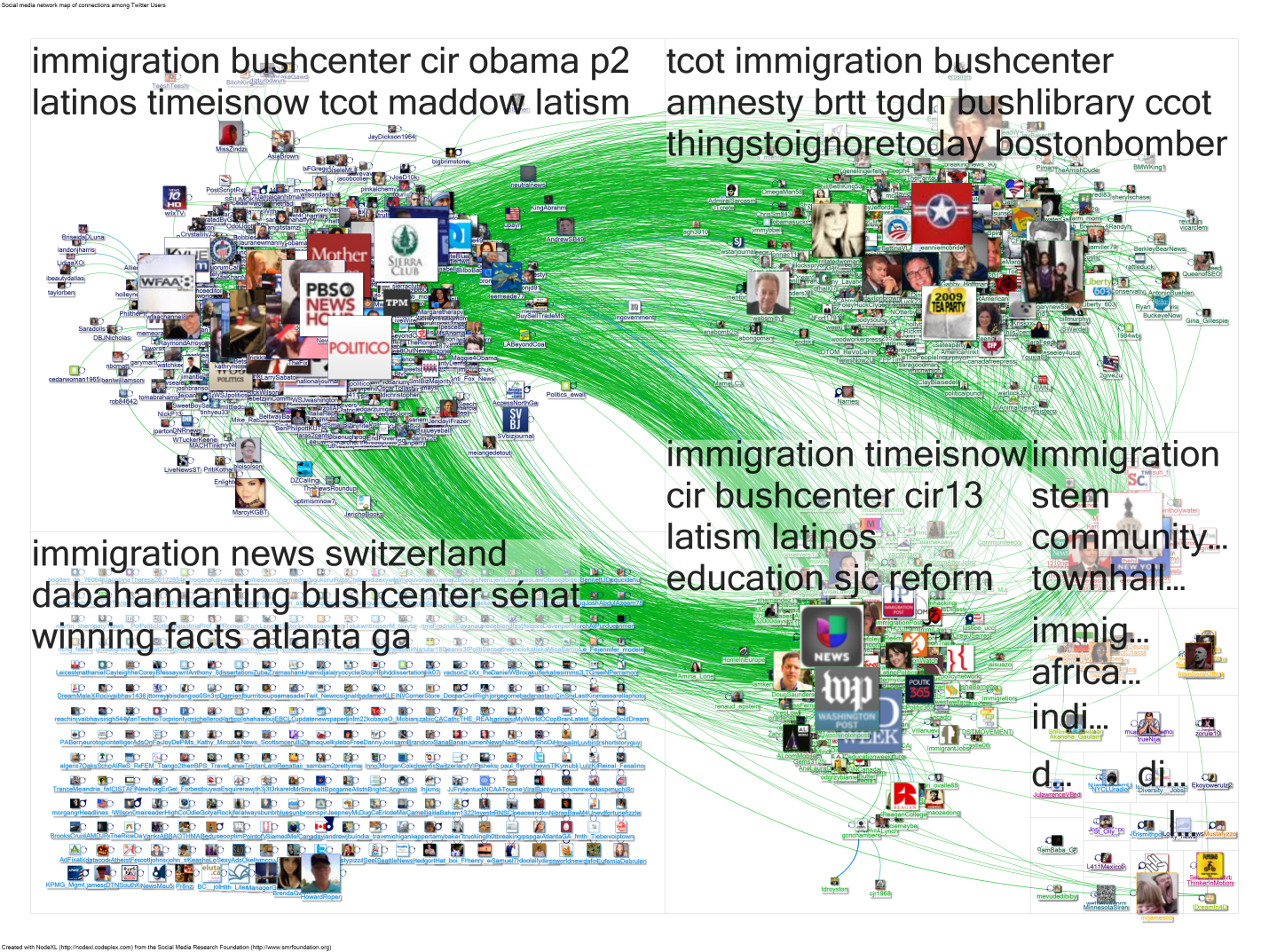 In the mainstream media, the evidence that Chechen immigrants Tamerlan and Dzhokhar Tsarnaev are responsible for the Boston Marathon bombing has led to speculation that comprehensive immigration reform might be delayed, derailed, or even abandoned in Congress. But in the short run, we found no indication that this connection has left a permanent mark on the immigration reform conversation on Twitter. In fact, we found that the immigration conversation quickly returned to patterns similar to those we saw before the bombing.

To the extent that Twitter activity reflects sentiment among influential politicians, journalists, and activists, proponents of comprehensive immigration reform can feel encouraged. On the other hand, conversations on Twitter are not necessarily representative of public opinion. In fact, the Pew Research Center has recently released a study that highlights notable disconnects between public opinion polls and views expressed on Twitter.

As the national conversation on immigration reform continues, so too will our efforts to monitor this debate as it takes place in various venues, including Twitter and other social media forums. Clearly there are many passionate, influential individuals and organizations that regularly tweet about immigration and immigration reform from many varying points of view. Continued analysis of these conversations is important for tracking the progress of immigration reform, but also for better understanding the relationship between social media and public opinion.