Marathons are a funny thing. Why would anyone want to voluntarily put his or her body through so much pain and mental anguish just to run 26.2 miles?

It's easy. The feeling of accomplishment.

A marathon proves that the world is your oyster; that your dreams are limitless; that you can do anything you put your mind to; that mind always conquers matter.

This is especially the case for female runners Bobbi Gibb and Kathrine Switzer.

Before 1972, women were not allowed to run marathons, a sport then deemed unsafe for women. Our patriarchal society believed that such demanding physical activity could cause a woman's uterus to fall out, to grow chest hair or, worst of all, to get big legs. A woman's place was in the home. Period.

In 1966, Gibb ignored these ideas, challenged the status quo, snuck into the Boston Marathon and became the first woman ever to (unofficially) run the world famous race. But she didn't simply just run Boston, she shattered the gender glass ceiling with a time of 3:21:40 -- a time faster than two-thirds of race participants.

"I wanted to show that women can run." -- Bobbi Gibb

Following Gibb's lead, the next year Switzer became the first woman to officially enter the Boston Marathon, registering under her initials K.V. Switzer and making it impossible for race officials to determine her gender. Unlike Gibb's race experience whereby the majority of her fellow runners cheered her on, Switzer's presence in the Boston Marathon was clearly unwelcomed by race officials.

In these now famous photos, race official Jock Semple tries to physically remove Switzer from the race, screaming, "Get the hell out of my race and give me those numbers!"

During the race, journalists repeatedly approached Switzer and asked whether she was making a statement and what she was trying to prove. Shocked at these questions, she only replied, "What? I'm just trying to run."

Although her original goal may have been 'just to run' and she may have believed that her actions would not be newsworthy, after seeing her face plastered on newspapers across the country, she understood it to be quite the opposite:

And it did. A short five years later, in 1972, the Boston Marathon changed its policy and officially allowed women to enter.

On April 21, I am excited to compete in the Boston Marathon. On that Monday morning and on every day before and after, I will be thankful to and inspired by Gibb and Switzer's actions. Running a marathon requires a certain amount of mental toughness, and these change-makers proved to the world that women have more than what it takes. Gibb and Switzer blazed the path for female runners like me and, as a result, nobody besides my family and friends will bat an eye when I run Boston.

And I wouldn't have it any other way. 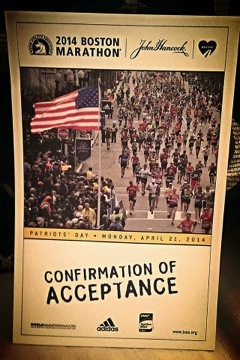