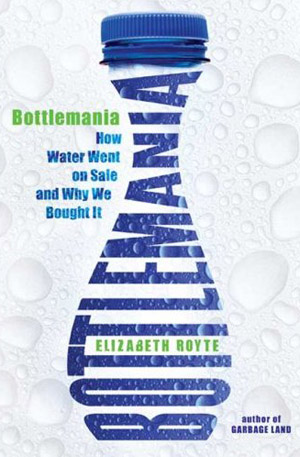 Hey, all you sewer-clogging, turtle-choking, shrub-smothering plastic bags, go jump in a lake! Or an ocean -- where you can be reunited with the rest of your baggy brethren in that swirling vortex of cast-off plastic we call The Great Pacific Garbage Patch. We're just not that into putting things into you, anymore.

Now, if we could only stigmatize your rigid, landfill-lovin' cousin, the plastic water bottle. Because whereas you, my crinkly little symbol of fossil-fueled folly, are destined for history's trash heap (where you will defiantly, proudly, refuse to decompose), bottled water is still socially acceptable, despite the fact that it threatens to poison the very wellspring of our democracy.

A nation that fails to plan intelligently for the development and protection of its precious waters will be condemned to wither because of its shortsightedness.

Well, that would be us; from sea to shining sea, we've taken water for granted while spilling blood for oil, even though water's by far the more precious commodity. As Elizabeth Royte notes (drily?) in her essential new book Bottlemania: How Water Went On Sale And Why We Bought It, "We can live without oil, but we can't live without water."

No kidding, you say. But who's asking us to? Aren't we awash in water, bottled or not?

You might think so, but while our population's rising, lake levels in many states are plummeting and farmers are squabbling with developers over a dwindling water supply because there's just not enough to irrigate all those rows of corn and condos. And some of the water we've got left is contaminated by everything from Agribiz runoff to acid rain to antidepressants. No wonder people worry about whether their tap water's safe to drink, and reach for bottled waters with labels that promise purity.

From a marketing perspective, you couldn't ask for a more ideal product; imagine owning a commodity that literally everybody not only wants, but actually needs, on a daily basis. You'd be sitting on a $60 billion a year industry -- just like the corporations who are in the process of privatizing the world's water supply.

LBJ, who evidently had water on the brain, made this proclamation in 1965 when he signed the Clean Water Act:

Presumably, then, no one has the right to use America's aquifers as a goldmine, either. But, as Bottlemania shows, that's exactly what Nestlé has done in the state of Maine; in 2006, Nestlé sold $843 million worth of Maine's water under its Poland Springs label, according to Royte.

That's an awful lot of water; does it leave enough to keep the citizens of Maine and their municipal water systems sufficiently hydrated? Royte goes to the source, in the little town of Fryeberg, and examines the claims made by locals who fear that Nestlé's depleting their aquifer and damaging its ecosystem.

This scenario's being repeated elsewhere in the country and the world as corporations seek to control more and more of our natural resources. And people have been fighting over water forever; as Royte notes, the word "rival" is derived from the Latin "rivalis," which means "one using the same stream as another."

Royte's investigation into our nation's murky relationship with municipal water also yielded this historical nugget; back in 1799, New York's residents were literally dying for a decent water system. The once-pure creeks and springs of the Algonquin Indians had been so fouled by the Dutch settlers and their livestock that the preferred beverage, even for children, had become beer.

So the New York State legislature awarded Aaron Burr, founder of the Manhattan Company, a two-million-dollar contract to build a water delivery system for the city of New York. But Burr failed to provide them with one, building only twenty-three miles of pipe over the course of the next thirty-two years.

Instead of investing in the infrastructure to give New Yorkers safe drinking water, Burr used the bulk of the funds to found the financial institution which became Chase Manhattan Bank, now known as JPMorgan Chase -- you know, the company that just bailed out Bear Sterns in the wake of the sub-prime mortgage meltdown, with help from the Federal Reserve. So, evidently, diverting taxpayer dollars from public good to private gain -- or, in the case of Bear Stearns, to offset private pain -- is a time-honored tradition in this country.

And speaking of public good, what about the current state of our tap water? The bottled water industry's made a fortune playing on our fears about whether the water that flows from our faucets is really safe despite the fact that tap water is held to a higher standard than bottled. With a few exceptions, as Royte notes, the quality of our tap water's actually quite high.

Plus, because tap water is, essentially, a local product that needs no packaging, it's far kinder to the environment than a petro-dependent bottle of water, which burns through fossil fuels from production to delivery, and then, more often than not, litters our landscape, winding up "crushed flat and gray, ratlike, in the gutters," as Royte describes it. Only a small percentage of single-use water bottles actually gets recycled.

So, from an environmental perspective, tap water's clearly a better bet, but Royte doesn't give it an unequivocal thumbs up. Tap water is, she says, "the devil we know, the devil we have standing with to negotiate and improve."

Of course, Royte acknowledges that bottled water has its uses:

Bottled water does have its place -- it's useful in emergencies and essential for people whose health can't tolerate even filtered water. But it's often no better than tap water, its environmental and social price is high, and it lets our public guardians off the hook for protecting watersheds, stopping polluters, upgrading treatment and distribution infrastructure, and strengthening treatment standards.

Our founding fathers declared that we have an inalienable right to life, and we need water to live, so doesn't our government have an obligation to provide all Americans, regardless of income, with safe drinking water?

At a time when there's less water to go around and more people demanding it, Bottlemania makes the case that it's not in our interests to let private multinational corporations float their boats on our nation's water. That's not democracy, it's dam-ocracy, and it could damn us all if we let their unquenchable thirst for profit take precedence over our right to clean, safe, free drinking water.