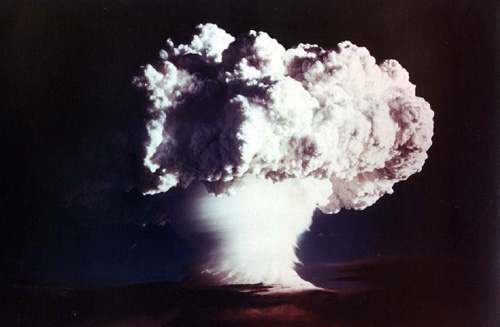 This month marks the 25th anniversary of the summit in Reykjavik, Iceland, where the strident anti-communist President of the United States, Ronald Reagan, met with his Soviet counterpart, the Secretary General of the Communist Party, Mikhail Gorbachev. Instead of an exchange of invectives, they stunned the world with news that the leaders aimed to eliminate all nuclear weapons. Unfortunately, no agreement to this effect had actually been reached.

The fact that it had been discussed was enough to give many around the world hope that the planet was stepping away from the brink of nuclear Armageddon. We've made progress toward that lofty goal since then with global reductions from about 70,000 nuclear weapons to just over 20,000, according to the Federation of American Scientists.

But the world's nine nuclear weapons holders -- the United States, Russia, China, the U.K., France, Pakistan, India, Israel and North Korea -- are on track to shell out a combined $100 billion this year on their nuclear arsenals. This enormous expenditure in the face of global economic uncertainty and rising unmet social needs prompted business, government and policy leaders gathered for the Global Zero Summit at the Ronald Reagan Presidential Library to say we can no longer afford the cost of nuclear weapons.

"We (the United States) spend about $55 billion a year on nuclear weapons," said Lawrence Korb, a Senior Fellow at the Center for American Progress, a progressive think tank. "Over the next ten years we'll spend $600 billion," including $85 billion for the national weapons labs that was "essentially a bribe" to Republican Senator John Kyl for his support of START (Strategic Arms Reduction Treaty).

According to Korb, a recent Air War College study concluded, "all we need are 311 nuclear weapons for a deterrent" yet the U.S. maintains an arsenal of over 1500 warheads. If we reduced our arsenal to that level, "we could cut what we spend on nuclear weapons by two thirds," said Korb, and we "wouldn't need any new submarines or bombers."

He and others believe substantial cuts can be made without endangering our safety and that this would increase the moral authority of the United States while diminishing the threat of proliferation. 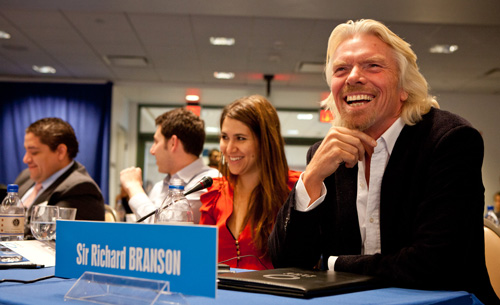 Of course, the "nuclear priesthood would not like it," said Korb. But more and more business leaders like Richard Branson, founder of the Virgin Group, see the need to shift our priorities recognizing that we can't have it all or do it all.

"If we retain the focus on Cold War relics our children will grow up without clean energy," said Branson at the Global Zero Summit. "If nations are looking for places to cut spending this is the first place to look."

Branson ticked off a list of other priorities for countries to pursue instead of nuclear weapons including a shift to funding new energy sources, high speed rail, cleaning up coal plants and energy efficiency.

"The public is on our side," he said. "The government needs to reset their priorities." Stressing the urgency of these decisions he pointed out, "there is no planet B." 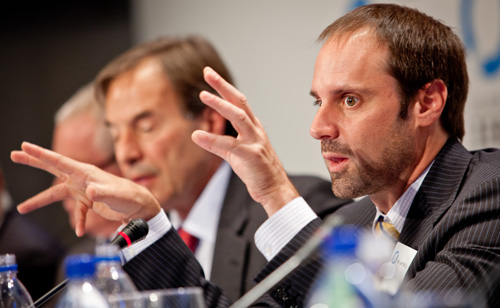 The founder of eBay, Jeff Skoll, joined Branson's call to cut our spending on nuclear weapons. "As a businessman and an entrepreneur, I'm appalled that so much is going to waste," said Skoll.

"If the United States were to cut nuclear weapons budget in half we could produce millions of new jobs and produce revenue," that would reduce the deficit he said, "versus creating things that will devastate the world."

We could also, "educate all the girls in Africa," said Skoll and "lift millions out of poverty."

Attendees recognized that zeroing out or even reducing the world's nuclear arsenals needs to be a bipartisan and global effort. "It can't just be an American, Russian or Chinese initiative," said Ambassador Richard Burt, who was the chief negotiator for the Strategic Arms Reduction Treaty (START) and now chairs Global Zero.

The former Pakistan ambassador to the United States, Mahmud Durrani, wasn't convinced talking about cost was the best path to pursue. He pointed out that Pakistan has been able to develop its nuclear arsenal on the cheap and that it's able to maintain it for about, "half a billion dollars," a year. "This would not even be half a percent of $100 billion being spent by the nine nuclear states," said Durrani. If Pakistan's nuclear arms budget "were to be diverted to Pakistan's development budget, it would increase the development budget by a mere 0.2 percent."

Durrani acknowledged that half a billion US dollars is not petty cash but he wanted to show that even a "cash strapped country like Pakistan can afford such an amount if they felt their life depended on it."

He suggested that nuclear abolitionists instead focus on "the horrors of a nuclear blast unleashed even by one modern high yield thermonuclear weapon. We need to focus on the human and material cost of a single nuclear weapon in the hands of terrorists. Or even the destruction caused by one nuclear bomb released by misjudgment or an accident."

Durrani argued that advocates need to make their arguments more personal and less global. "The impact of a nuclear war will be understood when a Pakistan and an Indian farmer understand that a land cultivated by his father, his grandfather and earlier generations cannot be cultivated today by his children and grandchildren; and not for many decades to come," because of lingering radiation said Durrani.

"The cost issue can be only part of our rationale," said Burt. Reducing nuclear weapons needs to be seen as "a strong, realistic and pragmatic component to good policy."

In the end, nuclear weapons are the not the solution to the new and varied problems we face, to terrorism, to failing states," said Burt.

It's going to take more than a room full of policy wonks to get to zero and do the groundwork for a more peaceful planet but as President Eisenhower told Prime Minister Macmillan, "I think that people want peace so much that one of these days governments had better get out of the way and let them have it."

If you agree, Global Zero has a petition you can sign.