For businesses dependent on high foot traffic, location is everything. It's much the same out on the water, where finding the right spot can make all the difference for commercial and recreational fishermen alike.

Advances in technology make it easier to target fish more quickly, in deeper water, and more precisely than ever before. This puts new pressures on bottom-dwelling fish that congregate and reproduce only at certain ecological hot spots along the edge of the U.S. continental shelf. 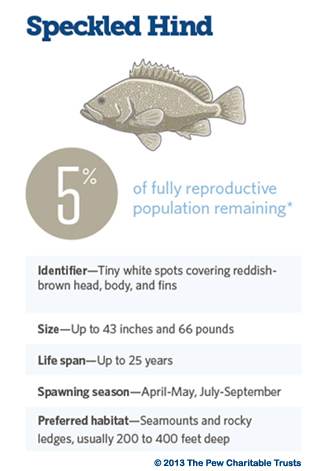 But new technologies also allow us to better understand how marine ecosystems work, giving us the ability to map key spawning areas for marine life. Using these maps, the South Atlantic Fishery Management Council recently proposed protections of places where two severely depleted deep-water species--speckled hind and warsaw grouper--live and spawn. An important next step comes in December, when council members are expected to settle on a list of potential marine protected areas that will be the subject of public hearings early next year.

At first glance, speckled hind and warsaw grouper wouldn't seem to have much in common. The reddish-orange speckled hind, found in waters from North Carolina to the Florida Keys, gets its name from the tiny white spots that cover it from head to tail. Adults can grow to 43 inches and weigh as much as 66 pounds. The warsaw grouper, in contrast, is much bigger: It is one of the largest members of the grouper family. This solitary fish--found from Massachusetts to South America--can grow to eight feet and weigh more than 400 pounds.

Yet despite their distinct differences in appearance and range, these two species share two important ecological traits. They both congregate, feed, and reproduce in deep, rocky offshore areas that can be popular fishing holes. And both species are slow to reach maturity and spawn. This combination makes them especially vulnerable to overfishing.

Rules limiting the catch of warsaw grouper and speckled hind have been in place since 1994, but unfortunately these fish tend to prefer habitat frequented by popular sport and commercial species. As fishermen pursue these more desirable fish--such as vermilion snapper and red porgy--they can accidentally catch the warsaw grouper and speckled hind. This is a problem known as bycatch. 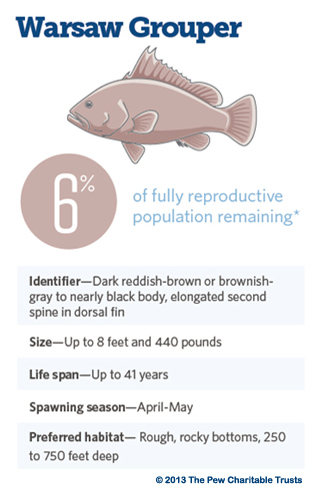 Moreover, when speckled hind or warsaw grouper are unintentionally caught and quickly pulled to the surface, the rapid change in pressure often causes fatal internal injuries, even if they are immediately released. Such occurrences worsen an already dire situation for these two species.

Although the catch of speckled hind and warsaw grouper has been restricted for 20 years, researchers say the populations have plummeted in the Atlantic waters off the southern U.S., to 6 percent of healthy levels for warsaw grouper and 5 percent for speckled hind. Both species are listed as "Critically Endangered" by the International Union for Conservation of Nature and as "Species of Concern" by the National Oceanic and Atmospheric Administration's Fisheries Service.

To more effectively protect the primary locations where these species live and spawn, the South Atlantic Fishery Management Council is now are considering how to redraw eight marine protected areas--roughly 785 square miles--along the edge of the continental shelf from North Carolina to Florida. The areas are currently off limits to deep-water fishing but only protect a small portion of the habitat these species need to recover. The council also is weighing creating new sites--totaling an additional 308 square miles--to protect these two bottom dwellers while benefiting other species, including red snapper and red grouper, that are recovering from decades of overfishing.

Fishermen have worked for ages to find the best spots to fish. New technologies have made the process easier, leaving fewer places for imperiled fish to hide. But these advances also provide an opportunity to improve conservation. If used wisely, new science and tools can help federal fisheries managers better protect the real estate that seriously depleted ocean fish populations, such as warsaw grouper and speckled hind, need to recover to healthy levels.

Show your support for these imperiled fish and the plan to save them.