My 8-year-old son Lucas began nagging us about buying fireworks the second he realized the 4th of July was imminent. So... in May. My husband and I told him again and again that it was wayyyy too soon to buy fireworks and that we'd buy them closer to the actual date.

Then we received a catalog in the mail advertising a buy-one-get-one sale on fireworks just down the road from our house. Lucas gravitated towards it like a planet to a black hole and immediately lost his mind with delight. He carefully crafted a shopping list, mindfully avoiding big-ticket items like the giant pre-wrapped packages they sell for $300 so as to improve his chances of actually getting what he wanted.

But it was still only the beginning of June. My husband and I both did our best to explain to him that it was still too early and he needed to be patient. But his incessant nagging got to the point that I had to threaten him that if he asked one more time, there would be no fireworks this year.

He obeyed, but it was obviously painful for him. He paced back and forth on the edge of my peripheral vision and circled the kitchen island lost in thought, clearly racking his brain trying to come up with ways to ask "can we buy fireworks now???" without actually using the word "fireworks."

At some point, my husband made the mistake of telling Lucas that maybe we would go fireworks-shopping that coming Sunday. That would have put us at June 15th -- still pretty early for fireworks acquisition. But when Sunday came, my husband ended up having to work from home all day and was forced to brush Lucas off... sending him to me.

But I was busy too, doing household chores. So when Lucas asked if I could take him fireworks-shopping, I brushed him off just as his father had done. Again I reminded him that we still had plenty of time; there were still nearly three weeks until the 4th of July. When he whined that my husband had "promised" to take him, I finally snapped at him and told him to go to his room, that I was sick of hearing about the stupid fireworks. I said he was acting spoiled and ordered him not to say another word about it.

About 15 minutes after Lucas had retreated to his room, my 4-year-old daughter, Mari, appeared with a delivery for me. It was a note from Lucas, accompanied by a drawing he had done: 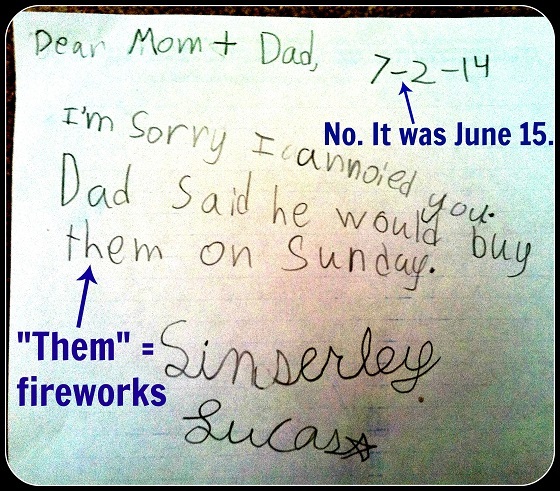 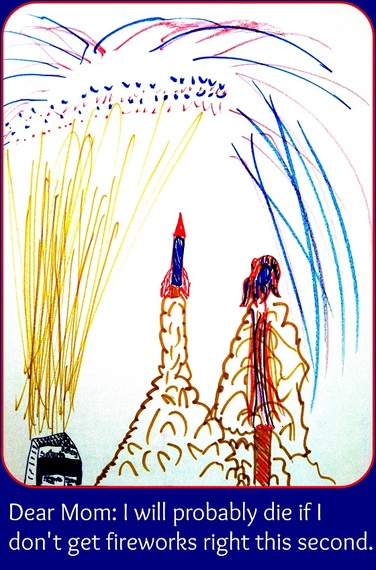 I read his sweet letter and my gut twisted with guilt over pushing him off so harshly. Mari returned to Lucas' room, and I heard him whisper, "Did you give it to her?"

"She didn't say anything yet."

When he came down the stairs he was crying silently and looking very nervous. Eyes downcast, he clasped and unclasped his little-boy fingers. I had been ready to give him yet another lecture on patience, but then, like a freight train, it hit me: Lucas' impatience over the fireworks wasn't about being spoiled or materialistic; it was about boyhood enthusiasm. That beautiful, heart-filling anticipation that only children are capable of experiencing to its fullest. That feeling is one of those irretrievable childhood joys that we tend to outgrow as the cynicism of adulthood takes over. Lucas had been dreaming of loud bangs and colors filling the sky, and I'd been snarling at him and sending him to his room. I pulled him in for a hug and felt his bony little shoulders heave with relief that he might finally be understood.

"Get your shoes on," I whispered into his ear. "We're going to go buy some fireworks."