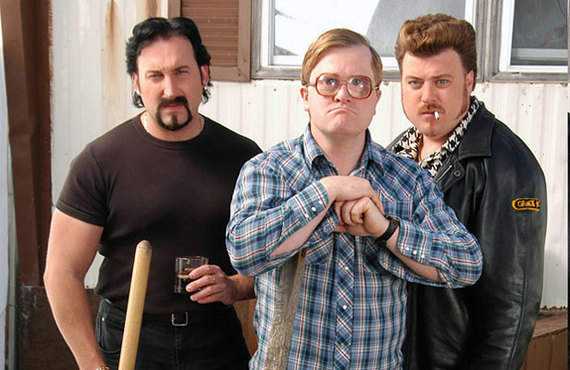 I have a guilty pleasure. Yes, I feel really guilty about it, and it's really pleasurable. I'm also late to the party by about 14 years, so I'll apologize for that in advance.

Six months ago, a friend at a book reading told me had been binge-watching a Canadian comedy series on Netflix called Trailer Park Boys. It was about to release its eighth season and I had never even heard of it. And I watch a lot of television. So I went home and dug up a stream of the very first episode, which hooked me immediately. I blew through that season and then Season 2, which was shot so long ago it featured a 14-year-old Ellen Page as the park supervisor's daughter.

Last week, I finished watching the 65th episode. Needless to say, I am in love with Trailer Park Boys.

Created, written and directed by Halifax native Mike Clattenburg for its first seven seasons, the show is a mockumentary on the residents of fictional Sunnyvale Trailer Park in Dartmouth, Nova Scotia. In the R-rated ensemble tradition of Reno 911 and It's Always Sunny in Philadelphia, Trailer Park Boys is an addictive study in chronic stupidity and chaos in a close-knit, for-better-or-worse community.The characters never fail to get out of their own way and a few of them are hilariously crude, but all of them are endearing, and before long you find yourself binge-watching another episode just to see how the trailer park train will wreck.

Let's start with Ricky (Robb Wells) and Julian (John Paul Tremblay), the small-time criminals who end up back in jail at the end of each season and hatch the shenanigans that get them in trouble. Ricky, with his '50s pompadour, pointy sideburns, goatee, bedroom eyes and wide girth, could possibly be the dumbest, rudest bastard I've ever seen on TV, but he's so pathetic you find yourself caring about him. When he isn't bumming cigarettes, telling people to fuck off, getting stoned and drunk practically all day every day and mangling the English language ("Honesty is just a test policy," "It doesn't take rocket appliances," and "Worst case Ontario" ), he's living in his car and clearing the junk off the top of it with a hockey stick, trying wholeheartedly to pass the 10th grade, and trying anything to make a buck and support his daughter Trinity and saucy ex-wife Lucy. He alternates in the moment between being remorseful and totally clueless. He is just an amazing comedy creation.

Julian, the "brains" of the outfit, is much more of a straight man, but also has his comic quirks, especially the glass of rum and coke that never ever leaves his hand. Much more grounded in the real world than Ricky, Julian still can't seem to ditch his illegal schemes, despite frequently admitting he wants to, and much of the trouble they find themselves in is a result of his hair-brained ideas.

But then there's Bubbles. Oh my yes, Bubbles. If Ricky is a comedy creation, then Bubbles is a priceless goofy Rembrandt. Played by Mike Smith, who in interviews doesn't look or sound anything like his character, Bubbles is Ricky and Julian's virginal boy-man friend in coke bottle glasses who is happy living in a shed with his kitties; who drives a go-kart into town; who steals shopping carts en masse from the local supermarket to sell the parts; who has a hand puppet alter ego; who receives a 1990s portable phone with an antenna and thinks it's the latest in technology. Bubbles' feelings are so bottled up he speaks and gestures in a stiff, semi-retarded fashion and seems like he's going to pop, yet in his own way is the wisest, sweetest, and sanest resident of the park.

For villains, we have another colorful assortment, first and foremost park supervisor and ex-cop Jim Leahy (John Dunsworth), a roaring drunk blowhard and closet gay man who is forever trying to get Ricky and Julian booted from the park. Leahy's partner in supervising and late-night dress-up parties is Randy (Patrick Roach), a cheeseburger-eating buffoon with a basketball-sized gut who for a reason that is never explained, goes shirtless 24 hours a day.

Throw in Cory and Trevor, two younger fools who idolize Ricky and Julian and get treated like dogs in return, Jonathan Torrens as J-Roc, a white guy desperately wanting to be a black rapper (He says "Know what I'm sayin'?" after everything he says.), Barrie Dunn as Ricky's loser father and disability fraud candidate Ray, local hood Cyrus (Bernard Robichaud) and Sam Tarasco as all-around park schmuck Sam Losco and you have more than enough daily mirth and conflict to go around.

Each episode is only about 23 minutes, and the plots follow a spiraling, complicating pattern prevalent in all classic situational comedy. Here's a summation from Wikipedia on "Friends of the Road" from Season 7:

Ray and Bubbles travel to Maine to recycle shopping carts and attend a model train convention where they could meet heavy-metal singer Sebastian Bach. However, Ray gets busted for soliciting an undercover cop, leaving Bubbles stranded in a phone booth at a Bangor truck-stop. Ricky and Julian travel to Maine to pick up Bubbles, who suffers a mental breakdown and steals Patrick Swayze's model train, "The Swayzie Express."

The next episode features the genius idea of Julian using this model train to smuggle marijuana into Maine by laying the tracks through the woods and through a tube under a river. As you would imagine, it doesn't quite work.

After discovering that Ricky has been committing credit-card fraud in his name, Julian panics and leaves the trailer park for a while. Meanwhile, Randy resorts to prostitution to fund his cheeseburger addiction. Julian eventually returns and Ricky reveals that he has planted four fields of enormous marijuana plants. Faced with the prospect of so much drug money, Julian declares that they will buy Sunnyvale itself.

Granted, the show is not for everyone, but the occasional crudity is brush-stroked with a sweet summer innocence, perfectly captured in the gentle, piano laced theme song and sepia shots of the park in the opening credits that more than anything, bring to mind One Flew Over the Cuckoo's Nest's "medication time."

Creator Mike Clattenburg sold his rights to Trailer Park Boys to Wells, Tremblay and Smith and left the show following Season 7. Season 8 was directed by different people and was obviously filmed much later because Tremblay seems to have gained a few years and 20 pounds. Many of these most recent episodes were a little more clunky, but I have faith that any future ones will recapture the crisp zaniness of earlier years.

There are also three movie version of the boys I have yet to see: The Movie, Countdown to Liquor Day and Don't Legalize It, and Clattenburg has since gone on to co-create the current controversial comedy Black Jesus for the Adult Swim network.

Most likely, not being plugged into popular Canadian culture is why Trailer Park Boys ended up spilling onto my iPad like a flash glacial flood. When I lived up in Vermont years ago, I became a huge fan of SCTV and always preferred it to Saturday Night Live, so the joys of Trailer Park Boys were not exactly unexpected.

But now there's work to do. Hardly anyone I've mentioned the show to out here in L.A. has even heard of it, so it's my job to get the word out to as many fellow countrymen as I can. Or as the immortal Ricky would say, "Good things come to those at the gate."

Jeff Polman writes about baseball for various Internet publications and writes "fictionalized" historical replay novels. Ball Nuts, his latest one, is available on Amazon and Mystery Ball '58 will be close behind.