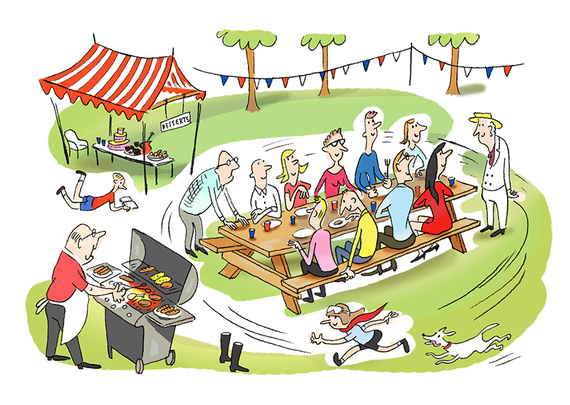 Memorial Day always ends with a barbecue. The aromas of burning hamburgers cover the land like a smoky blanket.

I'm in a backyard where my host is juggling sausages on his grill, when my neighbor suddenly says to me, "It is unfortunate that so few people these days think of the veterans now. Memorial Day and Independence Day are bursting with parades and patriotism, yet they should be a moment of quiet reflection."

We understand this better in Holland: wreaths and ribbons on Remembrance Day, flags and streamers on Liberation Day.

My neighbor suddenly stands and taps his glass. "I would like your attention for the veterans in our midst," he says. People look down, awkwardly, at the paper plates in their hands. "Technically, I am a veteran, but thanks to my father, I served in the U.S. and never went to Vietnam. A father who saw me for the first time when he returned from World War II."

He asks that we give a toast to two "real veterans" I see talking together over in a corner of a party. Both are vigorous men in their 90s and professors of literature at Princeton University. As a farm boy in the Midwest, Sam Hynes always dreamed to learning to fly. While other kids were playing tag on the playground, he ran around with his arms wide, imitating the legendary Red Baron. In winter, when everyone wore a wool hat, he walked into school wearing a leather aviator helmet with goggles. Later he flew dozens of missions in a torpedo bomber against the Japanese in the Pacific, hopping from island to island.

The other veteran, Victor Brombert is immaculately dressed in a white suit and straw hat, all topped with a colorful ascot. He acknowledges the applause with a solemn nod.

Victor's life seems to contain all the threads of the 20th century. He was born in 1923 in Berlin, in a wealthy Russian-Jewish family who had fled just before the Revolution. The family fled again when Hitler came to power, first to Vichy, then via Spain to America. There, the young Victor was drafted into the U.S. Army. Because he spoke fluent German, he became one of the so-called Ritchie Boys -- European refugees who could interrogate German prisoners. By June 6, 1944 he was back in France, now on the sands of Omaha Beach.

"You have to imagine," he says with a heavy French accent, "I was such a child who always had his nose in the books. My head was full of Tolstoy, Stendhal and Flaubert. I knew whole passages by heart and dreamed to be a writer. And suddenly I was on the beach, among all the blood and mud. And the dead. "

"What was the first thing you did?" I ask.

"I polished my boots," he says. "The other soldiers laughed at me and asked if I was crazy. Who polished muddy boots on a beach in the middle of a war? "

He adjusts his ascot. "We all have our ways to survive in crazy situations," he says. "For me, it came down to self-discipline. My grandmother taught me that. Self-discipline starts at the bottom. With your shoes. "

It's time for dessert. We get up and walk to a large bowl with cookies festooned with American flags.

"My grandmother caught me once when I grabbed a cookie from the box," he says. "She scolded me and told me to always ask before taking. I was a clever boy, so I asked, "But what if no one else is in the room?" Ah, she said, "When you are alone, that's when it's most important to ask."