Fill in the blank.

On a Friday night, I am usually...

B) Meeting with my Sanskrit discussion group for tea and conversation.

If you picked B, there are many many colleges for you to choose from.

Unigo recently ranked the brainiest colleges in the nation. Here are colleges where you can discuss Derrida on dorm steps, and truly be subsumed in a culture of learning.

Check out our slide show of the schools below. Did we miss any? Weigh in below! 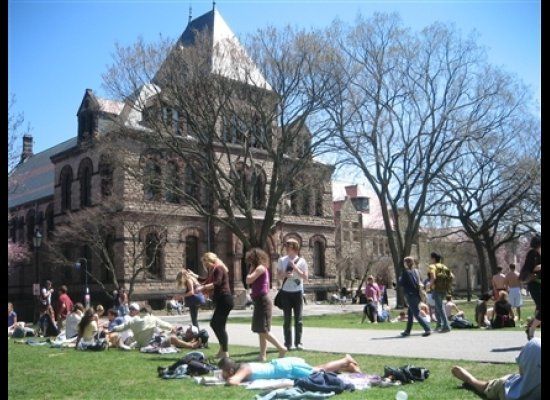 1 / 10
Brown University
If all of the Ivy League schools came to your house for Thanksgiving dinner, <a href="http://www.unigo.com/brown_university/" target="_hplink">Brown</a> would be the cool uncle wearing a Miles Davis t-shirt who carries an unidentifiable odor but ends up being really well-spoken and interesting. BU gets its reputation as the "weird Ivy" due partially to its open curriculum and progressive grading system. "With the open curriculum, you can take any class you want to, which is really cool, because I've taken a class called Ancient Utopias and Imaginary Places at the same time as I was <a href="http://www.unigo.com/Brown_University/Reviews/4415/ " target="_hplink">taking Organic Chemistry</a>," says Gregory, a freshman at Brown. Stephanie, and English major has this to say about the benefits of Brown's open curriculum: "Interested and engaged students foster deeper, more involved discussions and, in my opinion, an overall more fulfilling academic experience... learning for its own sake -- <a href="http://www.unigo.com/Brown_University/Reviews/9607/ " target="_hplink">not getting a job</a>."
Wesley, Freshman, Brown University