It's the worst four words any parent could hear when their child is painfully sick: "THERE IS NO CURE."

Brayden Underhill of Wisconsin was three years old when he had his second clubfoot surgery. Sheena Buffington, Brayden's mother, noticed odd symptoms following his period of recovery. Brayden's feet were unbearably hot to a point she began using a fan to cool them down. If he stood barefooted on a cold cement floor it helped sometimes.

His symptoms rapidly progressed to where he felt like he was living inside a scorching fire. His mother felt desperate to relieve his agony, so she began short sessions of soaking his legs in an ice-filled cooler. 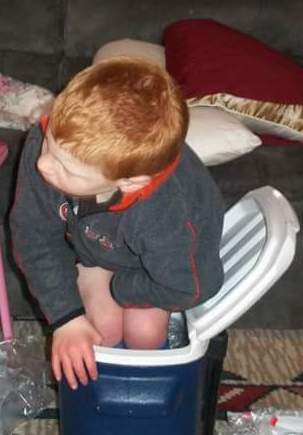 They visited numerous doctors, but none could provide answers for his unusual, incapacitating symptoms.

Eventually, the frequent ice immersions caused swelling and deep lacerations all over his lower legs and feet. Brayden was hospitalized, and crippled in pain beyond words. 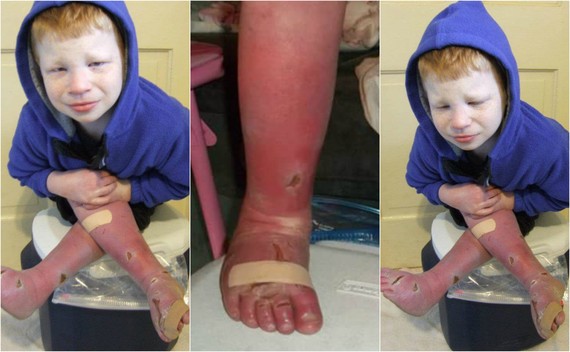 "The pictures still make me cry every time I look at them," his mother said.

The family continued visiting different physicians but no one knew what was it was, or how to treat it. Sheena spent hundreds of frantic hours on the internet trying to diagnose her son's condition. Brayden would have to wait two more grueling years for a diagnosis.

"I was so frustrated, and I couldn't stand seeing my child in such pain. I wanted answers, and I wanted it treated fast," Sheena recalls. 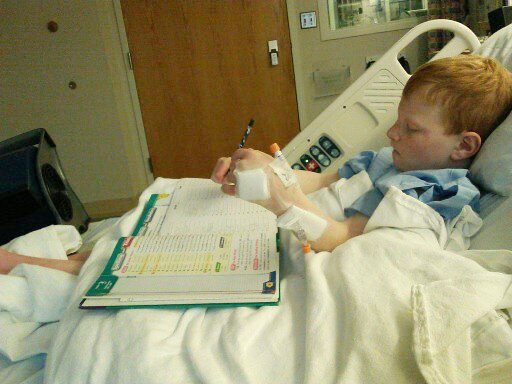 Finally, after several long-distant excursions to and from the Mayo Clinic in Rochester, Minnesota, a dermatologist gave them the devastating news. Brayden had a rare disease called Erythromelalgia (EM). It affects 1.3 in 100,000 people, and there is no cure.

EM causes severe burning pain, evident redness of the skin, swelling, and increased skin temperature. The exact underlying cause remains unknown. However, it's thought to result from vasomotor abnormalities or dysfunction in the normal constriction and dilation of the caliber of certain blood vessels, leading to abnormalities of blood flow to the extremities.

There isn't a standard treatment for EM, and sometimes nothing helps. Brayden has tried a bunch of different medications, and dealt with horrendous side effects. Some of the prescriptions actually made the EM more painful.

Since the age of 3, Brayden has averaged about four hours of sleep a night (confirmed through a sleep study). He sleeps bent over the bed with his feet hanging off so he can feel the fan's breeze on his legs. He often wakes up in the middle of the night, struggling with pain.

Eight years later, 11-year-old Brayden still lives with crippling, chronic pain. His disease has progressed to his legs (from the knee on down), hands, ears, nose, and cheeks. He feels like he is burning alive. He uses a fan almost 24 hours a day, and cannot tolerate shoes or socks. 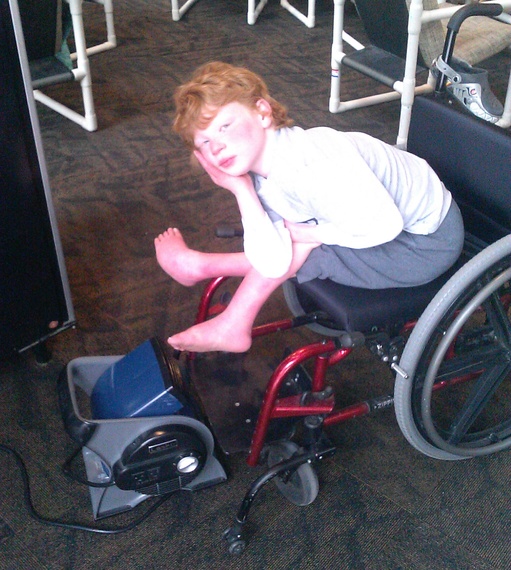 Brayden is in the 6th grade, and still manages to attend a public school with the help of his wheelchair and a portable fan he keeps near his feet. His mother debates having him home schooled because she feels it's so important for him to be around other children. The school system has worked with his parents in making adjustments for his physical limitations.

"He has come home from school, feeling sad after watching his friends play football or basketball, knowing he can't participate," his mother said with sorrow.

Brayden describes his intense burning as "feeling like my body is crying inside."

He finds some small relief by crossing his legs and pulling them tightly against his chest. However, his physical therapist has discouraged him from doing this because overtime it could permanently weaken his posture and muscle integrity. 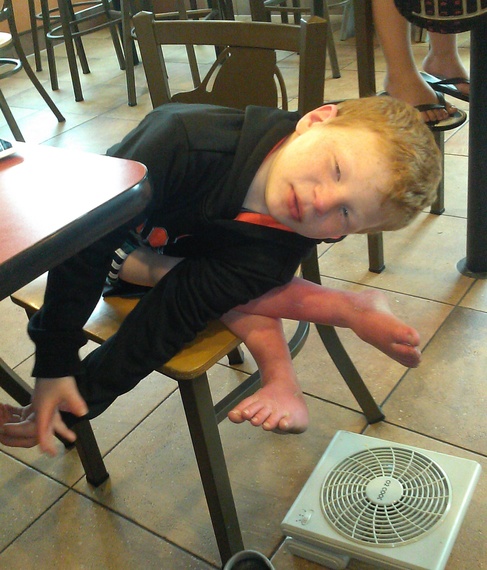 "After you get over being mad, and frustrated that no doctor can help him, we realized we needed to live with this. We try to come up with different ways to do things."

Brayden has anxiety about leaving the house because he worries how his limbs will behave.

One time his family drove two hours to the zoo when Brayden overheated, and within 10 minutes he was in dire need of cooling packs and cold wet towels. Those methods didn't provide any relief so they tried their vehicle's air conditioning, which also didn't work. They ended up having to leave. 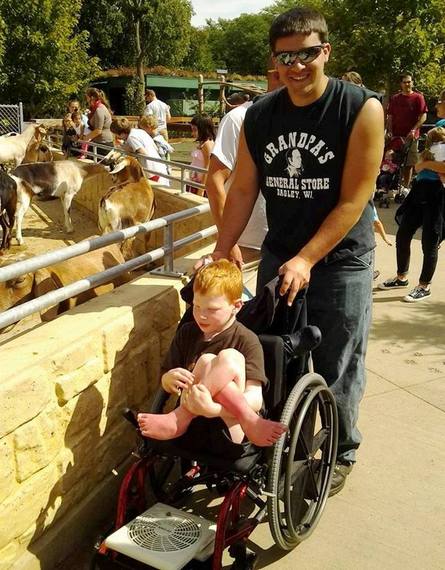 "Every day I wish I could make all of this all go away so he can live a normal life," his mother said.

He currently sees a pain specialist, neurologist, and pediatrician. Most often, he sees the pain management doctor.

Distraction is key when it comes to Brayden's physical and mental survival. He enjoys playing games on his Xbox, and watching movies and YouTube videos. His favorite action hero is Batman. Occasionally he'll have a friend over, and might try to play outside for 30 minutes if it's cool or cloudy.

Strangers have called the police claiming child abuse, after seeing Brayden's parents carrying him outside barefooted during winter months. On another occasion, authorities were called while Brayden and his family were dining together in a restaurant, again assuming he had been a victim of child abuse. His parents requested a doctor's note to avoid such encounters in the future. 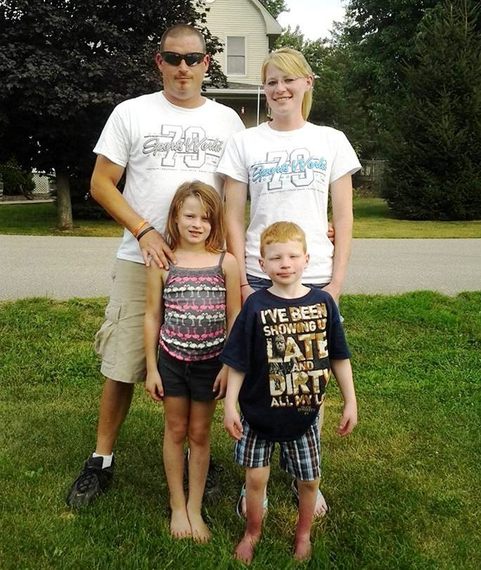 "Coping as a family has been incredibly hard, but every day we learn, and try to find ways to accommodate Brayden's needs," Sheena said.

Brayden and his family have learned to deal with the constant staring and comments from strangers. Typical remarks include: "Wow, you're really sunburned," or "Did your legs get burned in a fire?"

He's embarrassed to be seen in his wheelchair so he only ventures to the local department store about twice a year.

His mother would love it if others could show Brayden their support, so that he doesn't feel so alone in the world. Perhaps people could share a photo or words of encouragement on their personal social media account with "#BraydentheBrave" to let him know people do care, and it's okay to enter a department store with a physical disability. 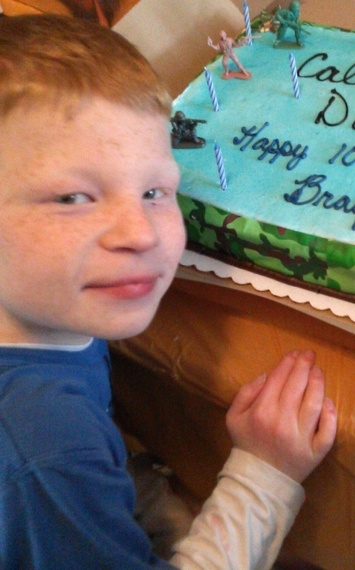 To view this blog on my personal blog site:
https://melissaannsite.wordpress.com/2016/05/04/the-boy-trapped-inside-a-fire/

More:
healthy livingrare diseaseschronic illnesserythromelalgiapain
Newsletter Sign Up
The Morning Email
Wake up to the day's most important news.
Successfully Subscribed!
Realness delivered to your inbox