Nadiya Savchenko sits behind bars in a Russian prison, the prospect of a 23-year sentence looming before her. The strength of this Ukrainian woman is being lauded internationally as she fights against her charges, but it's not really that surprising. Ukrainian women hold a long history of bravery.

Throughout its rich history, Ukraine has known many years of oppression. The current tensions with Russia aren't new to Ukraine. In fact, war has long been a constant, a given, regardless if the outside world notices or not.

Years ago, in an effort to understand more about this often oppressed country, I traveled to Ukraine to interview World War II veterans. It was there that I met Elizabeth Yepifanova, and the face of bravery forever changed for me. 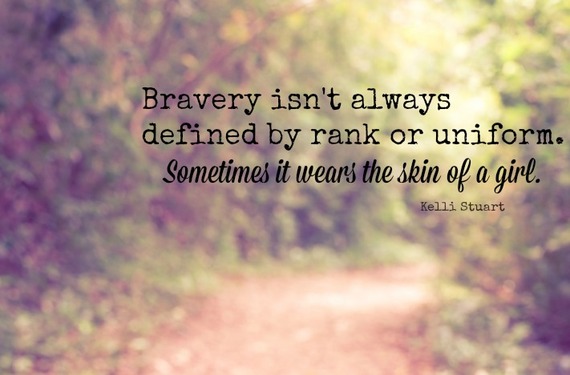 She sat across from me, her mouth turned up into a soft smile. With eyes crinkled at the edges, and a gentle lilt to her words, she took me back into the recesses of her memory.

It was 2003, and I was in Vinnitsya, Ukraine. Elizabeta agreed to meet with me on a brisk, March morning, and over a spread of tea and chocolates, she invited me into her story.

Elizabeta was sixteen when the Nazis invaded Vinnitsya. Unable to enlist in the Red Army, she found herself stuck, forced to live under the invader's imposed law, and unwilling to stand idly by while young boys with cropped hair took over her home. She wasn't, of course, the only one left heated with indignant pride.

A group of young men and women like herself formed a quiet group. Meeting weekly in the hushed corners of the local library, this pack of partisans made it their mission to fight a different kind of battle with the Nazis.

"We fought a psychological battle," she told me. The interpreter sat quietly by my side, whispering Elizabeta's every word like it was a sacred secret, and perhaps it was.

"We wanted those boys to know that though they had physical might, they did not have the power to break our spirit." She tossed me a mischievous glance. "And we won that psychological battle."

Not content to subject themselves to the Nazi's rules, Elizabeta and her comrades devised secret plans to keep the German soldiers ever aware of their own infallibility. "The Germans were afraid of us," she laughed. "We were unpredictable and shrewd. They never knew where we would strike next."

"I got very close to a Nazi once," she continued. "It was the most dangerous mission I participated in. But I was successful. Of course I was successful," she chuckled. "I'm here talking with you now!"

Late one evening in 1943, Elizabeta and her friend, Sophia, walked to a nearby market where German soldiers were known to congregate, and they openly flirted with two of the Nazis.

"We got those boys to come with us easily," she said, eyes twinkling. "We didn't speak German, of course, and they knew very little Russian, so most of the communicating took place with gestures. But if you can believe it, I was quite beautiful then, so it didn't take much to convince them to follow us." I smiled, because I could believe it. Behind the wrinkles and the grey hair, Elizabeta Yepifanova had striking features.

"We lured them to our safe house and had them take off their coats in the front hall. When we saw their guns, we pretended fear, and those boys were quick to lay their weapons down. They thought they'd get something from us that night, but we were the ones who got lucky." With a slap of the knee, Elizabeta let out a hearty laugh.

"We made them some tea, then excused ourselves from the table. While their backs were turned, we quietly and quickly grabbed their things and left the flat. We ran as hard and as fast as we could, and they didn't catch us."

She glanced out the window as she finished her story, sunlight bathing her weathered face. "I still laugh every time I think of what those boys must have looked like when they realized they'd been tricked by two teenage girls. I wonder what they told their commander when they returned that night." Her laughter cut through the room, and this time I joined with her.

In a small Ukrainian town seventy-three years ago, a teenage girl played a trick on a boy. It was a little thing, miniscule really, when you think of the vastness of World War II. But it was a moment of empowerment for that young girl and her friend - a moment when they stood up in the face of the enemy and refused to be afraid.

If the past illuminates the present, then we can all learn a little something from that gentle, grey-haired woman with the crinkled eyes and hearty laugh. Bravery isn't defined by rank or uniform. Sometimes it wears the skin of a girl.