Congressman Tim Ryan (D-OH) is, in many ways, a typical pro-life American. He opposes abortion and, because of that, supports every effort to prevent the need for it. Just like most pro-life Americans, Ryan supports contraception -- primarily because it is the most effective way to prevent unintended pregnancy, and thereby abortion. And yet because of this, Ryan no longer qualifies as "pro-life." He was recently banished from the board of a national pro-life group he served on for four years. Ryan, in return, has turned vocal. He's leading the call for common ground and pragmatism, and rallying the no longer silent majority of pro-lifers who support contraception. And he is provocatively trying to fight what he views as an unrepresentative slice of pro-lifers, those who can't bring themselves to support contraception. "The new fault line," says Ryan, "is not between pro-life and pro-choice people. It's within the pro-life community. The question now is: 'are you pro-life and pro-contraception, therefore trying to reduce the need for abortions, or are you pro-life and against contraception and you hope that people's lives improve just by hoping it, wishing it so.'"

Ryan is committed to preventing abortion so much so that he, unlike every other pro-life legislator in Congress, spent the last few years working to identify the policies proven to reduce the need for abortion. This work, which he undertook with The Third Way, a center-left think tank, resulted in the "Preventing Unintended Pregnancies, Reducing the Need for Abortion and Supporting Parents Act." It's also called the Ryan-DeLauro bill, named for him and his co-sponsor Rep. Rosa DeLauro (D-CT.) As thanks for his outspoken leadership in trying to make abortion less prevalent, Congressman Ryan was removed from the board of Democrats for Life of America, and with it, disowned by the pro-life movement at large. Pro-life publications have taken to qualifying his pro-life status as "allegedly" pro life or referring to him as someone "who claims to be" pro-life. Because of his support of prevention in 2007-2008 congressional session, Ryan received a "0" rating from National Right to Life Committee. According to the pro-life establishment's new standards, his support for prevention means he no longer qualifies as "pro-life." And that means very few pro-life Americans will either.

It may come as a shock to most pro-life Americans, but there's not one pro-life group in the United States that supports contraception. Rather, many lead campaigns against contraception. As Congressman Ryan explained, "I think the pro-life groups are finding themselves further and further removed from the mainstream; they're on the fringe of this debate." Considering that the average woman spends 23 years of her life trying not to get pregnant, the anti-contraception approach depends on a scourge of sexless marriages or a lot of wishful thinking.

Ryan's legislation increases funding for contraception, expands supports for poor women who wish to carry to term, backs comprehensive sex ed programs that have been proven to work, and creates more incentives for adoptive families. His bill is supported by many prominent pro-life individuals including, Dr. Frank S. Page, Rev. Joel Hunter, and Jim Wallis, and many pro-choice groups including Planned Parenthood and NARAL. Not one leading pro-life group signed onto the bill. 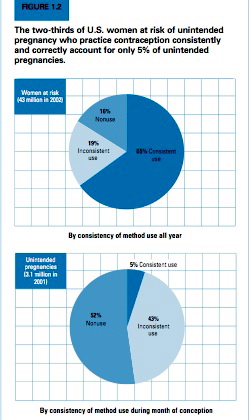 To his credit, Congressman Ryan did his best to try to convince pro-life groups of this. I spoke with Congressman Ryan last week after his press conference to announce his bill. He explained, "It was really frustrating to try to convince people that just didn't want to hear it. I went to the Democrats for Life of America's national board meeting that they had in DC a few years back and there were 50 board members or so and I gave them my pitch: If you're really for reducing abortions you've gotta be for contraception. I gave them all the statistics on unintended pregnancy and that most abortions take place for women within 200% of poverty and all this stuff and it just didn't resonate with them at all and so we had this stark disagreement and I got the boot."

The anti-contraception minority, which represents just 20% of pro-lifers, has disproportionate influence and, with it, hopes to derail common ground efforts the public has longed for. It's time for the disagreement over contraception to be addressed by the pro-life community at large. We will have no chance of making a real impact on unintended pregnancy and abortion rates without dramatic, informed strategies on prevention. The pro-life public must demand accountability and representation for their pro-contraception values. Considering that 80% of pro-life Americans support contraception, isn't it time to establish at least one pro-life organization in support of it too?

Congressman Ryan thought that would be a great idea. He predicted such a group would expose those who really aren't interested in reducing the need for abortion. "We have an opportunity here to solve this problem and give pro-life members of Congress and pro-life legislators a common sense approach to this and boy does it marginalize those people who have really beat the drum on the pro-life issue and have not provided any solution to it."

For breaking news and perspectives on common ground in the abortion conflict visit OnCommonGround or follow us on www.twitter.com/commongrnd