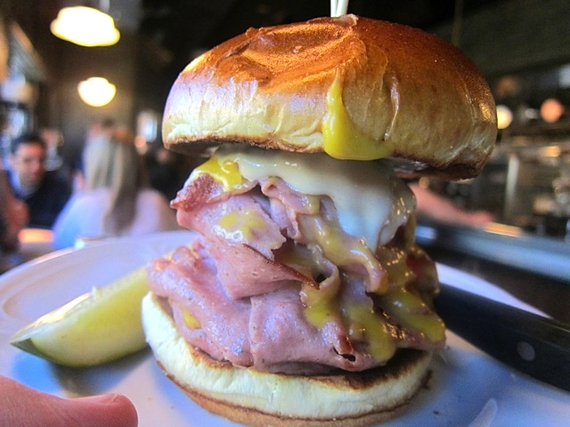 Fried Bologna Sandwich at Au Cheval...house-made bologna, that is!!!

About 20 years ago, Pat Wells, intrepid expatriate American restaurant critic, published a list of her favorite restaurants in the world in the International Herald Tribune, in Paris. It was a little ahead of its time for Americans. Pat structured her list to reflect the way Europeans think about restaurants: She posted ten formal restaurants, and ten informal restaurants. She did not try to tell us that one group was better than the other... just different. That's the way they think in Europe; full excitement for the three-star Michelin restaurant tonight, full excitement for the roast chicken at the amazing bistro tomorrow night.

But when we read the story in this country -- and it got lots of attention -- we focused on the formal list, with its rock stars like Joel Robuchon.

Lord knows, we were eating lots of burgers and pizza even then. But we weren't giving them the same respect we gave to Roast Pigeon with Foie Gras and Black Truffles at, say, Le Français in Wheeling, Illinois. Or to Quenelles de Brochet with Lobster Sauce at La Caravelle, in New York.

Things have improved mightily in America since then. The rise of food trucks, website obsessions, and, yes, Guy Fieri... has not only led to better burgers across America, to better funky food in general... but these things have sparked genuine excitement among "foodies" for all the things you can't get in three-star restaurants.

Two weeks ago, I would have said we're approaching a critical point in America. Someday soon, I would have said, our culture is going to spawn an informal restaurant with the same kind of "religion," the same kind of crazy ingredient obsessiveness, and the concomitant fever in its patrons that makes them feel not just "good" when sitting there... but makes them feel as if they have arrived at a temple of cuisine, a world marker... just as they always have at three-star restaurants.

My prediction was essentially right -- except that it was history, not prophecy.

I spent the very next weekend in Chicago, and found that such a place already exists.

My mind was simply blown by Au Cheval.

I crammed in two visits, and I daresay this is not only my favorite informal restaurant in America... this may well be my favorite restaurant of any kind in America today! I'm there! And so are thousands of others...

Most of them, in fact, are lined up at the door exactly when you want to eat. This is decidedly not a three-star restaurant, with a three-month maneuver to get in. No reservations. As I was putting my name on a list at the front of the house (which can lead to as much as a 2/12 hour wait), I was told that if the owner himself wanted a table he'd have to go through the same waiting list.

As you're looking at your watch, and calculating whether you want to nurture pre-dinner drinks for an eon or so, you'll notice the impossible crush of humanity around you. Hip and hungry humanity. You are all at the resto-rich corner of Randolph and Halsted, a spot that's technically in Chicago's "Greektown" -- but the Greek restaurants are a few blocks south of here, and people often say this is actually West Loop. There are a lot of bars, but no bar like this one. 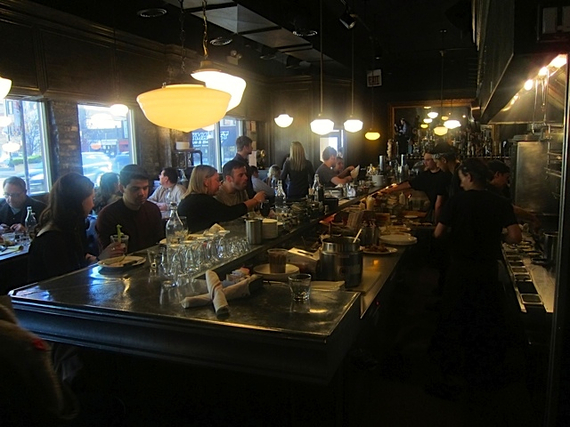 The counter, banquettes and windows at Au Cheval 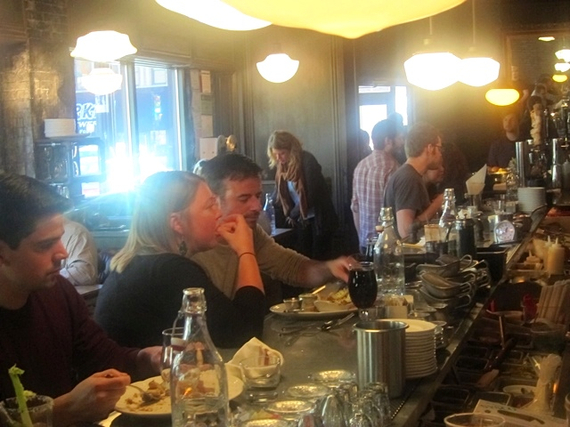 Sitting at Au Cheval's counter, informal all the way

It is a long zinc bar, running practically the whole length of the narrow restaurant but lo! It is more properly described as the counter of a diner. Chefs are cooking the food behind the counter -- most notably hamburgers, on a well-seasoned griddle top. Amazing meaty-fatty smells are wafting over the counter stools, to the well-proportioned, tufted-leather banquettes (choice seating!) that line the big wall of windows. And there are a few tables in back.

That's it. A bar. A diner. Dark and brown, but with comforting old-fashioned details. (Working image for Au Cheval: a place where a bunch of Chicago sportswriters in the 1940s might have cried in their beer about the fortunes of the Chicago Cubs.)

The owner is anything but old enough to have remembered that. He is the restaurant wunderkind of Chicago, Brendan Sodikoff, still in his thirties -- and with a bottomless passion for detail that has spread across Chicagoland in multiple restaurants with runaway success. The Chicago Sun-Times even compared the "ideology and effort" of Au Cheval to the ideology and effort of Next -- the big-deal fancy place opened last year by Chicago's God of fine dining, Grant Achatz!

So why all the fuss?

For starters, the choice of name at this place says a lot. "Au Cheval" literally means "on horseback" but in France, if a food on a menu is described with that phrase, it means "a fried egg on top." 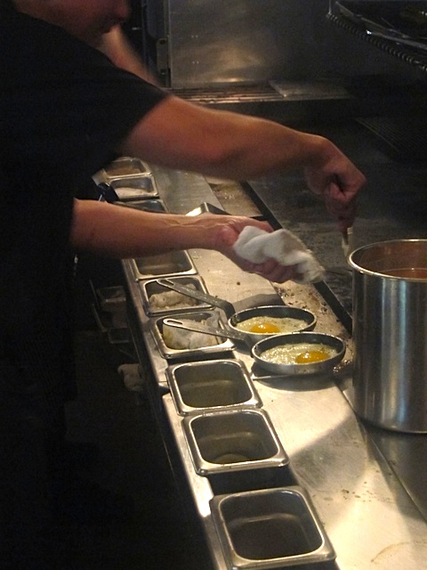 The eggs, fried one at a time in individual pans, are crispy, eggy, delicious. But I like them most as a dominant metaphor: "whatever rich, juicy, runny food you're eating -- Au Cheval will make it richer, juicier, more runny by adding a sunny-side-up fried egg!"

Everything here coheres in this way. If for some reason you're fat-shy, don't get anywhere near this place! Au Cheval offers more animal-fat mouth-satisfaction than a bevy of steakhouses and in a dazzling variety of ways all inextricably linked with New Food America's burgeoning quality imperative. 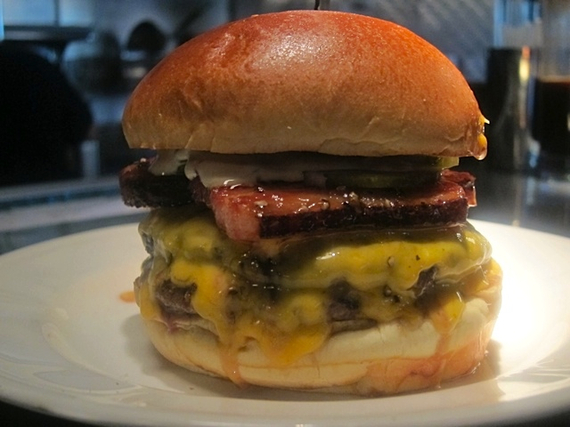 The "single" hamburger at Au Cheval

Of course, the most famous fried-egg garnished dish is the hamburger simply described on the menu as "single cheeseburger." I'm not trying to hyperbolize my hyperbole but this may well be the best burger in America. For starters, forget about this "single" crap. A "single cheeseburger" is two amazing patties (and a "double cheeseburger" is three). The darling grill of California is denied here, in favor of hot sheet metal which, in the opinion of many, creates a beefier-tasting burger. This one is all loose beef-and-butter. Your waiter will immediately ask you if you want a fried egg and bacon on the sandwich, and you'd be crazy to say no. The bacon alone is a masterpiece: thick, very cured, very tender, sweet slices of it. The cheese runs like Velveeta gone to heaven. The soft-fluffy-flavorful bun is there to accommodate the burger, not to establish bragging rights. And the house throws on its own whim-list of condiments, including the perfect bread-and-butter pickles (with tossed onions and red peppers) made right on de premises.

But you can get your egg in a variety of supernal ways: on a toasted open-faced ham & cheese fondue sandwich; on crispy fries with mornay sauce and garlic aioli; on chilaquiles (only after midnight); and... my favorite... on crispy potato hash with duck heart gravy. 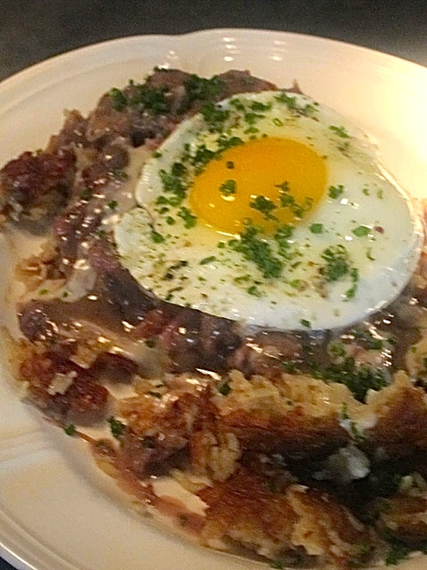 Then, the menu offers any number of wacky things turned into obsession. On my second visit I was initiated into the rites of the fried-bologna sandwich... 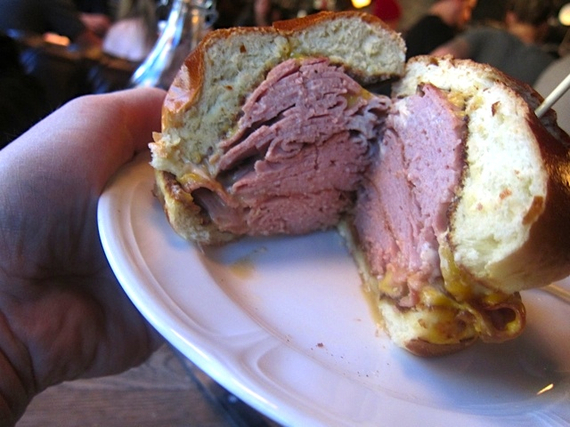 The fried bologna ready for delectation

Each thin slice does a slippery foie-gras number in your mouth, the sexiest bologna in history to be sure. And the flavors are subtle, porky, farm-y -- not the industrially-spiced flavors that bologna usually brings.

I cannot wait to go back (worth a flight to Chicago!) for the chopped chicken liver, the foie gras terrine (another form of chopped liver!), the 32-ounce pork porterhouse with foie gras, the griddled bratwurst with roasted garlic gravy, and many more.

And many more beers as well, from the major, rip-roaring beer list! I loved the Krombacher Pils from Bavaria, just the kind of crisp beer I adore with hearty food. But if your tastes in beer itself run heartier, there are dozens of esoteric-but-delicious beers on the list, many of them from the U.S. (I want to work my way through the American micro-brews, like the Local Option Kentucky Common, aged in bourbon barrels). There are also delicious cocktails. The loaded Bloody Mary is the stuff of legend... 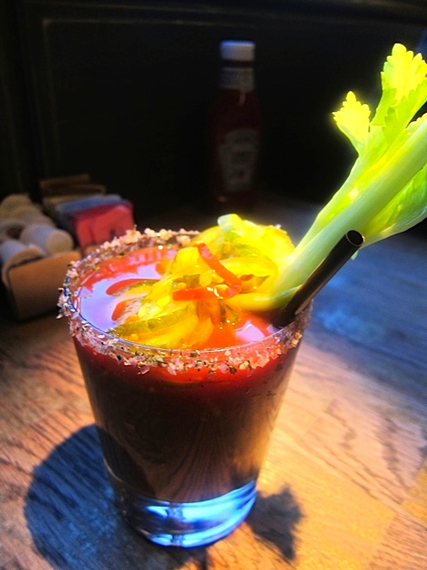 The Bloody Mary at Au Cheval

... and the Dr. Devon's Pickleback is the finest "pickleback" I've ever had. If you're not familiar with the pickleback, what are you waiting for? Very trendy among Generation Y, the pickleback juxtaposes a shot of Irish whiskey, and a chaser of pickle juice. This is the finest one I've ever had, of course: The whiskey is bracingly cold, as is the -- house-made! -- pickle juice. I don't dare contemplate how many of these I could drink while waiting for my burger ecstasy.

Okay, deep breath. Once again, the only problem with Au Cheval is that every restaurant-worshiper in Chicago wants to go there. If you arrive at 6 p.m. or 7 p.m., you probably won't be eating until 9 or 10 (p.m.). On my Thursday-night visit, at about 11 p.m., I had to drink in a bar across the street for "only" 45 minutes or so. Best of all was my Sunday lunch visit -- but at 11 a.m.! -- when the table wait was only 30 minutes or so. And the menu is basically the same.

This is NOT just a diner gone upscale. In fact, nothing about it on the surface says "upscale." Au Cheval is more than that: Tt has established itself as a can't-miss stop on this country's delicious itinerary of important, life-changing restaurants.