I thought death would be serene and gentle, a restful slipping from life into lifelessness, the mind clinging to the last moments while the body succumbed. Yet the act of breathing is a persistent habit. Even if death is desired, consciousness pleading for the final dream, the body endures, an act of primal hostility against surrender as it wrestles for every last second of life -- air in, air out, air in, air out...

It had been two days since she had softly pleaded with doctors to end her treatment. The plastic pipes pushing food and water directly into her stomach had been retired; the medicines designed to march on the infection had similarly been withdrawn. Morphine was now her only sustenance but supplied in cruelly small and regimented doses.

Time passed no longer in hours but in intervals between shots of medical opiate. There was no final cocktail, no caring push into death. Each injection was followed by a period of sleep, then a sad awakening, her eyes straining up and right to see the walled clock, briefly fixating on the passing of time that, for her, refused to end. She was enslaved in a hospital room; a prisoner on a plastic mattress, shackled by her own body and its relentless need to breathe.

In the early morning of the fourth day, she started to drown. The liquid building up in her throat entered her lungs, shocking her awake with fear, desperation and perhaps a realization that after seven months of sickness, suffering and depression, the dénouement would now be the hardest part. Yet the body continued, each breath now carrying an orchestra of deep rattles from within her beleaguered frame, the sound of air and water moving making her almost mechanical, a broken machine whose spring had yet to fully unwind.

She remained awake as her lungs slowly flooded, occasionally trying to force words between the tin-like clatter shaking out from her chest, her half-dead hands clamping to those of the living perhaps in pain, perhaps in disbelief that her end had to be so punishing. Her now-graying eyes told only of distress.

Finally, the metronome started to slow; fingernails turned blue as the air supply dwindled. On that small, unwelcome sheet, one arm under her head, the other grasping her hand, our eyes remained fixed as I watched the final scene of her life's play, each breath now further apart and slightly shallower than the last.

And then there were no more.

I walked to my mother's funeral on my own. There was no procession, no ride in a hearse; just a stroll from an empty hotel room to the crematorium, a functional brick outhouse circled by ornate grounds with small birds moving between the headstones.

Next to the door was a sign exacting the day's services. She was third on a list of seven, her printed name resting between two strangers in this surreal, random roll-call of death.

Yet there was serenity here, in this place among the stones of those that had gone before. She had not slipped into death, but had been tortured, punished by her own body in a sickening coda to life. But the savagery had gone and the brutality had ended. All now left was the silence of a large wooden box mantled by curtains that slowly closed. 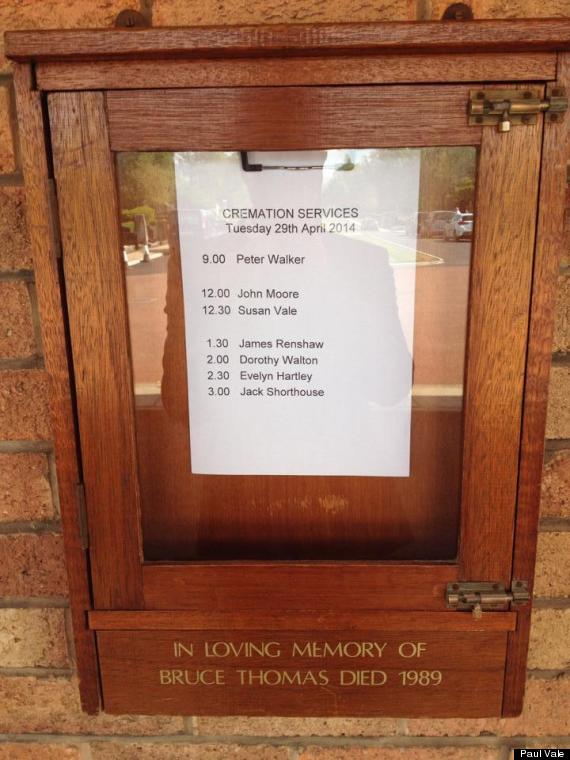